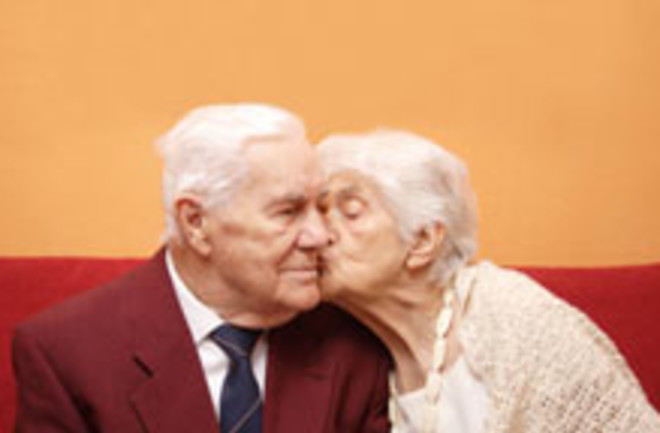 Who ever thought that couples could bond over nasal spray? But new research shows that a nasal spray containing the "love hormone" oxytocin helped make regular guys more empathetic and less gruff. Oxytocin is the hormone that strengthens the bond between nursing moms and their babies, and it's also involved in pair bonding, love, and sex. The spray was tested on a group of 48 healthy males--half received a spritz of the nose spray at the start of the experiment and the other half received a placebo. The researchers then showed their test subjects emotion-inducing photos like a bawling child, a girl hugging her cat, and a grieving man. Finally, they asked the guys to express how they felt. The placebo group men reacted normally to the soppy pictures; which is to say they were either mildly uncomfortable or stoic. Whereas the group that had used the nasal spray were markedly more empathetic. The Register reports:

"The males under test achieved levels [of emotion] which would normally only be expected in women," says a statement from Bonn University, indicating that they had cooed or even blubbed at the sight of the affecting images.

The study's findings, published in The Journal of Neuroscience, suggest one trite application of the hormonal spray: Maybe a woman could give her undemonstrative husband a quick spritz to get him to really feel her pain, or to get him to coo over a kitten properly. But there might be a larger medical purpose too. Researchers recently found that a dose of oxytocin can help autistic people become less awkward and more social. Now, they're hoping that medication can also be developed to help socially withdrawn schizophrenics. Related Content: 80beats: Study: The “Love Hormone” Oxytocin Can Improve Autistic People’s Social Skills 80beats: The “Love Hormone” Oxytocin Helps People Recognize Faces They’ve Seen Before DISCOVER: A Dose of Human Kindness, Now in Chemical FormImage: iStockphoto

More From Discover
Health
What is Long COVID and What are the Symptoms?
The Sciences
Your Body, the First 5 Minutes After You Die
Health
The Surprising History of the Bidet Started with the Wealthy and Brothels
Health
Forget A "Twindemic," Experts Anticipate A "Tripledemic" This Winter
Health
Are COVID-19 "Rebounds" Only Possible After Taking Paxlovid?
Health
Navigating Hearing Loss And New Over-the-Counter Solutions
Recommendations From Our Store
My Science ShopDiscover STEM Kits
My Science ShopDiscover 2022 Calendar
My Science ShopStrange Science
My Science ShopElements Flashcards
Shop Now
Stay Curious
Join
Our List