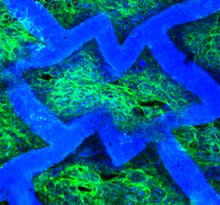 Researchers have built a honeycomb-like scaffold that resembles natural heart tissue, and found that when they seeded the artificial structure with heart cells from young rats the cells grew and joined together in an approximation of normal heart muscle.

The cells had also formed electrical connections with one another, allowing them to contract in coordination – and when an electric field was applied along the long axis of the honeycomb, the cells indeed contracted. "You could see the cells 'beating' on the scaffold," says [study coauthor] George Engelmayr [New Scientist].

Other researchers have constructed biodegradable scaffolding on which to grow different types of tissue, but heart tissue poses particular technical challenges.

Heart tissue must be flexible enough to change shape as the heart contracts, but also strong enough to withstand the intense forces generated by these contractions. So, the researchers used a polymer.... "It's elastic like a rubber band," Engelmayr says, so it can withstand repeated stretching while only gradually losing strength as it degrades [Technology Review].

In the study, published in Nature Materials [subscription required], researchers found that an accordion-like polymer structure caused the cells to contract in one direction, while remaining rigid in the other direction. In the short term, researchers say the heart simulacrum would be useful for testing heart drugs in the lab. If the system is approved for human use, the technology could eventually be used for "patches" to mend the hearts of patients who have had damaged tissue removed after a heart attack, or for children with congenital heart defects. Farther still down the line, scientists want to