Warren Moon always wanted to be a quarterback. He had all the physical tools, as well as tremendous leadership abilities and a fierce determination to win. Only one problem: he was black. As stupid as it may sound, not too long ago conventional wisdom held that black people couldn't be quarterbacks -- they were athletes, not thinkers. Moon was a successful high school football player in LA, despite playing in the kind of atmosphere where you received death threats from gang members playing for the opposing team. But he couldn't get a scholarship offer from a major college. Well, that's not exactly right -- he did get offers, but only under the condition that he switch positions to running back or defensive back. One school, Arizona State, recruited him as a quarterback, but rescinded their scholarship offer after they signed two other (white) quarterbacks. 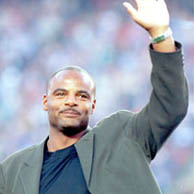 Determined to play the position he wanted to play, Moon went to junior college for a year, where he personally sent game films to major programs throughout the country. He was finally offered a scholarship by the University of Washington, where the team had been plagued by racial tensions. At UW he was the target of relentless taunting from fans, and his own teammates expressed skepticism of his ability. Nevertheless, in his senior year Moon led the Huskies to their first Rose Bowl in fifteen years, where they beat Michigan in a stunning upset. Moon was named MVP of the Rose Bowl, but when the NFL draft came around, nobody was interested. He wasn't invited to any combines or private workouts for teams. Word was out that he refused to convert to defensive back or tight end, which were the only positions at which NFL teams would consider him. As Moon put it, "The quarterback is the face of the organization, and white owners still weren't ready for that face to be a black man. The owners wanted somebody to take to the country club, and they weren't ready for that to be a black man." Undaunted, he signed with the Edmonton Eskimos of the Canadian Football League. In six years in the CFL, he led the Eskimos to five Grey Cup championships, winning two championship-game MVP awards, and set a league record for passing yards in 1983. He was inducted into the CFL Hall of Fame in 2001. The NFL finally caught on, and Moon was signed by the Houston Oilers in 1984. He and his family were again the subject of death threats, and his wife and children were eventually forced to watch the games from a private stadium box. After one game in 1991, on the verge of signing a new contract, he had to explain to his nine-year-old son what it meant when a fan in the stands had yelled "I can't believe they gave that f------ n----- $14.3 million." Moon persevered, setting the Oilers club record for passing yards in his first year, but didn't really come into his own until his third year in the NFL. He led the league in passing in 1990 and 1991, joining Dan Fouts and Dan Marino as the only quarterbacks to ever post consecutive 4,000-yard seasons. He went to the Pro Bowl nine times. By the time he retired in 2001, he was third all-time in NFL passing yardage behind Marino and John Elway, despite having played his first six years in the CFL. If he had played in the NFL for those six years, throwing for 2,500 yard per year (an extremely conservative estimate), he would have finished his career as the league's all-time leading passer by a substantial margin. Warren Moon wasn't the first black quarterback in the NFL, but he set an example that made it enormously easier for others to follow in his footsteps. There are now several African-Americans starring at quarterback in the NFL; sufficient evidence, in the eyes of some, to say "See? Racism doesn't exist!" Ignoring decades of history, they will tell you with a straight face that the competitive pressures of running a professional sports franchise make it impossible to be racist, since any non-racist organization will be able to scoop up all the undervalued players. (Somehow that sounds familiar.) This from the same folks who, not too long ago, argued that "the White community" was entitled to disenfranchise blacks because Whites were "the advanced race." Today, Warren Moon is being inducted into the Pro Football Hall of Fame, becoming the first player ever to be in both the CFL and NFL Halls -- oh yes, and the first black quarterback to be inducted. Congratulations, Warren; thanks to the example you set, you won't be alone for long.