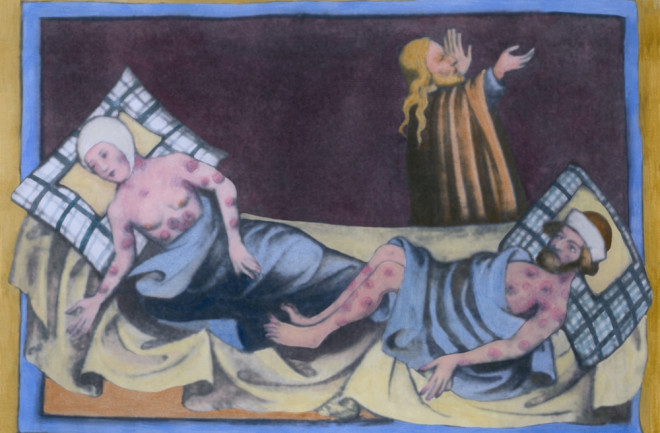 A medieval painting from a German-language Bible dated to 1411 from Toggenburg, Switzerland. The Bubonic plague’s characteristic buboes are on the people’s bodies. (Credit: Everett Historical/Shutterstock)

If so, you can at least take some comfort in the fact that it isn’t the first time in history that people have had to deal with such problems. Life under pandemics such as the Black Death or the 1918 influenza outbreak entailed many of the same conditions we are experiencing today — and many that were much worse.

By far the deadliest recorded pandemic, the Black Death probably originated somewhere in Asia in the 14th century. By 1347 it had reached Crimea, and from there the plague — which was carried in fleas that lived on and infected rats — spread through the rest of Europe and North Africa. The first outbreak wiped out anywhere from a third to two-thirds of Europe at the time (75 million to 200 million people), while recurring waves of the bacterial disease continued to affect parts of the world for centuries.

“That’s really something that puts COVID-19 into humble proportion,” says Philip Slavin, an associate professor of medieval and environmental history at the University of Stirling in the U.K.

The Black Death caused massive upheavals in European society. Local parishioners led religious processions asking their God for help, while others whipped themselves in public in the belief it might ward off the disease. “You have a really mass hysteria,” says Slavin, adding that, given the level of sudden death, the pope even allowed men and women to become bedside confessors since clerics were having a hard time keeping up with last rites.

Conspiracy theories also abounded as to who had caused the pandemic, prompting several massacres of Jews in Germany and the killings of people with leprosy.

Some cities practiced social distancing with some success. Slavin says that only 15 percent of Milan’s population was wiped out, due possibly to some degree of social distancing, while the city that is now Dubrovnik instituted one of the earliest known public quarantine initiatives, sending newcomers to an offshore island for 40 days during an outbreak in 1377.

About 1,500 years ago, just as the Byzantine Empire was rising to dominance under Emperor Justinian I, plague struck the capital of Constantinople. It may not have been as devastating as the later plague of the 1300s, but the Justinianic Plague still cut a wide swath through parts of Europe and the Byzantine Empire. Caused by the same bacteria as the Black Death, the disease put a temporary stall on the war with the Sassanid Empire in Persia. Even Justinian himself contracted the disease in the 540s, though he recovered.

Lee Mordechai, a historian at the Hebrew University of Jerusalem, says the plague changed a number of things in the Byzantine Empire. Burial customs became rather hasty, and some citizens wore bracelets engraved with their names so people could identify them if they died away from home.

The working class had to keep working while some of the elites fled infected cities. But the streets were mostly empty in Constantinople, one of the largest cities in the world at the time with a population of about half a million. Many scholars believe that between a half and a quarter of the population of the city was killed during the pandemic, though Mordechai believes these estimates are exaggerated.

There were some rumors of disease profiteering in the form of the greedy looting of bodies, empty homes or even whole towns. And ghost stories circulated about malevolent demons or spirits that caused the pandemic, according to Mordechai.

Political pandering likely occurred during the Justinianic Plague, with people overreporting or underreporting the mortality rate based on whether they supported the emperor or not, says Lauren White, a researcher at the National Socio-Environmental Synthesis Center in Maryland and a co-author with Mordechai on a recent study about the death toll of the disease.

It was the 16th century and Mexico was still in the midst of massive cultural and social upheaval caused by the Spanish conquest and related smallpox pandemic, when the cocoliztli disease struck present-day Mexico City. The effects were devastating on the region and may have killed as many as tens of millions, says Christina Warinner, an assistant professor of anthropology at Harvard University.

Franciscan scholar Bernardino de Sahagún experienced three waves of the disease, recording them in the Florentine Codex — a massive work chronicling a number of aspects of Aztec life, beliefs and history. Sahagún contracted the disease shortly after arriving in New Spain in 1545, then described the widespread effects of the second wave in 1576.

“He describes just enormous amounts of people dying per day,” says Warinner, adding that the various waves are thought to have killed millions of indigenous people, Africans and Europeans, and likely ranged widely through Mesoamerica and possibly to South America. Researchers aren’t sure what caused the disease, though one study by Warinner suggests it may have been related to a poorly known strain of salmonella.

The Dominicans, prevalent in the area at the time and normally concerned with fully educating potential converts to Catholicism, became worried about the number of souls they were losing as the bodies racked up before they were converted. They started conducting mass baptisms in public squares.

“They definitely thought of it as apocalyptic,” Warinner says.

The health systems at the time also became overwhelmed with the sick. “They were dying of exposure. They literally didn’t have people to care for them,” Warinner says.

Just as COVID-19 shut down meat processing plants, the pandemic in the 1500s affected food production in individual homes — milling flour was largely done on a household basis. Losing family members to disease affected the sustenance of whole families, and Sahagún wrote that people died from hunger, Warinner says.

Sahagún apparently didn’t contract immunity from his first encounter with Cocoliztli, as another wave of the disease killed him in 1590.

The 1918 flu is often overshadowed by World War I, but the disease likely killed far more people than the fighting did. Often referred to by its misnomer, the “Spanish Flu” — due to the fact that Spain didn’t censor its newspapers about the spread of the disease the way other countries embroiled in the war did — the outbreak of the H1N1 influenza A virus may have killed 100 million people, says Jim Harris, a history lecturer at Ohio State University.

Much like the ongoing experience with COVID-19, countries and cities committed a number of mistakes that helped the disease spread. Places that failed to lock down experienced higher levels of infection — Philadelphia had a parade in the midst of the pandemic and had one of the highest death rates per capita — while the movement of soldiers during the war abetted the spread of the disease, Harris says.

But a number of things actually differed between the 1918 flu outbreak and the current COVID-19 pandemic. Local newspapers a century ago tracked the spread and counted deaths, giving an accurate account of infection. Nothing he’s seen has shown people at the time tried to manipulate stats or “massage” the issue, Harris says, noting the type of political factionalism seen today surrounding disease didn’t happen as much in 1918 — perhaps because the country was relatively united in the face of WWI.