You've likely heard of these swirling whirlpools of energy in the body, but scientists are still figuring out how to study them. 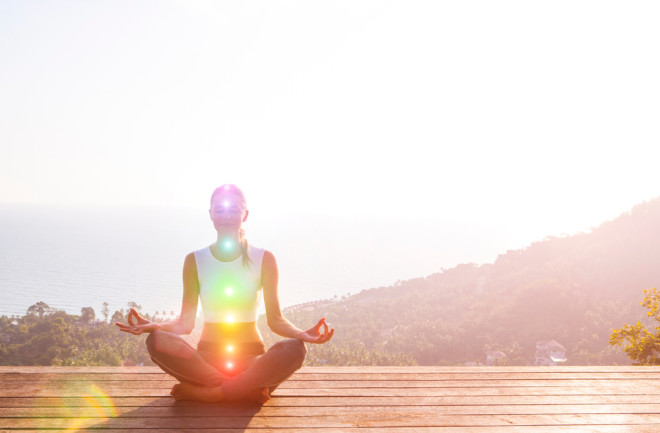 According to the tradition of yoga and many New Age practices, the chakras are vital centers of energy that exist in all of us. While these constantly spinning energy vortexes are not visible to the human eye, they’re thought to be essential to our ongoing development and health as human beings, says Karla Helbert, a licensed counselor, yoga therapist and author of The Chakras in Grief and Trauma.

“I think of them as invisible energy organs, each one self-contained and having functions that impact all parts of the whole,” says Helbert.

The chakras were first mentioned in ancient Vedic and Tantric texts, some of the oldest Hindu writings, dating from 1500 to 500 B.C. The seven main chakras are supposedly stacked upwards on top of one another along the spine, starting with the root chakra at the base of the spine; the sacral chakra just below the belly button; the solar plexus on the upper abdomen; the heart chakra at the center of the chest; the throat chakra at the throat; the third eye chakra located between the eyes on the forehead; and the crown chakra on top of the head.

According to Helbert, the chakras are constantly moving at varying speeds in an effort to maintain homeostasis in the body, each one governing different physical and mental components of our being. The three lower chakras are linked to our “earthly” existence, including our survival instinct, reproduction and self-confidence. The heart chakra is linked to empathy and acceptance of others, and the upper three chakras are linked to less physical attributes, including self-expression, intuition and “our connection to the divine.”

When our chakras go out of balance — or become “blocked,” a phrase you may have heard spouted by certain spiritual characters in pop culture — it purportedly causes certain negative results. For example, an imbalanced sacral chakra is associated with fertility issues and a blocked throat chakra means you have trouble expressing yourself.  “The chakras regulate functions that effect us on all levels: physical, mental, emotional, intuitive, spiritual and sensory,” says Helbert.

A Connection to the Endocrine System

In modern times, the chakra system has been linked to the endocrine system, with certain glands correlated to certain chakras, says Helbert. For example, the root chakra correlates with the testes or ovaries, the throat chakra with the thyroid gland and the heart chakra with the thymus. Each one of these endocrine glands supposedly has something to do with the functions associated with that chakra.

While these ideas fit snugly into a more modern explanation of the chakras, there’s no scientific evidence to back them up. “This is really a Western point of view and we don’t have any data to prove the connection,” says Shamini Jain, a psychologist and researcher at the University of California, San Diego, and author of Healing Ourselves: Biofield Science and the Future of Health.

As a whole, there’s currently no meaningful way of measuring the chakras scientifically. To Jain’s knowledge, it hasn’t really been attempted since 1978. “The most robust work in trying to measure the chakras was under Valerie Hunt at UCLA in the 1970s,” says Jain. Hunt used electrodes at various points along the chakra system — for example, an electrocardiogram at the heart — to measure changes energetically in the body. But to date, we haven’t been able to detect chakra energy partially because the chakras don’t work in isolation, they work in coordination, so it would be difficult to isolate one of them to study, says Jain.

A 2005 paper published in Evidence-Based Complementary and Alternative Medicine mentioned the non-visible energy of the chakra system but didn’t investigate the practice. “The chakras are the energy transducers for subtle energy. Subtle energy is a healing energy that anyone can learn to perceive and utilize. It is a crucial, but often missing, component in health care,” the authors write.

Other research efforts have investigated similar systems of healing energy. A number of studies have also looked at reiki, a Japanese healing-energy technique that employs the use of gentle physical touch, and its impact on lowering anxiety, depression and pain, as well as improving wellbeing. Research has shown that the technique can be effective, but scientists don’t know the mechanism behind its success - for example, whether it’s due to this energy working or whether the practice itself is simply relaxing, therefore reducing the impact of stress on the mind and body.

Overall, Jain says, it’s often difficult to get funding for the large-scale research we would need to better understand the chakra system and healing energy as a whole. This is largely because energy isn’t material, meaning you can’t see it. “We’re comfortable with the idea that a drug can fix problems but we’re not comfortable with energy doing the same thing because many don’t believe that energy is real,” she says.

But Jain hopes that this will change. “If you could measure changes in your energy biofield before you got physically sick, you could potentially prevent disease.” And that, says Jain, is a code worth cracking.

More From Discover
Mind
Nostalgia and Thinking About the Future Can Be Good For You
Health
This is How Much Water You Should Actually Be Drinking Each Day
Health
A Blood Test That Screens For Multiple Cancers At Once Promises To Boost Early Detection
Health
Decorate For the Holidays Early and it Might Improve Your Mood
Health
What You Can Do About Seasonal Depression
Health
Forget A "Twindemic," Experts Anticipate A "Tripledemic" This Winter
Recommendations From Our Store
My Science ShopDiscover STEM Kits
My Science ShopDiscover 2022 Calendar
My Science ShopStrange Science
My Science ShopElements Flashcards
Shop Now
Stay Curious
Join
Our List