The so-called Asian glow, or alcohol flush reaction, results from a genetic intolerance to alcohol. A pill that can prevent facial redness and other effects while drinking has long been a dream for sufferers. 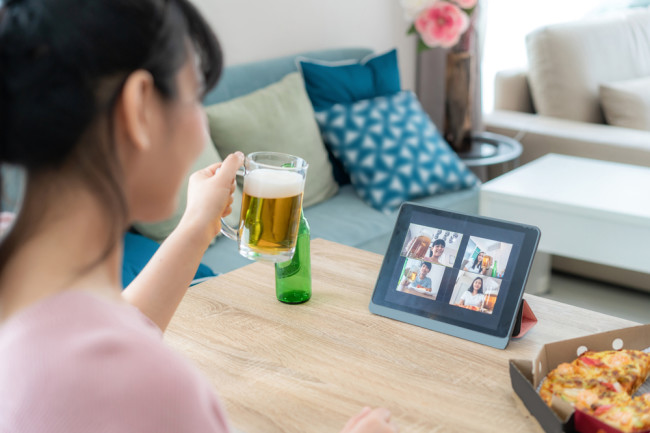 When Asians want to party, they know there could be a snag. They could be struck by — what’s affectionately called — the Asian flush.

Approximately 50 percent of people with Chinese, Korean and Japanese ancestry experience alcohol flush reaction while drinking because of an inherited genetic mutation. As a result, their bodies are deficient in a key enzyme needed to break down alcohol. A sip or two of the hard stuff can be all that it takes to trigger a warm, red rash across the face, chest, and arms. Because this alcohol-included glow can be inconvenient, uncomfortable, and maybe even a bit embarrassing, Singaporean entrepreneurs Solomon Poon and Ryan Foo saw an opportunity to create a remedy.

They’ve launched DrinkAid, a supplement they claim will keep the dreaded flush away if taken a couple of hours before the boozing begins. While Poon and Foo are not the first to try and tackle this side effect, Poon says that sufferers often turn to products that aren’t designed to treat it. “One of the famous solutions is a medication called Pepcid, a histamine blocker,” says Poon. The histamine blocker may slow skin redness, but sufferers generally still experience the other symptoms of the condition, such as headaches, nausea, or rapid heartbeat.

When DrinkAid launched in August 2020, Poon and Foo say orders were placed from around the world. But not everyone’s tickled pink with the prospect of anti-flush pills.

Michael Kenny, an internal medicine physician in Los Angeles, isn’t convinced that supplements for alcohol flush reaction actually work. “These supplements contain ingredients that should theoretically protect the liver,” says Kenny. “They have not been shown to consistently prevent Asian flush in clinical studies, and these products are not FDA approved.”

But despite this, Foo and Poon say that consumer demand for DrinkAid is strong. And, they stand behind their supplement, which they say targets the root causes of the redness.

The flush is the result of the body’s inability to break down acetaldehyde, which is a toxic byproduct of metabolizing alcohol. Normally, this byproduct is converted into harmless compounds by a liver enzyme called aldehyde dehydrogenase, but according to Esteban Kosak, a physician based in Venezuela, people who flush while drinking alcohol have an inactive version of this enzyme.

“A large majority of people, many of whom are of Asian descent, do not produce aldehyde dehydrogenase because of a gene mutation that has evolved over time," he says. "The result is that those with the mutation accumulate six times more acetaldehyde, which is highly toxic." The severity of the condition depends on whether one or both parents passed on the gene mutation that causes the inactive enzyme.

Because acetaldehyde has been studied extensively by researchers, Poon and Foo began their search for flush remedies by scouring research from Korea, Russia and China. Often, the research in this area focused on potential hangover cures and reducing liver damage. Poon and Foo specifically searched for ingredients that might help the body get rid of acetaldehyde more quickly — which, they believe, can stop the flush before it even starts.

Eventually, Poo and Foon stumbled on the ingredients that would form the basis of their DrinkAid supplement. “We used succinic acid to improve liver function and Japanese raisin tree [Hovenia dulcis] to break down the acetaldehyde,” says Poon.

The leaves, bark and fruit of the Japanese raisin tree have a long history of use as a hangover cure in Eastern medicine. How raisin tree exactly works in the body, and its effect on acetaldehyde processing, is still poorly understood.

However, a small study found that men who carried one copy of the gene mutation associated with alcohol intolerance experienced fewer hangover symptoms if they took raisin tree fruit extract together with alcohol as compared to a control group. The work, which was published in Journal of Ethnopharmacology, noted that the extract might have tamped down the inflammatory response associated with alcohol consumption.

This year, a study published in Alcoholism: Clinical & Experimental Research might offer clues into the role of a compound in the raisin tree called dihydromyricetin. Among mice with liver damage, it promoted the production of enzymes that can break down alcohol, and made the enzymes more efficient at doing their job. Among the mice, the researchers also observed that the compound reduced some effects of heavy alcohol consumption on the liver, such as cell damage and fat accumulation. More insight is needed into whether this could help people who don’t produce adequate levels of aldehyde dehydrogenase, the key enzyme needed for alcohol metabolization.

Succinic acid, another ingredient in DrinkAid, is found naturally in a wide variety of foods. It’s thought to play a role in the production of ATP, or adenosine triphosphate, which is an energy-storing molecule that’s essential to cell survival. Heavy alcohol consumption might decrease ATP levels in the liver, and this could be a factor that contributes to the development of liver disease and cirrhosis. However, whether or not taking a supplement with succinic acid can ward off alcohol-related liver damage is unclear, based on current research.

Poon and Foo say they tested DrinkAid on a small group of 30 college-aged students, and 98 percent reported no hangover and reduced alcohol flushing. However, claims around DrinkAid have not been independently verified. And similar to the FDA in the U.S., Singapore’s Health Sciences Authority doesn’t regulate supplements as medications. This means that supplements aren’t held to the same rigorous safety and efficacy requirements that many drugs are.

More Than a Red Face

Kenny, the physician in Los Angeles, is a sufferer of alcohol flush himself. He raises awareness about the condition on his YouTube channel, and says that the skin reaction is a red flag for other potential diseases. Researchers have found that sufferers are at a greater risk of developing esophageal cancer, and a link to Alzheimer’s is being explored.

Kenny also says there needs to be a better solution for people who experience alcohol flushing, and are likely to turn to Pepcid when they drink. Pepcid might keep some symptoms away — but in turn, it may cause someone to drink more, and it doesn’t do anything to prevent the toxic build-up of acetaldehyde.

Kenny has tried supplements to ease alcohol flush. But he says that, anecdotally, he’s “seen inconsistent results in preventing the flush, but some are a little more consistent in preventing massive hangovers the next day.”

If you suffer from the flush and you still want to enjoy your favorite adult beverage, Kenny suggests that you drink slowly, stay hydrated and never drink on an empty stomach. “The choice of alcohol can be important,” he adds. “Stay away from dark drinks like red wine that have tannin, which can also make you flush, and try lighter drinks like [spiked] seltzer or vodka.”

HealthNature's Masterpiece: How Evolution Gave Us Our Human Hands
Recommendations From Our Store