Bloodletting and leech therapy has a long and storied past. For thousands of years, physicians and healers have employed the bloodsucking leech to treat myriad conditions that assail the human body, the original panacea that would treat anything from “farts to fevers.”(1) The ectoparasite was the ancient physician’s most versatile treatment and so essential that its very name, derived from the Anglo-Saxon word “loece,” refers to a physician or healer and indicates the degree to which worm and doc have long been deeply entwined.(2) 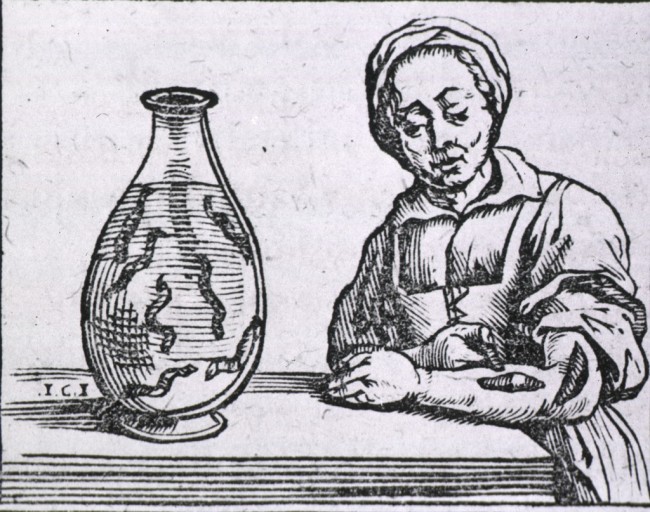 A Belgian woodcut dating from 1639 depicting a woman placing leeches on her arm. On the table next to her is a large jar containing leeches. Image: Guillaume van den Bossche, The National Library of Medicine. Click for source.

The medicinal leech, Hirudo medicinalis, is a parasitic invertebrate that relies on the blood of animals to survive, typically feeding on fish, snails, turtles, and the occasional human that tracks into its freshwater habitat. A posterior sucker latches onto their host as they suckle free-flowing blood from the anterior sucker that harbors three cartilaginous jaws lined with a hundred minute fangs. In a single feeding, they can drain 5 to 15 milliliters of blood, over five times their own body weight (3). After they have detached themselves, dense and swollen, an additional 50 to 100 milliliters of blood will ooze from their prey for an additional day or two due to the lingering effects of, to put it poetically, leech drool.(4) The leech’s ability to induce free blood flow in their unlucky host is the result of the unique properties of leech saliva, which contains assorted proteins and enzymes with anti-coagulative and vasodilative properties; these proteins prevent the formation of blood clots, ensure constant blood ooze and guarantee the leech a hearty meal.

The now widely derided practice of “bloodletting,” the therapeutic release of blood to address a perceived imbalance in the body, has been employed by doctors for millennia, with the leech emerging as a vital instrument precisely due to its blood ingestion and persistent anticoagulation. Leech therapy has been depicted in both art and literature for centuries - a mural painting within an Egyptian tomb that dates from 1557 BC depicts a nurse delicately applying a leech to a patient’s forehead while detailed descriptions of leech therapy have been found in ancient Greek medical texts from 200 BC, as well as in Arabic, Persian, Chinese, and Sanskrit literature dating from the first century AD.(4)(5)The zenith of medical leech therapy, however, occurred during the 1800s, when Europeans went wild for the hermaphroditic worms, applying them willy-nilly in the treatment of countless maladies - obesity, seizures, blurry vision, or sore throats are just some of the varied complaints that called for the laying on of a leech.(4) The slimy creatures were deemed an “irreplaceable medical apparatus” by physicians in that era and the demand was so pressing that, in 1833, 42 million leeches were imported into France to keep up with the demand.(6) Some French leech dealers were forced to purchase old horses, enclosing them within ponds as leech bait to ensure sufficient supply. The finest specimens, however, were imported from Sweden and Hungary, carefully delivered in wooden boxes filled with clay and marshy peat. 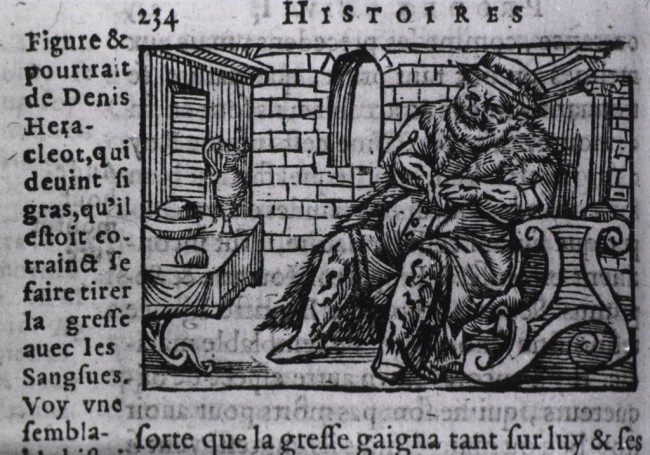 A French woodcut dating from 1598 depicting a gentleman covering himself in leeches in an attempt to lose weight. Image: Pierre Boaistuau, The National Library of Medicine. Click for source. Medical leech therapy declined in the late 1800s, to be improbably revived in the 1980s by plastic surgeons as part of an ingenious method of treating the problem of entrapped blood that surrounds implanted or reconstructed tissue, “venous flap congestion” in medical parlance.(2) In this treatment, leeches relieve congested, stagnant blood around implanted tissues, thereby preventing clotting and tissue necrosis and allowing for the growth of tiny precious capillaries into delicately healing tissue.(7) Leech therapy has improved the outcomes for re-implantation of amputated fingers, ears, and toes; for enhanced healing following breast reconstruction surgery; and for the survival of compromised grafted skin flaps. Indeed, it has been reported in the literature that leeches improve the success rates of these procedures by 60 to 80%.(8) Though leeches have promising applications in modern plastic surgery, their use can also cause a very rare infection of the skin and soft tissues due to a gut-dwelling stowaway. Like any insect or mammal, the leech’s digestive tract can harbor a variety of bacteria, including an aquatic bacteria known as Aeromonas that can also be commonly found in fresh, brackish or salt water in warm climates. Aeromonas is a vital component of the microflora of the leech gut, the symbiotic relationship between the two organisms relying on the bacteria producing nutrients and possibly protein-digesting enzymes and the leech providing oxygen-rich red blood cells. The presence of the bacteria, however, also increases the rare risk of infection during leech therapy. Infections with Aeromonas can occur 2 to 7 days after the beginning of leech therapy and can cause infected wounds of varying severity, ranging from minor pustules and abscesses to necrotizing fasciitis and sepsis. Case reports of Aeromonas infection after leech therapy are sporadic, but infection rates are estimated to range from 2.4% to 20% with an estimated 30% reduction in the rate of successful surgeries.(4)(8) A postoperative infection with Aeromonas can lead to amputations of previously implanted digits, necrosis of skin flaps, or systemic infection with sepsis and can require weeks of intravenous antibiotics. 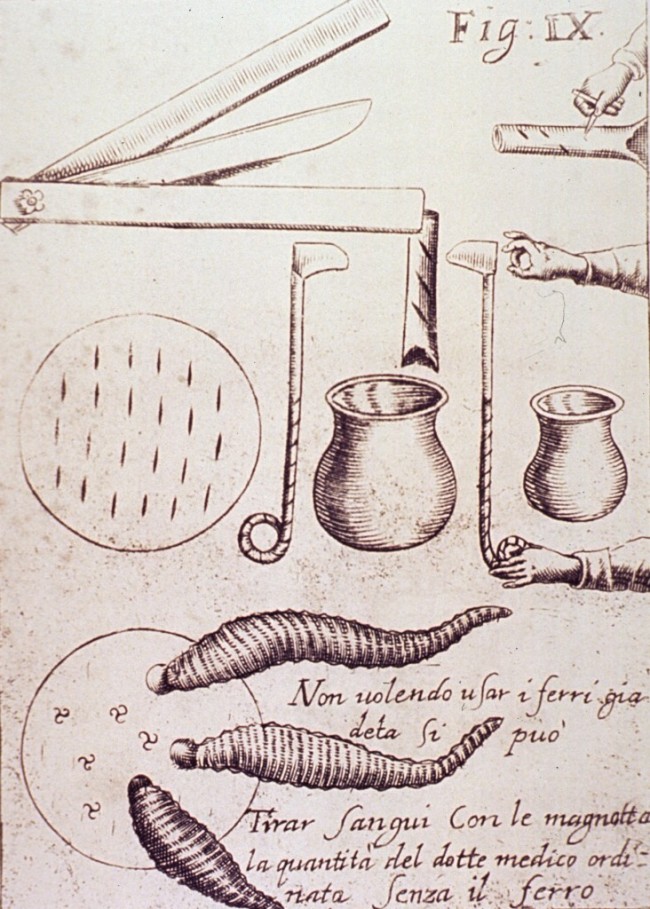 An Italian woodcut dating from 1671 that depicts the tools of the bloodletting trade, including a thumb lancet, fleam, collection cups, and, most prominently, leeches. The patterns to be used for bloodletting are featured in the mid-left circle, while in the lower left circle the distinctive leech bites are shown. Image: Cintio d'Amato, The National Library of Medicine. Click for source. Prophylactic treatment of the patient with appropriate antibiotics can sometimes preempt infection and even soaking the worms in antiseptic solution or liquid antibiotics has proven effective at reducing the infection risk.(4) Aeromonas infections have worse outcomes in parts of the body that have poor vascular supply, like the nose or fingers, but the difficulty, of course, is that leeches are specifically used to relieve congested blood in such areas of poor supply. As a result of this catch-22, leech therapy should not be used in people with medical conditions that prevent them from mounting a vigorous immune response, including those with liver problems, diabetes, blood disorders, and the immunocompromised.(7)It may seem surprising that the lowly leech continues to play an important role in medicine, thousands of years after its first applications among ancient physicians. Modern use of this ugly, slippery blood-sucker may seem especially at odds with the practice of plastic surgery, a form of medicine designed to improve form and function. However, the leech continues to wiggle its way into the practice of medicine, serving once again as an unlikely tool of the practicing physician.References 1) Munshi Y et al. (2008) Leeching in the history--a review. Pak J Biol Sci. 11(13): 1650-3 2) JM Hyson. (2005) Leech therapy: a history. J Hist Dent. 53(1): 25-7 3) MC Nelson& J Graf. (2012) Bacterial symbioses of the medicinal leech Hirudo verbana.Gut Microbes3:4: 322-331 4) B Maetz B et al. (2012) Infections following the application of leeches: two case reports and review of the literature. J Med Case Rep. 6: 364 5) D Isaacs. (2014) The much maligned leech.  J Paediatr Child Health.50(9): 661-2 6) WS Fields. (1991) The history of leeching and hirudin. Haemostasis. 21(1): 3-10 7) DP Snower et al. (1989) Aeromonas hydrophila Infection Associated with the Use of Medicinal Leeches. J Clin Microbiol.27(6): 1421-2 8) C Sartor et al. (2002) Nosocomial Infections with Aeromonas hydrophila from Leeches. Clin Infect Dis.35(1): e1–5