The Fluke That Thwarted an Invasion

Microbes are the omnipresent yet frequently unacknowledged adversary on the battlefield. Though microscopic in size, their very macroscopic effects can decimate armies, foil the best planned war initiatives, and change the course of history. In one of the greatest military debacles in history, Napoleon’s invasion of Russia in 1812 failed on account of body lice and typhus, the bacterium they transmit. Of the 600,000 soldiers in his Grande Armée, a mere ten thousand escaped with their lives. During the American Civil War, the Confederates were hamstrung by hookworms leaching their soldiers of blood. The course of World War I was swayed by the hundreds of thousands of cases of Spanish flu that required the diversion of precious resources and manpower on the part of both the Allied and Central Powers. These were not conflicts won on slender technicalities, but failed efforts against insurmountable logistical dilemmas caused by organisms imperceptible to the human eye. Infectious diseases have also been known to inadvertently offer protection to besieged populations. A prime example of this phenomenon can be found in the closing acts of the Chinese Civil War, when, in 1949, Taiwan was spared a crushing invasion in by the Chinese Communist Party due to the unanticipated effects of one slinky worm, the blood fluke Schistosoma japonicum.

A Scanning electron micrograph of a pair of coupling Schistosoma parasites. Image: Davies Laboratory Uniformed Services University Bethesda, MD. The atmosphere in east Asia following the end of World War II was one of simmering instability, of realigning geopolitical interests. The Japanese were cleaning up the wreckage of their cities and of their empire while General Douglas MacArthur and his American troops established a new imperial hold. Japan’s devastating defeat not only left a power vacuum in the region but also changed the geopolitical landscape as its colonies and possessions, including such key territories as Korea and Taiwan, were liberated and Manchuria was lost to the Soviets and Chinese. The island of Taiwan, then known as Formosa, was ceded to Chinese authorities prior to what would soon erupt into a period of intense political turmoil (1). The two-decade long Chinese Civil War had been on pause during WWII but resumed, in spite of previously established military truces, with skirmishes between the Nationalists, led by General Chiang Kai-shek, and the Communists, with Mao Zedong at their helm, proceeding anew (2). However, the Communists quickly established control throughout China and the Nationalists were forced to make a dangerous retreat across the hundred-odd mile wide strait to China’s newly won holding, Taiwan. In that summer of 1949, the Communists began preparing the People’s Liberation Army for an invasion of the island, moving tens of thousands of troops to the southern mainland, eager to finally eradicate the Nationalists. The attack on Taiwan would, of course, be an amphibious assault, but the island’s lack of ports presented a slight logistical obstacle to the immense task of landing an army’s worth of troops. The solution? Soldiers would board wooden junks, cross the strait, and then, the island within view, fling their bodies into the ocean and swim the short distance to the shores of Taiwan (3). The Communists immediately commenced swimming lessons for their landlubber troops, using streams and irrigation canals throughout the southeast provinces of Chekiang and Fukien as their training grounds (4). There was only one problem: unbeknownst to the P.L.A., they had begun training deep in the territory of an unknown enemy, as those aquatic sites had already been laid claim to by a dreary looking species of snail and its parasite, Schistosoma japonicum. Schistosomiasis is one of the great neglected tropical diseases. It is caused by a rarely heard of parasitic worm that affects 240 million people in over 70 countries worldwide. It rivals malaria as the most common parasitic infection of humans. This flat thin worm has a life cycle that relies on cycling through tropical freshwater snails, using the mollusks as intermediate vessels to mature and eventually spawn free-swimming larvae that will go on to infect humans. There are three major species of this worm that cause disease in humans, infecting the veins that drain the abdominal and pelvic visceral organs. It is this vampiric predilection for living in blood vessels that the species of Schistosoma are referred to as “blood flukes.” Schistosoma japonicum, found throughout China, Japan, the Philippines, and Indochina, prefers to infect the veins that drain nutrient-rich blood from the intestines and deliver it to the liver. The adult worms release their eggs, lodging in blood vessels and organs and provoking an immune response that includes intense inflammation and scarring. An acute infection results in severe flu-like symptoms including fever, chills, abdominal pain, and diarrhea. Long-term complications caused by this species can be serious, consisting of severe intestinal and liver scarring, leading to profound hypertension that results in bowel obstruction, malfunctioning liver, vomiting of blood, and death (5). Schistosoma japonicum reaches the organs of the body through an anatomical shortcut, bypassing the traditional infectious routes of oral ingestion or a breathy intake of infectious particles. The parasite’s larvae, found in rivers and dams, penetrate the skin of hapless humans fishing, bathing, laundering, or swimming in water. Infected humans go on to spread the infection by defecating or urinating into the same freshwater sources, preserving the parasite’s life cycle. 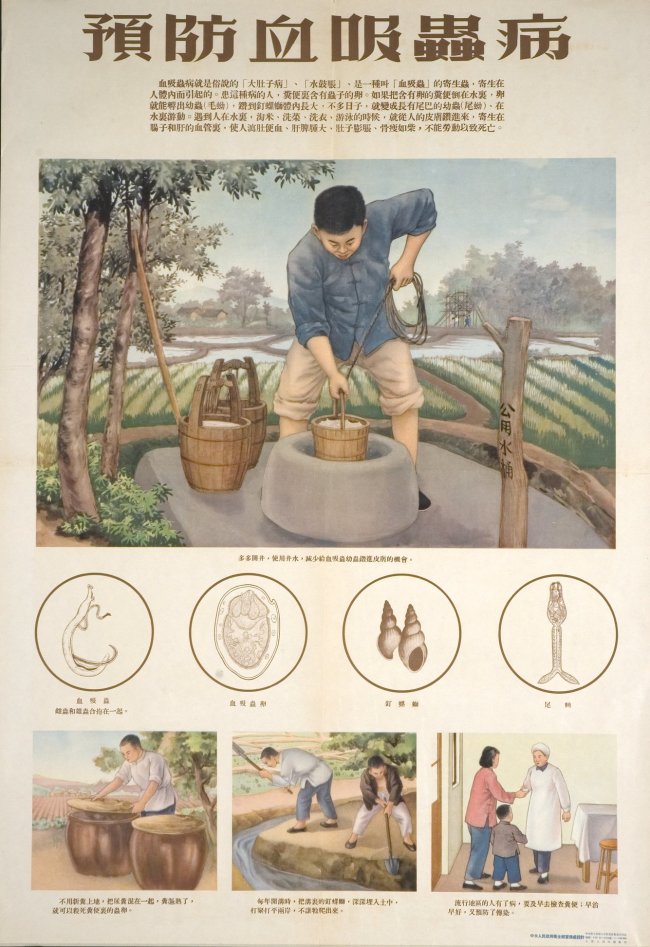 A Chinese public health poster on schistosomiasis prevention & control, possibly dated from 1954. Following the massive epidemic of S. japonicum among tens of thousands of soldiers, Mao began several public health campaigns against infectious disease nuisances. Image: U.S. National Library of Medicine. S. japonicum has a long history in China and is documented in reports more than two millennia old as a “water poison disease in streams contracted easily in spring and autumn ... [caused by] minute and invisible sand lice that penetrate human skin when [a] man is bathing in streams”(6). At the end of the WWII, an estimated ten million people were infected with schistosomiasis in mainland China (7). But in 1949, as the Communists were on the verge of absolutely annihilating General Chiang Kai-shek and his Nationalists, this hidden enemy struck, this “unknown unknown” laying in wait among the stream-dwelling snails of southeast China. Just a few weeks following the initiation of swimming exercises, soldiers began falling ill with skin rashes, fever, and severe cramping. Military training grew increasingly inefficient as more and more men sought medical treatment. Army barracks were transformed into wards for the ill, however physicians were stumped by the odd constellation of symptoms (8). It would be two more months before the order to halt swimming lessons in the People’s Liberation Army would come through. By then, the world’s largest acute epidemic of schistosomiasis, infecting between thirty to fifty thousand soldiers, was already well in effect. It would be another six months before the troops of the Chinese army would regain their strength and, by then, US warships had entered the China Straits (6). There would be no invasion. The opportunity to destroy the Nationalists had been lost. The geopolitical landscape of east Asia changed dramatically following the end of World War II and there are several identifiable actors and events that we can point to that definitively shaped the region’s trajectory. But the blood fluke Schistosoma japonicum is a rarely acknowledged participant of that tumultuous period in both China and Taiwan’s political history. Once an “obscure nuisance” concealed in the swamps and dams of China, S. japonicum found itself at the climax of hostilities between two warring factions (3). An actual fluke, and one of epidemiology, geography, and history, prevented an invasion and spared Taiwan. To this day, two de facto states exist, the People's Republic of China (PRC) in mainland China and Taiwan’s Republic of China (ROC), thanks to a worm. Resources Following this epic public health disaster, Mao revolutionized the practice of health and medicine in China. Check out: Paved With Good Intentions: Mao Tse-Tung’s “Four Pests” Disaster. Disease continues to influence war today. American soldiers fighting in Iraq and Afghanistan have been bedeviled by ulcerating sores caused by the leishmania parasite, injected into tissue by the bite of a sandfly. The African species of schistosomiasis is making way into China due to “the sharp growth in the China-aided projects in Africa and labor services export to Africa" Free to read at Pubmed here. References 1) B Hofkin (2010) Living in a Microbial World. New York, NY: Garland Science. 2) RL Worden et al. (1987) China: A Country Study. Washington, D.C.: Federal Research Division of the Library of Congress 3) FA Kierman (1959) The blood fluke that saved Formosa. Harper's Magazine. 45-47 4) AS Whiting (1968) China Crosses the Yalu: The Decision to Enter the Korean War. Stanford, CA: Stanford University Press 5) I Bica et al. (2000) Hepatic schistosomiasis. Infectious Disease Clinics of North America. 14(3): 583-604 6) CS Berry-Cabán (2007) Return of the God of Plague: Schistosomiasis in China. Journal of Rural & Tropical Public Health. 6: 45-53 7) NW Chunjuan (editor) (2013) Mr. Science & Chairman Mao's Cultural Revolution: Science and Technology in Modern China. Lanham, MD: Rowman & Littlefield 8) MD Gross (2010) Chasing snails: Anti-schistosomiasis campaigns in the People's Republic of China (Doctoral dissertation). Retrieved from eScholarship, University of California. Accessible at https://escholarship.org/uc/item/9kw3b0vc