Weight gain and changes within the brain can disrupt our precious shut-eye as we get older, but there are ways to mitigate these changes. 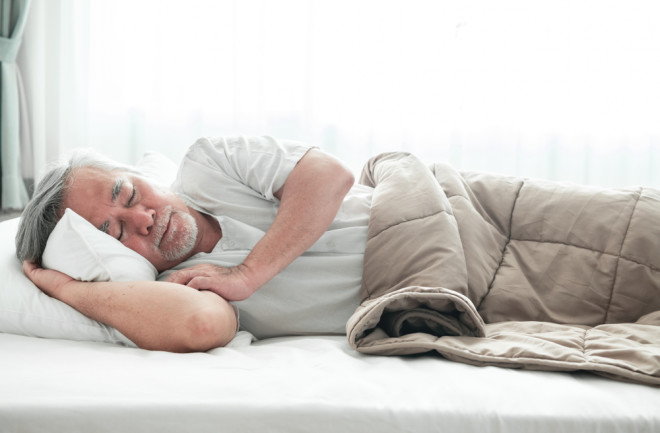 As we get older our list of responsibilities tends to grow: career obligations; kids and elderly parents to care for; not to mention bills to pay. Such worries can feel heavy, especially in the middle of the night when all you want to do is get some shut-eye. But stress is just one factor that can contribute to decreased sleep quality as we age.

Sleep and the Brain

Neurologist and sleep medicine physician Jeffrey Durmer says that although we still require eight to nine hours of shut-eye per night throughout adulthood, older adults tend to get less for a number of reasons — including how our internal clocks, which are regulated by the brain, shift over the decades of one’s life. “Circadian rhythms may modulate and change as we age so we go to bed too early and wake up too early,” he says.

One possible explanation behind this shift: By middle age, many people are more likely to spend most time indoors and therefore miss out on enough natural light needed to keep our circadian rhythms in check. And exercise, especially when performed outdoors, drives our non-REM deep sleep at night. So when we don’t get enough of it as we age, he says, our sleep quality may suffer as a result.

Another way the brain can cut down on our precious eight hours: During the day it collects adenosine, a nucleic acid that’s found in the cells of the body. Adenosine triggers our sleep systems at night and is reabsorbed after a good night’s sleep. Studies of older adults suggest that they have fewer adenosine receptors, and as a result they don’t have as much of a drive for sleep or for wake. “They seem to become less sensitive to adenosine,” Durmer says.

The Impacts of Weight Gain

Another joy of aging: watching the number on the scale tick up. Weight gain can significantly impact sleep, Durmer says. Extra fat cells create hormones in the body that make us sleepy during the day and encourage rest, which makes getting to bed at night more difficult.

Obese people are also more likely to experience sleep apnea due to the extra pressure on the neck and soft tissue that’s meant to keep the airway open during sleep. While you may be in bed for eight hours, sleep apnea can prevent deeper sleep that helps you feel well-rested the next day. “The muscles of the airway are collapsing and waking your brain up even if you might not realize it,” he says.

Research has also shown that diseases associated with obesity, such as high blood pressure and diabetes, are also linked to sleep disorders like insomnia and restless leg syndrome. Medications used to treat chronic diseases can also come with significant side effects; for example, beta-blockers prescribed for high blood pressure may also reduce the production of melatonin in the body. And selective serotonin reuptake inhibitors (SSRIs) taken for depression and anxiety can interfere with your ability to grow drowsy at night while also increasing your risk of restless leg syndrome.

Getting Back to Deep Sleep

But we don’t necessarily need to leave good sleep behind as we age. It’s important to make sure any of your medications that could disrupt sleep are taken in the morning, says Rachel Salas, assistant medical director at Johns Hopkins Center for Sleep and Wellness. Staving off alcohol use in the evenings can be helpful. While at first booze acts as a depressant that helps you go to sleep, it causes people to wake up in the middle of the night or early morning once it is metabolized by the liver.

Taking melatonin can also be helpful. She says that it’s often used in her sleep lab — not as a sleeping pill, but to help anchor one’s circadian rhythms. “Nowadays with LED nights, and screens at night we’re constantly sending messages to our brains that it’s still daytime,” she says. “And since it’s the brain that secretes melatonin, adding in a little more can help remind you that it’s bedtime.”

Routine is also important. Our brains need the structure and consistency that comes with going to sleep and waking up at the same time every day. Pairing this with a positive sleep environment can change your sleep game, Salas says. Try to keep your bedroom uncluttered and cold. Research has shown that the ideal temperature for sleep is between 67 and 70 degrees Fahrenheit. Clean sheets can also make a major difference. Washing them more often helps because skin cells and other body gunk can block airflow in your sheets and may make it more difficult to keep an ideal body temperature.

And finally, keep things simple. “You want your bedroom to look like a hotel room with no clutter or any types of cues that will remind your brain of things you need to do,” she says.

In general, it’s important to reflect on the sleep you’re getting, Salas says. If you’re sleeping enough hours at night and still feel like you're dragging, talk to your doctor to see whether something else is going on. “It’s really about making sleep a priority no matter what’s happening in your life."