Changes in human diet driven by cultural evolution seem to be at the root of many relatively recently emerged patterns of genetic variation. In particular, lactase persistence and varied production of amylase are two well known cases. Both of these new evolutionary genetic developments are responses to the shift toward carbohydrates over the last 10,000 years as mainstays of caloric intake. Rice and wheat serve as the foundations of much of human civilization. It is notable that both China and India are divided into rice and wheat (or millet) belts, so essential are modes of agriculture in our categorizations of societies. Even nomad societies are dependent on carbohydrates in the form of "simple sugars," as much of the nutritive value of milk is from its lactose sugar. Carbohydrates are convenient because they can be grown and controlled by humans, but also because they can be stored, and finally, reprocessed. Some of that reprocessing is straightforward, such as with breads, but for this post alcohol is what we are concerned with. Tom Standage's A History of the World in 6 Glasses documents the importance of beer & wine in ancient human societies (and hard liquor in modern ones), and also argues from both empirics and theory that fermented beverages are almost an inevitability in an agricultural society. Alcohol is rich in energy, portable, keeps, and, has a far lower pathogenic load than water in a pre-modern environment. Not to mention the pleasant "buzz" it provides. But like milk, those "without tolerance" often suffer negative physiological consequences. It turns out that like LCT, the locus critical in controlling the levels of the enzyme lactase, the alcohol metabolization loci exhibit variation across populations. A new paper is out which argues for the causal connection between the spread of rice agriculture, and a derived variant of ADH1B, The ADH1B Arg47His polymorphism in East Asian populations and expansion of rice domestication in history:

Here's a figure which shows the relationship between the spread of rice agriculture and the frequency of the derived ADH1B variant, which metabolizes alcohol much more efficaciously: 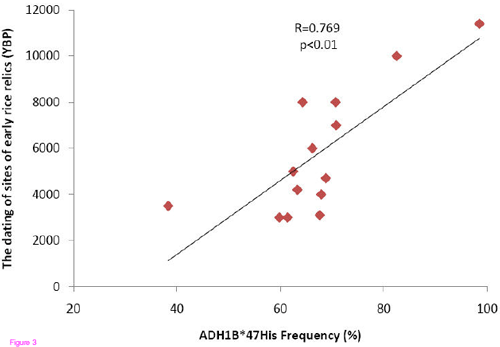 The plot here suggests the 50% of the variance of the spread of rice agriculture can be explained by the variance of the high activity associated allele. Fair enough, though one assumes that the causal direction here is inverted. Unless of course the spread of rice agriculture was concomitant with population replacement, as opposed to the spread of the allele itself. Additionally, I can't but help wonder what would happen to the correlation if you took the three outlier data out of the picture. Not sure if this is really that robust of a finding. Here's a map which shows the variation of the allele which confers higher activity: 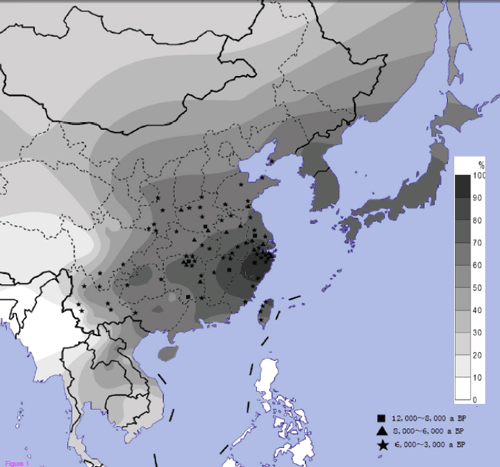 The map is generated from data you can find in the paper for various Han groups (by province) and ethnic groups in an around China (mostly the south and western fringe). The pattern is roughly that the core of China's rice-bowl seems to be the epicenter of the modal frequency of this allele. The visualization of the data smooths out the rough edges a bit to be sure, one should look at the original data. Finally, the authors examined more closely the genetic variation around ADH1B, and adduced whether there was evidence for natural selection around the derived variant, and when that variant may have emerged. The core haplotype around ADH1B tested positively for several methods based on patterns of linkage disequilibrium. They suggest a recent rapid rise in allele frequency for the core haplotype in question. That being said, eyeballing the list of ethnic groups and allele frequencies I'm not totally sure that this is necessarily local adaptation. Might it be some sort of demic diffusion, whereby Han rice-farmers underwent a massive demographic expansion? What I'd like to see are comparisons of genetic distance along with the allele frequencies, and note if deviations from any correspondences match-up with appropriate local ecology. In plain English, a genetically distant non-Han group which practices rice agriculture has a high frequency of derived ADH1B, and a Han group which does not has a low frequency of ADH1B. This would suggest that what we're seeing here is selection acting upon a locus, and not demographic history. There was also an attempt to determine approximately when the selection event which led to the rise in frequency of ADH1B occurred. I'm not totally persuaded by the arguments in this section of the paper, but they come to the satisfying (for them) position that it corresponds with the spread of rice agriculture in chronology. Over the past few years I have become more open to the idea that alcohol metabolism may be a significant force for adaptation in humans over the past 10,000 years. This may correlate rather suspiciously with the fact that I've started drinking a bit more regularly...but in any case, it does happen to be the case in many pre-modern societies alcohol consumption was very widespread. In societies where nutritional stress was common it was a major source of calories, and as I note above its advantage in terms of low pathogen load vis-a-vis water was probably a major factor in its healthful effects (many ancient societies mixed water and wine freely). Not only does alcohol provide energy, but its psychological boost is obvious when it comes to the grinding life of a farmer. Rum rations was one of the major factors which allowed Caribbean slavery to be as economically profitable as it was, its existence made the short and brutal lives of human chattel more tolerable. The attraction of people who had little experience with alcohol, in particular its more potent varieties, to the substance seems a clear signal that once discovered it would inevitably exhibit a magnetic appeal. In this case the bias in favor of those who were more metabolically suited toward processing the new source of calories with the least deleterious consequences would have a great fitness consequence. What I don't understand in the context of this paper is why rice was so critical in China. Is production of alcohol from the non-rice crops of the Yellow River plain that difficult vis-a-vis rice? (i.e., are there economic reasons which result in relatively ease of production of alcohol from rice?) Millet was cultivated at the same time as rice. I assume that plotting the frequency of derived ADH1B against the introduction of millet produces a less publishable R-squared. Citation: BMC Evolutionary Biology 2010, 10:15doi:10.1186/1471-2148-10-15