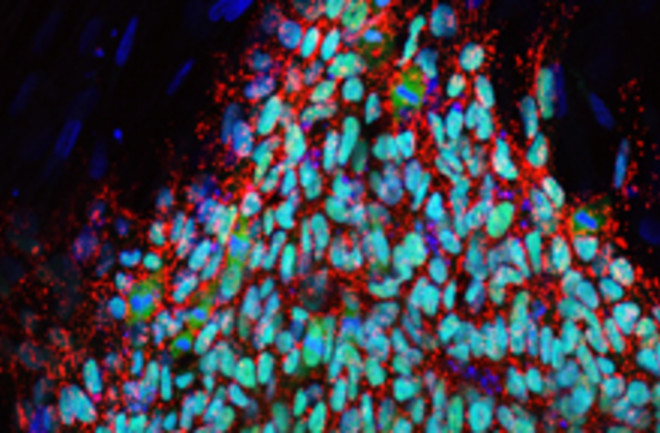 Scientists have taken another step in cellular reprogramming that points the way towards the use of a patient's own cells to treat genetic diseases. In a proof of concept study, researchers took skin cells from

In the skin cells, the researchers fixed the genetic defects that caused the disease, and then reprogrammed the cells to act like stem cells capable of growing into any type of tissue.

The corrected stem cells could be grown into blood precursor cells for therapy. As these would carry a patient’s own DNA, except for the mutation responsible for the illness, they could be transplanted without risk of rejection by the body’s immune system [Times Online].

However, the patched up cells were not used to treat patients in this study, because it isn't yet clear whether such cells are safe. Comments molecular geneticist Chris Mathew:

"In future it may become possible to transfer the corrected stem cells back into the patient, but much work remains to be done before this can be transferred from the lab bench to the bedside" [The Scientist].

Over the past year, such reprogrammed and multipurpose cells known as

induced pluripotent stem (iPS) cells have been generated from patients with a wide variety of genetic disorders.... Such disease-specific stem cells offer unprecedented experimental models to investigate disease mechanisms and to screen new drug compounds. But to treat diseases with tailor-made cell therapies, such stem cells first need to be corrected to be disease-free [The Scientist].

In the new study, published in Nature, lead researcher Juan Carlos Izpisua Belmonte and his colleagues first used a lentivirus to deliver genes to the skin cells, which corrected the mutation that caused Fanconi anemia in the three patients. The team then tranformed the skin cells into iPS cells by using retroviruses to introduce four genes known to be active in embryo development, which in effect turned back the clock and made the adult skin cells behave like embryonic stem cells. The technique isn't ready for medical trials, researchers stress.

"Serious concerns need addressing before attempting any clinical trial with iPS-derived cells; perhaps the most important is that of tumor formation," says Belmonte. This is because the virally delivered genes used to reprogram the skin cells can remain embedded in the cell's DNA even after reprogramming. These genes are thought to become active during the cell-differentiation process, considerably raising the long-term risk of cancer [Technology Review].

However, just last week another group of researchers announced a new way to reprogram skin cells that doesn't involve the use of viruses, raising hopes that scientists will find ways to use patients' own cells to fight their diseases. Related Content: 80beats: A Safer Way to Transform Skin Cells Into Stem Cells Brings Medical Trials Closer 80beats: One Step Closer to Embryo-Free (and Controversy-Free) Stem Cells 80beats: Researchers Create Stem Cells Without Cancerous Side EffectsImage: Juan Carlos Izpisua Belmonte. A colony of the iPS cells created.

More From Discover
The Sciences
Why Human Foreskin Is a Hot Commodity in Science
Health
Could This Millennia-Old Remedy Become a Pharmaceutical Marvel?
Health
Menthol Cigarettes Are Getting Banned — Here's Why
Health
This Rare Genetic Condition Leads to Cancer After Cancer
Health
Why Is It So Hard to Find a Cure for Cancer?
Health
How At-Home Colorectal Cancer Screening Tests Compare to Colonoscopies
Recommendations From Our Store
My Science ShopCosmos: Possible Worlds
My Science ShopStrange Science
My Science ShopEinstein's Universe
My Science ShopElements Flashcards
Shop Now
Stay Curious
Join
Our List