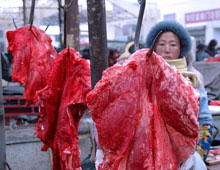 Eating red meat could make your body more vulnerable to a dangerous bacterial toxin, according to a new study. A sugar molecule, Neu5Gc, found in beef, lamb, pork, and unpasteurized milk can attach itself to the cells lining the human intestines and act as a magnet for toxins produced by certain strains of E. coli, often carried in the same meats. The result is bloody diarrhea and sometimes death.

"This uncovered the first example of bacterium causing disease in humans by targeting a molecule which is incorporated into our bodies through what we eat," [ABC Science]

The scientists tested human gut and kidney cells steeped in these sugar molecules and discovered that the toxin was about seven times more likely to bind to these cells if the sugar was present. It is still “not clear how to extrapolate this precisely to the human body,” [Science News]

says co-author Ajit Varki. That is, researchers don't know exactly what it means for human health yet.However, the researchers estimate that

people who eat red meat and dairy products will be about 10 times more susceptible to infection by this strain of E. coli than those who don't [New Scientist].

The average meat-eating American consumes about 10 to 20 milligrams of Neu5Gc per day; a typical quarter-pound hamburger contains about 3 milligrams of the sugar. Since the sugar is only dangerous in the presence of the bacterial toxin, cooking meat well enough to kill bacteria should largely eliminate the health risk. The bacterial toxin, subtilase cytotoxin, is thought to have originally evolved to attack cattle and other animals that produce Neu5Gc naturally. For these animals, the consequences of the toxin are less severe because the Neu5Gc in their blood serum prevent the toxin from accumulating at the cells of the gut. However, humans long ago lost the ability to produce Neu5Gc and are only exposed to it through the food that enters their intestines.

To demonstrate that humans could add the sugar to their own cells, Varki consumed some pure [Neu5Gc]. "It showed up in my urine and got incorporated into my facial hair," he says. "I stopped eating red meat after that" [New Scientist].