Today in The New York Timescoverage of a report published yesterday on a Saudi hospital-borne outbreak of Middle East respiratory syndrome released by The New England Journal of Medicine, a potential epidemiological phenomenon was briefly addressed: men have made up the majority of infected cases and the low rates of infection among women may be due to an emphasis on the wearing of the face veil, known as the “niqab,” in Arab culture. An international team investigated the epidemiological characteristics of an outbreak of Middle East respiratory syndrome (MERS) among four hospitals in eastern Saudi Arabia that occurred between April 1 to May 23, 2013. Of the 64 cases of MERS since April 2012, the majority have stemmed from Saudi Arabia and identifying the characteristics of disease transmission is of chief concern in controlling further spread of the outbreak. All of the cases thus far have originated within the Middle East, from Jordan, Qatar, Saudi Arabia, Jordan and the United Arab Emirates; beyond the Middle East, the virus has found its way to Britain, France, Italy and Tunisia via traveling tourists, businessmen and healthcare workers.

An electron microscopy image of particles of the coronavirus that causes Middle East Respiratory Syndrome (MERS-CoV). Virions contain characteristic club-like projections emanating from the viral membrane. Image: Cynthia Goldsmith/Maureen Metcalfe/Azaibi Tamin, CDC.gov. Though the authors of the The New England Journal of Medicine (NEJM) report do not address the asymmetrically gendered pattern of disease - 74% of cases occurred in men in this particular outbreak - the mention of the protective effect of the niqab by The New York Times (NYT) piqued my interest. Saudi Arabia has some of the most stringent interpretations of Islamic laws governing the dress and behavior of its citizens and the covering of the mouth and nose by the niqab may have decreased the likelihood of airborne transmission of the respiratory-borne disease. I suspect that the wearing the niqab may also decrease the amount of contact between contaminated fingers and the mucosal membranes of the face. Additionally, the prohibition of casual contact between unrelated sexes and the social seclusion of women through the enforcement of purdah may have resulted in an asymmetrical transmission effect, in which only men were exposed and women were unintentionally "barred" from exposure. This Saudi outbreak consisted of 23 cases, with 21 cases appearing to directly involve person-to-person transmission in specifically healthcare-related environments. In the supplementary material accompanying the report, the transmission events that led to these 23 cases, with six women infected, is displayed on a dense timeline with patients labeled alphabetically A through W depending upon onset of symptoms during the two-month interval. One woman, deemed patient H, was infected during a dialysis treatment session from male patient C, who infected six other male patients early on in the outbreak. Two women, patients N and U, were infected a month into the outbreak from that female patient H while convalescing in the same hospital ward. Female patient P was infected during a dialysis session from another male patient F. Female patient R, a dialysis nurse, may have been infected at any point while caring for any number of infected patients. Lastly, female patient Y appears to have been infected from male patient X, who was convalescing two rooms away in the same hospital. 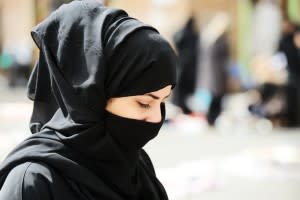 A young Arabic Muslim woman wearing the hijab scarf and the niqab veil. Image: Zurijeta via Shutterstock.com. In this outbreak, 50% of female cases were infected by other women within their gendered wards. But understanding the nature of transmission between the other women brings up intriguing questions left unanswered by yesterday's NEJM report. Were the dialysis centers gender-stratified? What about within the hospital? Were infected woman convalescing in hospital wards wearing their niqabs and the abaya robe that cover the length of their body, which may have reduced their exposure to MERS within the hospital environment?Was it the case that the niqab protected women from infection or because they have inflexible, highly structured and segregated relations with men which negated any possibility of exposure? Knowing more about the nature of the interactions between these unrelated cases would yield valuable insight into the dynamics of this disease within a highly religious country and about its potential for spread outside the Middle East. Interestingly, in a 2001 study on the effect of the niqab veil on incidence of respiratory disease in Saudi women, researchers unexpectedly found that bronchial asthma and the common cold “were significantly more common in veils users;” wearing the veil may have contributed to dense, wet spots close to the mouth and nose which could faciliate the growth of organisms that lead to infection (1). Further research into how the niqab may enhance or lessen the risk of airborne transmission would yield interesting insights into how respiratory diseases affect Arab cultures. 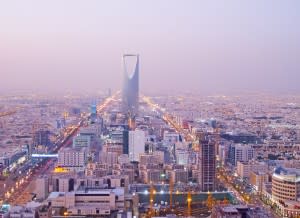 A major landmark, the Kingdom tower, in Riyadh, Saudi Arabia. The April-May outbreak of Middle Eastern Respiratory Syndrome (MERS) took place just east of Riyadh. Image: Fedor Selivanov via Shutterstock.com There may be other variables at play here too. An asymmetrical pattern of MERS infection in women may be a result of gendered access to healthcare: Are Arab women less likely to be admitted to hospitals or be permitted to seek medical care? This certainly plays a role in this outbreak as it is well known that gender inequality is a major determinant affecting healthcare access, correct diagnoses and treatments (2). Or is it a matter of social status and ability to find work in the Saudi Kingdom? Are women less likely to be working in hospitals? I suspect so. This NEJM report on a MERS outbreak in Saudi Arabia offers a striking and fascinating insight into how religion and culture mediate our response to infectious diseases, whether enhancing or diminishing our susceptibility to infection. Right now in the Middle East, the widespread usage of the niqab and the enforcement of purdah - the segregation of sexes - may be inadvertently emphasizing a crucial aspect of infection control: contact precautions and containment. Perhaps we should view wearing the hijab, niqab and burkas as offering an unusual form of protection from biological hazards? Resources Previously on this blog: following the completion of the pilgrimage or Hajj to Mecca, exiting the spiritual state of purity called Ihram may put millions of Muslims at risk of bloodborne diseases through the use of communal razors. At Wiki Islam, an interesting article “The Health Effects of Islamic Dress" for women who observe the wearing of the hijab. Religious decrees may or may not protect you against disease. In the '90s, members of the Orthodox Jewish community found themselves infected with a pig tapworm parasite in spite of their strict rules regarding pork consumption. References 1) EFEM Ahmad et al. (2001) The Effect of Wearing the Veil by Saudi Ladies on the Occurrence of Respiratory Diseases. J Asthma.38(5): 423-426 2) H Bashour & F. Mamaree. (2003) Gender differences and tuberculosis in the Syrian Arab Republic: patients’ attitudes, compliance and outcomes. East Mediterr Health J. 9(4): 757-68