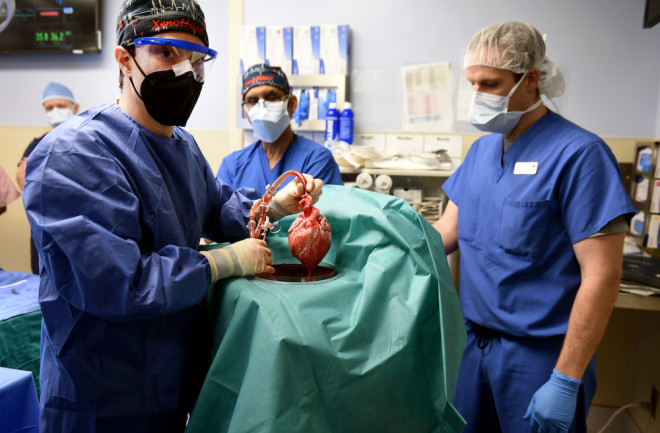 Desperately ill and seeking a miracle, David Bennett Sr. took a last-ditch gamble on Jan. 7, when he became the first human to be successfully transplanted with the heart of a pig. “It creates the pulse, it creates the pressure, it is his heart,” declared Bartley Griffith, director of the surgical team that performed the operation at the University of Maryland Medical Center. “We are thrilled, but we don’t know what tomorrow will bring us.”

Bennett, 57, held on through 60 tomorrows, far longer than any previous patient who’d received a heart from another species. His remarkable run offered new hope that such procedures, known as xenotransplantation, could help relieve the perpetual shortage of donor organs, saving thousands of lives each year. (On average, 17 people die every day in the U.S. while waiting for a transplant.) First, though, experts will have to figure out what killed him.

The earliest attempts at xenotransplantation of organs, involving kidneys from rabbits, goats, and other animals, occurred in the early 20th century, decades before the first successful human-to-human transplants. Rejection, which occurs when the recipient’s immune system recognizes the donor organ as a foreign object and attacks it, followed within hours or days. Results improved after immunosuppressant drugs arrived in the 1960s, but most recipients still died after a few weeks. The record for a heart xenotransplant was set in 1983, when an infant named Baby Fae survived for 20 days with an organ from a baboon.

In recent years, however, advances in gene editing have opened a new possibility: modifying animals to provide user-friendly spare parts. Pigs could be ideal for this purpose, because they’re easy to raise and reach adult human size in months. Although there’s debate over the ethics of such organ farming, some biotech companies — including Revivicor, a subsidiary of Maryland-based United Therapeutics — are investing heavily in the prospect. So far, experimental transplants from pigs to baboons and pigs to brain-dead human patients have been promising.

The U.S. Food and Drug Administration granted “compassionate use” approval for Bennett’s xenotransplant on New Year’s Eve. The donor pig was bred by Revivicor from a line of animals in which 10 genes had been altered to improve the heart’s immunocompatibility and keep it from growing too big. Beyond that, the pig was reared in isolation and tested regularly for viruses that could infect humans or damage the organ itself.

David Bennett (right) snaps a photo with Bartley Griffith, the director of the surgical team that performed the procedure. (Credit: David Bennett Jr.)

Before the operation, Bennett suffered from cardiac failure so severe that he’d been on a heart-lung machine for over a month. His new heart functioned “even better than a human transplant,” says Muhammad Mohiuddin, scientific director of the University of Maryland’s cardiac xenotransplantation program. Although he required two more surgeries in the first 12 days to treat a damaged artery and a bowel infection, Bennett was soon able to start physical therapy and spend time with his family.

On day 20, however, a worrisome sign appeared: Blood tests showed DNA fragments from porcine cytomegalovirus (PCMV), a microbe that can harm pig organ transplants, though it’s not known to infect humans. The virus can remain latent in an animal’s cells, undetectable by most screening methods until it begins replicating.

At that point, the levels of PCMV were too low to require urgent action. But 43 days after the procedure, Bennett was struck by an infection of the lungs and airway. Although different pathogens were likely responsible for this problem, his PCMV counts were also rising. To fight off the invaders, the team administered a mix of antibodies known as intravenous immune globulin, or IVIG.

Bennett overcame the lung infection, but his health deteriorated suddenly on the 49th day, and an echocardiogram showed that his heart was failing. Then, biopsies revealed areas of dying tissue in that organ. Eleven days later, the team determined that the damage was irreversible and removed him from life support.

Initially, Griffith identified PCMV as the prime suspect in Bennett’s demise. Further analysis, however, muddied the waters. Although the heart was swollen and stiff, no signs of active infection were evident. Nor were any of the classic markers of immune rejection.

The University of Maryland team is investigating a range of potential culprits. Antibodies in the IVIG might have attacked the heart tissue. Some previously unknown form of rejection may have been at work. Or Bennett may simply have been too weak to withstand the stresses of the operation and its aftermath. “This individual was not in good physical shape going into transplant,” says Jay Fishman, associate director of the transplantation center at Massachusetts General Hospital.

It could take months to resolve the mystery. Meanwhile, researchers are working on improved screening methods for PCMV, and pondering new ways to control infection in xenotransplant patients. Still, experts regard Bennett’s case as a major step toward a future in which replacement organs are available on demand. “There’s a lot of learning that needs to be done,” says Mohiuddin. “But we have come a long way from the point where this looked impossible.”