On New Year’s Eve, 2,000 Dead Birds Rained Down on Arkansas 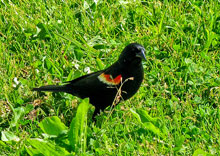 Like some kind of gruesome confetti, Mother Nature rained down more than 2,000 dead blackbirds on a half square mile of Arkansas on New Year's Eve. The birds fell over Beebe, Arkansas, but no one is sure what killed them. At around 11:30 p.m. the reports started coming in from residents of the central Arkansas town--worried citizens described the birds falling, dead, from the sky. The birds showed signs of physical trauma, Arkansas bird expert Karen Rowe told CNN Radio:

"It's important to understand that a sick bird can't fly. So whatever happened to these birds happened very quickly," Rowe told CNN Radio on Sunday. "Something must have caused these birds to flush out of the trees at night, where they're normally just roosting and staying in the treetops ... and then something got them out of the air and caused their death and then they fell to earth," Rowe added.

In the light of morning, the dead birds littered rooftops, streets, and lawns in the area. The birds were collected, and about 65 were sent for testing to see if researchers could determine the cause of death. Rowe speculates the trauma may have resulted from high-altitude hail, lightning, or even stress caused by fireworks. Workers finished collecting the birds mid-day Sunday. They seem to come from a local group of blackbirds, Beebe mayor Mike Robertson told Yahoo! News

Several hundred thousand red-winged blackbirds have used a wooded area in the town as a roost for the past several years, he said. Robertson and other officials went to the roost area over the weekend and found no dead birds on the ground. "That pretty much rules out an illness" or poisoning, the mayor said.

According to local news reports

, the Arkansas Department of Environmental Quality tested the air in the area and determined there were no toxins present. http://www.youtube.com/watch?v=ud_lqVSaSMY In an apparently unrelated incident, 100,000 dead drum fish washed ashore about 150 miles away from Beebe. Local experts told local NBC station KARK4

that the fish were most likely suffering from a disease:

"If it was from a pollutant, it would have affected all of the fish, not just drum fish," Keith Stephens of the Arkansas Game and Fish Commission said. The Arkansas Department of Health advised people not to eat any dead fish floating in the water for safety reasons.

Discoblog: How to Get Rid of Invasive Tree Snakes: Bomb Them With Parachuted, Poisonous Mice