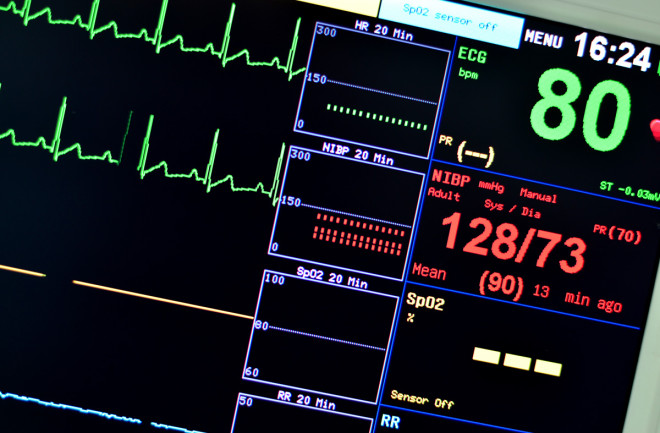 (Credit: toysf400/Shutterstock) If you've ever spent any time at a hospital, you know what it's like to be under constant supervision. Sensors and monitors keep track of your most basic bodily functions day and night, giving doctors and nurses to-the-second information on how you're doing. All that supervision comes with wires and sensors taped and stuck all over a patient's body, though, which is annoying and can throw off some readings. Now, two Cornell University researchers say they've devised a way to monitor vital signs that doesn't require skin contact. Their technique relies on small radio frequency identification (RFID) sensors, the same technology that's in key fobs, that can pick up heartbeats, chest movements and even blood pressures, and can keep track of multiple patients at once. The technology could be useful in hospitals where round-the-clock supervision is key.

The system, detailed in a paper published Monday in Nature Electronics, consists of a small RFID chip and an embroidered antenna that helps to pick up signals from inside the body. The sensors work by transmitting radio waves into the body and picking them back up after they bounce back to pass on to a monitoring station. Movement inside the body, say a heartbeat, or chest movements caused by breaths alter the radio waves in a specific way that can be picked up on. Crucially, chest and heart motions alter different aspects of the signal, which the researchers say makes it easy to tell them apart. Sensors placed near both the heart and the wrist offer a measure of redundancy, and also allow for an approximation of blood pressure by watching the time elapsed between heartbeats measured at each location.

A figure from the paper showing the RFID sensor and embroidered antenna. (Credit: Xiaonan Hui and Edwin C. Kan) The RFID sensors could simply be sewn into a patient's clothes wherever they're needed, and would be small and light enough to pass unnoticed. To see how their system would fare in the real world, the researchers put their fabric through the wash a few times — they report it still worked fine. A receiver could also keep an eye on more than one patient at once if they were each equipped with sensors. In all, the sensors can pick up on heart rate, respirations, blood pressure and breathing effort. Current ways of getting these readings, such as electrodes, ultrasound sensors, strain gauges and optical absorption sensors, all have drawbacks. Electrodes must go directly on the body, for example, ultrasound sensors are bulky, and strain gauges can be uncomfortable. RFID sensors, by contrast, are unobtrusive and don't require physical contact, making them much more comfortable. The materials required are also cheap and readily available, the researchers say, making this hand-off system easy to put in place.