Learning From the World’s Worst Diseases

We’ve made some important scientific progress by tackling puzzling, deadly outbreaks throughout history. But the social side of epidemiology is a whole different story. 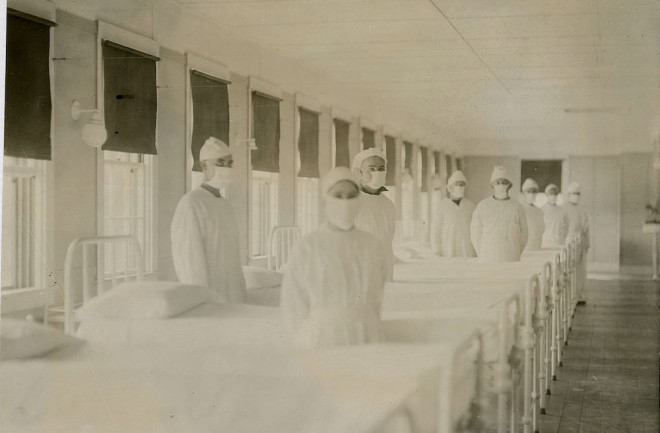 A 1918 photo of an influenza ward at the U.S. Naval Hospital on Mare Island, California. (Credit: Navy Medicine/Wikimedia Commons)

In 2019, internal medicine physician Lydia Kang teamed up with librarian and historian Nate Pedersen on a potential book. Two years later, their work PATIENT ZERO: A Curious History of the World’s Worst Diseases has arrived, investigating the precise origins of a laundry list of horrifying human ailments. These detailed chapters prove that epidemiological work is rarely cut and dry, a lesson we’re all a bit too familiar with today.

As Kang and Pedersen researched everything from grain-induced hallucinations in the Middle Ages to baffling mad cow outbreaks in the 1980s and the 2001 anthrax attacks, COVID-19 mysteriously emerged thousands of miles away in Wuhan. Discover spoke to the authors to learn how the current pandemic shaped their work — and whether we’ll ever learn from past missteps when tackling outbreaks:

Q: How did the emergence of COVID-19 influence your writing process? Did it reinforce any historical patterns related to the disease outbreaks you researched?

LK: Just when we were putting together the proposal and the chapters, we heard the first inklings that something was going on in China. Honestly, we were thinking it was going to be a side note — there are always these worries that come up and then get squashed. So, that was a little shocking.

The chapter on the 1918 influenza pandemic really struck home. There are many parallels between that pandemic and this one, with people fighting mask mandates and the quackery that was involved with people trying everything under the sun to try to take care of the disease. And as with every single pandemic, there was the whole question about the origin. A lot of our chapter on that influenza outbreak covers where it came from because if we can answer that question, it might help us figure out how to deal with other ones in the future.

NP: The timing was interesting with selling this book as we lived through, in our time anyway, the first thing like this that hit on a global scale. I think a lot of us have delegated pandemics to the historical record, like we’ve moved past them. It’s easy to think that, and it’s not at all the case. We've all been very visibly and horrifically reminded of that in the last year and a half.

Author Lydia Kang is a practicing internal medicine physician in Omaha, Nebraska. She has previously collaborated with Nate Pedersen on the 2017 book, Quackery: A Brief History of the Worst Ways to Cure Everything. (Credit: Workman Publishing)

Q: Did this book affect how you approach daily life, given the seemingly endless infectious disease possibilities?

NP: In a way, COVID-19 wasn’t that big of a deal having recently researched much worse diseases and pandemics. Not to undermine the seriousness of the pandemic and the amount of people that have lost their lives, or those whose health has been seriously negatively impacted. But we're still not talking about a death rate anywhere near some of the diseases that we've covered.

There's also an impressive resilience in the human species that was highlighted in the book: the ability to have resurfaced over and over again, throughout history, from much worse diseases than COVID.

Q: Why do you think people tend to resort to placing blame during outbreaks, particularly against marginalized groups?

LK: When we wrote this book and decided on the title, there was a lot of trepidation because we realized that it inherently sounds like it’s finger-pointing. We wanted to play a switcheroo on people: We point out that the patient zero concept, though it’s really important within epidemiology and trying to find origins to understand diseases, is a really flawed concept.

NP: The outbreak of a scary disease becomes a vessel for people to channel other societal imbalances into. It's tempting to channel that anger onto the marginalized other, or to whatever someone identifies as the source of that disease.

LK: With the bubonic plague hitting the shores of the United States at the turn of the last century, there was a huge amount of xenophobia around blaming Chinese Americans for basically bringing a scourge onto their land. There was a quarantine around San Francisco’s Chinatown, and even though they would let white people out they would keep the Chinese American people in this area. The racism and xenophobia that sprouted up around that original outbreak was shockingly relevant today. The slogan that the then-San Francisco mayor later used in a 1920 Senate campaign, ‘Keep California White,’ chilled me because I thought it sounded a little too familiar.

Q: Did any of the diseases you researched particularly interest or surprise you?

NP: One of the more surprising chapters was about rabies. I didn't know before researching this book how extraordinarily lethal the rabies virus is: Pre-vaccine, it was basically a death sentence. The virus is almost too good at killing because it reduces its chances of spreading. It has a lot of really unusual symptoms that I was surprised by, like a fear of water.

LK: A couple of the chapters were particularly difficult for me to write, including one on the so-called origins of HIV. There are so many articles to dig up about where it happened. Many other authors have done this and they’ve spent entire books doing it. I had to do it in one chapter.

And when I was in residency at Bellevue Hospital in New York City, one of the rotations that we always did was on the virology ward, which took care of almost exclusively HIV-positive patients. That was in the early '90s, and I was too young to have experienced all the stuff that was happening in the 1980s. I was in this place where we were starting to have medications to use, but patients were still horribly ill and it was still a death sentence.

I got stuck with a needle on one of my last rotations there and I remember thinking, am I going to have HIV? Am I going to go on medication? I felt that sort of panic of knowing the history and knowing that it's a death sentence and you can get it from like this teeny little prick of a needle.

We ended up pulling that out of the chapter, but that was a really strange exploration for me given the history that I have with taking care of patients with HIV. That was a roller-coaster ride for sure.

Q: Might new technologies like mRNA ‘plug-and-play’ vaccines put us in a better position than past generations for the next serious infectious disease? And what about the social aspects of epidemiology?

LK: The science part of it is getting better and better. With COVID, there were a couple of strange cases and deaths in Wuhan. They were able to get samples and the DNA sequence of the virus really quickly, within a couple of days of getting a sample.

And the development of testing and vaccines was extraordinarily fast. Everything that tripped it up was politics and money and international grandstanding. In a lot of ways, science stuff is easier and much more straightforward. It’s difficult to get people, in this day and age where individualism and freedom of thought and speech and choice mean so much, to do public health well. That's going to continue for probably every major epidemic or pandemic outbreak.

With data constantly forthcoming, there's this issue with people feeling very uncomfortable with moving needles. You get information that is supposedly not debatable, but the problem is that any time a study is done, all that data is debatable: how it's done; possible bias; who paid for it. There's a million different factors that go into whether or not that data is suspect.

LK: I think the issue is that people aren't patient, so there isn't often time to let things work themselves out. Then in that interim, where you have that uncertainty about data and science, that uncertainty is weaponized. It is probably one of the big things that scientists and people in health care have been fighting since the pandemic broke out: the weaponization of misinformation and taking that distrust or uncertainty of findings and running with it to a place where it becomes really frightening and dangerous. That’s not going to go away because of the nature of science.