The 1918 influenza pandemic spread through the U.S. in fatal surges, much like the COVID-19 pandemic that began a century later. 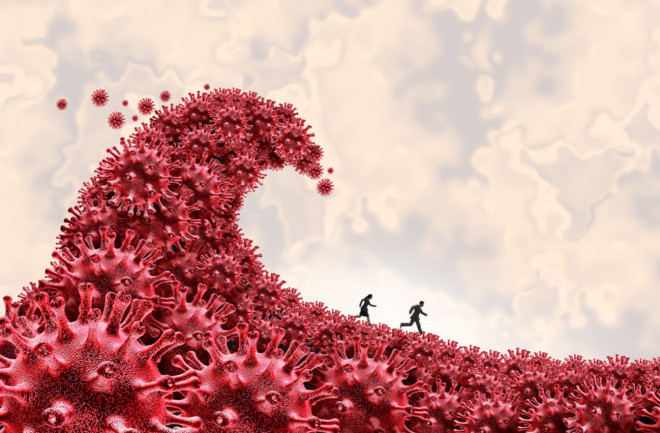 Avoid crowded places. Stay home if you feel sick. Wear a face mask when others come near. Such pandemic safety advice can be seen everywhere from television commercials to bus stops nowadays, but these messages originate from a Chicago Daily Tribune article published in October 1918. Readers were also warned that “promiscuous” coughing would not be tolerated.

At the time of the article’s publication, the United States was in the throes of a 1918 influenza surge that eventually went on to kill an estimated 675,000 Americans. Like our current one, medical historians say the 1918 pandemic weathered both lulls and spikes in infection rates. Experts may not agree on the number of waves each pandemic spawned, but they do agree that even during the lulls, neither virus ever fully went away.

Scientists began calling pandemic surges “waves” because they felt the virus receded and then quickly intensified, says Howard Markel, director of the Center for the History of Medicine at the University of Michigan. “The term ‘wave’ is a simply a metaphor that epidemiologists used between the 1920s and the 1930s to describe the 1918-1919 pandemic,” he says. “Depending on how you read that pandemic, there could be four waves.”

Some historians view the spring of 1918, when military men were sickened by an unknown respiratory infection, as the first wave of the pandemic in the U.S. Spanish newspapers began reporting a similar, mysterious respiratory infection in the summer. Despite its moniker of “Spanish flu,” the virus did not originate in Spain, says Jeremy Brown, director of the Office of Emergency Care Research at the National Institutes of Health. By autumn, the virus was aggressively infecting Americans of all ages. As many as 195,000 died in October 1918, according to the Centers for Disease Control and Prevention.

Scientists didn’t understand much about the virus during the 1918 pandemic. In fact, decades would pass before they identified it as the H1N1 strain. “They had no idea what was infecting them,” says Brown, author of Influenza: The Hundred-Year Hunt to Cure the 1918 Spanish Flu Pandemic.

Public health officials, however, sensed the need for closing public spaces until the threat passed. Brown says the infection rates dropped as a result, but then returned in early winter of 1919 in what was considered the third wave. Select places such as Detroit, St. Louis and Minneapolis also saw a fourth wave at the end of 1919 that lasted until early 1920. “By the time you were done, it was basically a year with a lull in the summer,” Brown says.

In our current COVID-19 pandemic, the U.S. has not experienced a uniform surge pattern and the number of waves thus far is not agreed upon. Markel says the first wave occurred in February and March of 2020, but shelter-in-place policies tamped down infections much like during its 1918 predecessor. Unfortunately, the infection rate surged again at the end of 2020 and then returned with the Delta variant in summer of this year.

Some parts of the country viewed this summer’s spike as the fourth wave — not the third. And Seattle is currently in its fifth wave, according to Christopher Baliga, an infectious disease specialist at the Virginia Mason Medical Center in Seattle. He says that although public health interventions and vaccinations have helped to lower infection rates, infectious diseases like COVID-19 and the H1N1 virus are spread by “raging through a community of susceptible hosts and then moving on.”

Modern travel makes it much easier for these viruses to move on to new, susceptible hosts. Whereas global travel in 1918 involved weeks-long boat rides, it now entails hours-long flights. Baliga says rapid travel spread coronavirus variants and likely contributed to surges. He anticipates the current pandemic will continue into a third year.

Markel also thinks the battle with COVID-19 will continue. “We will play a game of whack-a-mole with pockets of [the] unvaccinated,” he says. “What I predict is that it becomes an endemic disease, and it will bounce around.”