Is There Any Harm in Swearing Around Your Kids?

Despite what you might think, science says dropping four-letter words around your children may not be all that bad. 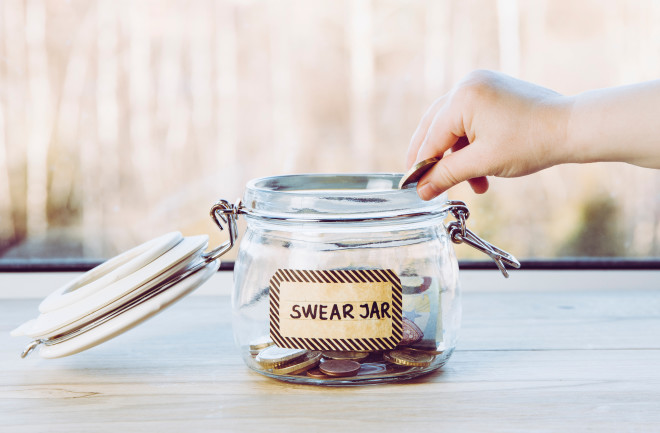 Kids can be a damn headache, no matter how much we love them. Regardless, swearing at them is probably never a good idea. But what about using curse words around your children? Is there any harm in them growing up in an environment that sometimes sounds like a sailor’s canteen?

For me, the question is a pressing one; we just had a baby girl, and my reporter’s predilection to swear hasn’t slowed in the week since. But before taking any drastic measures like cleaning out my mouth with a bar of soap or learning how to be a more respectable member of society, I decided to see what the science says first.

Parents have always been concerned with swearing around children for a number of reasons. Some worry that dropping a few f-bombs will send children on a spiraling path that creates other problems in their behavior — something like the idea of a gateway drug. “It might be the marijuana of languages,” says Benjamin Bergin, a cognitive scientist at the University of California San Diego and the author of the book What the F: What Swearing Reveals About Our Language, Our Brains, and Ourselves. “It might lead them to hard, aggressive behavior.”

Other parents may worry about the social consequences of their kids learning to swear. Children are sponges, reflecting what they hear at home. They don’t always know the subtleties of the proper time and place for adult language. A few ill-timed words in class may land your child on their wrong side of their teacher, which could have consequences for learning or grades, Bergen says.

Bergen was similarly concerned about this when he had his first kid, and looked to science for answers. But he found little research supporting any negative effects of swearing around your children, with a few key caveats.

One of the few studies related to this topic was a 2011 paper involving middle school children in Missouri. Researchers asked more than 200 kids about swearing they heard in video games or on television, what they believed about those swear words and whether they were aggressive with other people.

“Results revealed a positive association between exposure to profanity in multiple forms of media and beliefs about profanity, profanity use, and engagement in physical and relational aggression,” said the authors of the study, published in the journal Pediatrics. But Sarah Coyne, the first author of the study and a scientist at Brigham Young University in Utah at the time, noted that “on the whole, it’s a moderate effect,” in a press release. “Profanity is kind of like a stepping stone,” she continued. “You don’t go to a movie, hear a bad word, and then go shoot somebody. But when youth both hear and then try profanity out for themselves, it can start a downward slide toward more aggressive behavior.”

Swearing in the context of verbal abuse can also certainly lead to negative effects. For example, a 2007 study in The Journal of Early Adolescence correlated kids exposed to more abusive homophobic slurs with increased stress, anxiety, depression and a decreased sense of belonging.

But Bergen didn’t find much hard evidence that swearing itself, when not used in the context of abuse, had negative effects on children. Given that the topic of the potential negative impacts of swearing is such a high-stakes issue, you would think there would be lots of evidence if such a thing were true. “All the worries about parents swearing around their kids are ill-founded,” he says.

Bergen also notes that being exposed to swearing may help children learn about the nuances of society. Parents are often concerned that their kids may not be experienced enough to handle it, but hearing this type of language might actually help illuminate those subtleties. And in many cases, we're often more worried with how swearing from our children could be seen as a reflection of our parenting skills.  “If a three-year-old swears at their daycare teacher, the kid likely won’t be blamed so much as the parent,” Bergen says.

Any child that has gone through potty training, for example, has already learned about the importance of social context. Bergen believes the topic of swearing opens a similar potential for conversations about the appropriate context for different behavior in society. With his own kids, Bergen says that these talks often lead to more interesting conversations about social situations with really low stakes — they are just words, after all. “There might actually be benefits to those conversations,” he says.

Another important element to consider is the coolness factor. “You use profanity as a way of violating norms,” Bergen says. But at the same time, children who grow up listening to their parents swear may even be less inclined to do it. “If your parents do it, it’s not cool to do it,” he says.