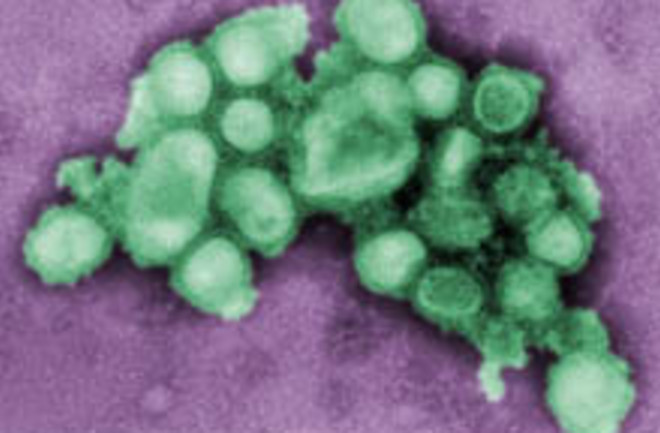 One week ago the world suddenly took note of swine flu, as a growing death toll in Mexico and the first rumors of cases in other countries raised the possibility of a pandemic. Now, after a fearful week of public paranoia and near hysterical reactions from some governments, researchers have taken their first hard look at the genetics of the virus. While the Centers for Disease Control still says it's

, some researchers are arguing that the virus may be no more dangerous than the seasonal flu that hits every winter.

But at this point, it is impossible to predict with any accuracy how the virus will continue to evolve [BBC News].

The H1N1 virus that is currently infecting humans is a blend of two viruses, a Eurasian swine flu and a North American swine flu, explains Raul Rabadan, a researcher who has analyzed the new virus.

Influenza viruses mutate constantly and they also swap genetic material with one another promiscuously, especially if an animal or person is infected with two strains at once. Rabadan's team said this particular strain looked partly like another hybrid, or what scientists call a reassortant, virus [Reuters].

The North American virus appears to contain genes from human and bird flu viruses as well, left over from previous genetic shufflings. Flu researcher Wendy Barclay, who has also studied the virus's genetic makeup, says that what she has seen thus far raises few red flags.

When a flu virus binds to the upper respiratory tract, it tends to cause mild illness but can be easily spread as people cough and sneeze, Professor Barclay explains. If a virus binds further down in the lungs, it tends to cause much more severe illness, as in the case of the H5N1 avian flu virus which has caused concern in recent years [BBC News].

This swine flu virus appears to bind to the upper respiratory tract, Barclay says. While much more work needs to be done to truly understand the new virus, researchers also reported that there

seems to be nothing unusual as yet in another protein in the centre of the virus, called NS1, which is linked to the strength of the immune response the virus produces. In some more pathogenic viruses, it is this NS1 protein which initiates a "cytokine storm", a particularly severe immune reaction that can be fatal in even healthy young people [BBC News].

Even if the H1N1 virus ends up being comparable to a seasonal flu virus in its impact, that still means that more deaths are likely to occur, experts say.

"Let's not lose track of the fact that the normal seasonal influenza is a huge public health problem that kills tens of thousands of people in the U.S. alone and hundreds of thousands around the world," said Dr. Christopher Olsen, a molecular virologist who studies swine flu [Los Angeles Times].

. Scientists do not think that people who received the seasonal flu shot this year have any immunity to the new virus. However, pharmaceutical companies are already examining ways to make a vaccine targeting the H1N1 virus. Cases in the Northern Hemisphere are expected to drop off in the summer time, when hot and humid conditions are less conducive to the virus's spread. But drug makers could have a vaccine ready for the fall if the virus seems poised for a comeback. Related Content: DISCOVER: The Five Worst Government Responses to Swine Flu 80beats: World Health Organization Ups Pandemic Alert Level for Swine Flu 80beats: First U.S. Death From Swine Flu Is Reported as Outbreak Spreads 80beats: As Swine Flu Spreads, Focus Shifts to a Potential Vaccine 80beats: Fears of a Swine Flu Pandemic Increase as the Virus Goes Global 80beats: Deadly Swine Flu Outbreak in Mexico City Prompts Fears of a Pandemic 80beats: Bird Flu in Egypt and Swine Flu in California Raise Guarded ConcernsImage: CDC. A culture of cells infected with the virus.