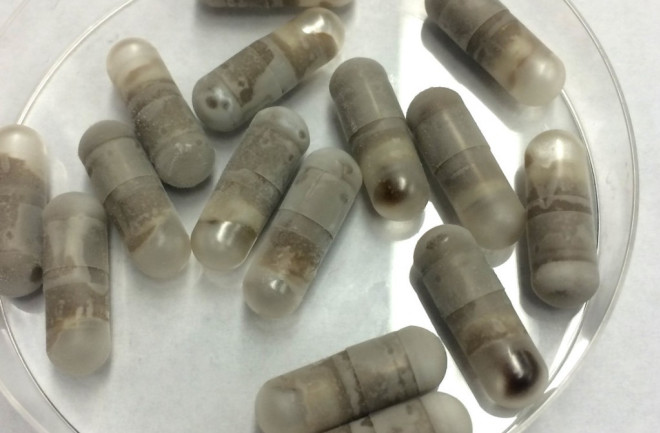 The poop pills (Courtesy: Hohmann Labs) The healing powers of poop are now available in pill form — and a new study has found that just two days of the treatment can cure a dangerous infection that kills 14,000 Americans per year. The pills take the place of fecal transplants, which have gained credibility in recent years as a method of treating Clostridium difficile infection, but which require delivery by enema or a tube down the digestive system. Scientists say the pills, which contain filtered, healthy fecal matter, offer a cheap, convenient and safer way to “make the medicine go down.”

The pills, created by researchers at Massachusetts General Hospital in Boston, start with stool from healthy donors in a saline solution. The contents are filtered to extract helpful bacteria, and the cocktail is then piped into pill capsules and subsequently frozen. Patients pop the pills straight out of the freezer, where they can be stored for up to 250 days. In a small and preliminary trial, the pills cured the diarrhea symptoms in 19 out of 20 people with mild to moderate C. difficile infections. Each patient popped 30 of the pills over a two-day period, and their bowel movements fell from a median of 5 per day to 1 per day eight weeks later. Fourteen of the 20 patients were cured after the first two-day treatment, and five others — sicker than the rest — were cured after a second two-day, 30-pill treatment. Further, not a single participant showed adverse side effects due to the pills. Researchers published their findings Saturday in the Journal of the American Medical Association.

The team from Boston isn’t the first group to put poop in pill form, but they were the first to rigorously test the oral treatment’s efficacy. The next step is to replicate the same success on a larger scale. And although the pills aren’t marketed, the authors of the study are making them available to qualified patients without participating in clinical trials, the New York Times reports. The treatment may sound like a bitter pill to swallow, but it's certainly better than the alternative.