Everything to Know About Allergies

Sometimes the immune system attacks itself, causing a dizzying set of symptoms that can leave us incapacitated. 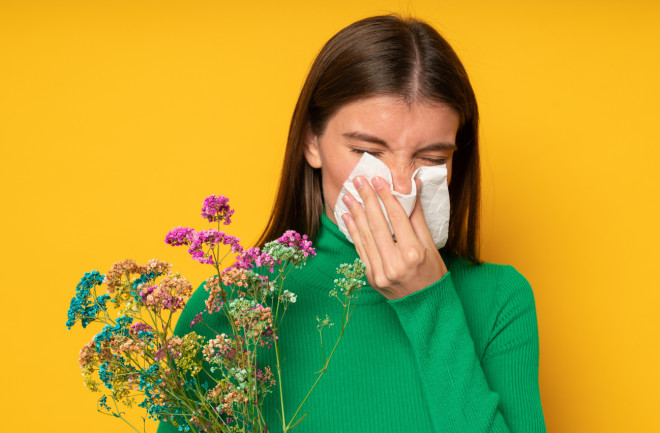 The minute you step outside or open the windows, you feel it: First, your throat gets scratchy and your eyes begin to water. A few minutes later, you’re sneezing. The next day, you wake up to a full set of symptoms — a runny nose, itchy eyes and a sinus headache.

For some, allergies occur in the spring, when the pollen count ticks up. Others are plagued in the fall, when ragweed begins blooming. Still others suffer year-round. But what exactly causes allergies? What’s happening in the body’s immune system to cause such an overwhelming reaction?

It’s important to note that allergens activate the immune system in different ways. According to Caroline Sokol, an allergist at Massachusetts General Hospital and an assistant professor at Harvard Medical School, the most common allergens are things like pollen and pet dander. But asthma and food allergies can cause the same immune system response, called a Type 1 hypersensitivity reaction.

It happens when the antibody immunoglobulin E (IgE) loads onto basophil and mast cells, immune system cells that modulate our inflammatory response. When IgE is exposed to potential allergens, it activates these cells — which respond by dumping out granules that cause a localized response. “These granules are full of things like histamines that break open and cause us to sneeze, cough, swell and get hives,” says Sokol.

Poison ivy, on the other hand, doesn’t activate IgE or an antibody response. Instead, it activates T cells when the body encounters what seems to be an allergen. T cells are a variety of white blood cells that grow in bone marrow and mature in the thymus; they’re experts at going to war with whatever they deem to be an invader.

Skin allergies are a great example. The skin’s reaction to an allergen isn’t caused by the allergen itself but instead by the immune system trying to destroy the allergen (and anything in its wake). “T cells go into the skin at the site of the exposure and attack any cell that seems like it’s been in contact with the allergen,” says Sokol.

The same is true of metal allergies. You might have experienced one yourself, perhaps by pulling off that cheap ring or those clunky costume earrings, as evidenced by the discolored skin that’s left behind. These reactions are often caused by nickel.

“Nickel hypersensitivity happens when our skin begins to react to the nickel that seeps out from cheap jewelry,” says Sokol. The immune system sees the allergen and reacts in the same way that it does to poison ivy. But there’s still a lot we don’t know about what protein the nickel comes into contact with to activate an immune response.

We’ve explored the most common allergies and their interactions with the immune system, but what about more serious reactions like anaphylactic shock? This condition often causes dangerous symptoms and, in some cases, can be deadly.

According to Sokol, anaphylaxis is activated by IgE just like other common allergens — but the reaction isn’t localized. Instead, it can take over the entire body, causing the airways to narrow. This makes it difficult to breathe, in addition to lowering blood pressure, bringing on rashes, and inducing nausea and vomiting.

“The allergen moves systematically all over the body to activate enough cells to cause a whole-body reaction,” which in turns causes the body to self-destruct, says Sokol. Still, she adds that there’s a lot we don’t know about what causes anaphylaxis. Case in point: It’s also possible that an allergic response in certain parts of the body may move systemically as a result of the nervous system, which in turn causes a body-wide response.

There’s no doubt that the immune system is a complex set of organs, perfectly designed to protect the body from outside invaders. But in an effort to seal its gates, sometimes it attacks itself, causing a dizzying set of symptoms that can leave us incapacitated. While the results are most often minor, in some they can be deadly — and researchers have yet to completely understand why.