The Chemistry of Artificial Sweeteners

Pour a little fake sweetener on it, baby. 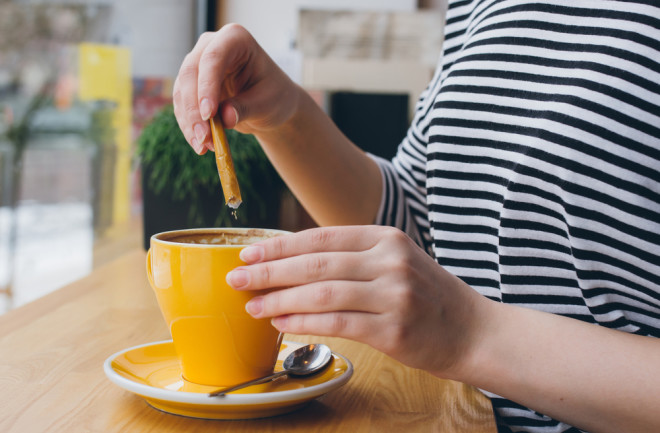 In the past year, shares of Tate & Lyle, one of the world's largest manufacturers of sweeteners, have nearly doubled in price. And sugar has had nothing to do with it. The company sold its stake in Domino Sugar four years ago, then came up with something much more profitable: sucralose, also known as Splenda. The sweetener is sold in yellow boxes and sachets with royal-blue script reminiscent of Domino's packaging. "Made from sugar, so it tastes like sugar," the slogan claims, but like all other sugar substitutes, sucralose was born in a laboratory. The country's entire supply is produced in one well-guarded and famously secretive facility in Alabama, where truckloads of common table sugar are shipped in weekly, to be modified via a complex chemical process involving chlorine and phosgene gas. The result is so intensely sweet that Tate & Lyle has to cut it with 600 parts filler to approximate a natural sweetness.

What can make a chemical so sweet? And is it bad for us? The questions aren't trivial: Eight out of 10 Americans now consume some sort of artificial sweetener. Last year alone the food industry introduced 2,225 reduced-sugar and sugar-free foods, many of them made with sucralose. Chemical additives are nothing new, of course — most processed foods contain more than one artificial flavoring, emulsifier, coloring, or gelling agent — and sugar substitutes are among the most-studied additives in the world. Yet rumors of their side effects persist, and their escalating potency demands attention.

"There are a lot of people who have been looking for the perfect sweetener for a long time," says Eric Walters, a biochemist at Rosalind Franklin University of Medicine and Science in Chicago. Walters himself has studied artificial sweeteners for nearly 25 years, so he's well aware of the central irony of his field: The most successful sugar substitutes have all been discovered by accident. Saccharin was invented in Baltimore about 130 years ago by two chemists at Johns Hopkins University who were experimenting with coal-tar derivatives. Aspartame was found in the 1960s by a medical chemist in Illinois who was investigating a drug for gastric ulcers. Sucralose was discovered in 1976 by a graduate student at King's College London. His head researcher had told him to test some compounds, but he misunderstood and tasted them instead.

Of the three sweeteners, sucralose has been touted as the most natural, but that claim "has more to do with clever marketing than with chemistry," Walters says. Although sucralose is made from sugar, its chemical structure is significantly different: A molecule of the artificial sweetener has three chlorine atoms, whereas sugar has three pairs of oxygen and hydrogen atoms. By contrast, the only unnatural component in aspartame is a methyl ester bond that connects phenylalanine and aspartic acid, two amino acids abundant in the human body. The body's digestive enzymes recognize aspartame as a protein and break it down much as they would a natural compound. Sucralose, on the other hand, slips through undigested, as does saccharin — a compound of carbon, nitrogen, oxygen, and sulfur atoms. "The body doesn't know what to make of it, so it doesn't make anything," Walters says.

How can such different structures all taste sweet? Until very recently, the answer was anyone's guess. Thousands of sweet-tasting compounds belonging to more than 150 chemical classes have been discovered, including low-molecular-weight carbohydrates, aminoacyl sugars, amino acids, peptides, proteins, terpenoids, chlorinated hydrocarbons, halogenated sugars, N-sulfonyl amides, sulfamates, polyketides, anilines, and ureas. Scientists have long known that our taste buds contain receptors that react to all these compounds, but no one knew exactly how they worked.

Then four years ago Charles Zuker, a rather aptly named neuroscientist at Howard Hughes Medical Institute, made a startling announcement: All the sweet things in life are perceived by a single receptor. Zuker used the human and mouse genomes to isolate genes associated with taste. He found more than 30 that code for bitter receptors but only a single receptor devoted to sweet. "Evolutionarily, it makes sense," says Grant DuBois, a chemist for Coca-Cola. "The theory being that there are a lot of varyingly toxic bitter compounds we have to know how to distinguish between, but everything sweet can be lumped together as good."

The one-receptor theory had a lot of explaining to do. The biggest problem was what corporate chemists call synergy. "If you ever look at the sweeteners in sugar-free gum, you'll notice that there's nearly always a list," DuBois says. That's because certain sweeteners amplify one another. When you add saccharin to, say, cyclamate (a compound of carbon, oxygen, sulfur, and nitrogen), as in the original Tab recipe, the result is notably sweeter than if you simply add up the sweetening power of each. "Synergy is a well-known phenomenon in drug design, and it always means at least two receptors working together," DuBois says. By the same token, factors such as temperature (cold) and caffeine can inhibit some sweeteners but not others, which also suggests that multiple receptors are at work. Still, Zuker was adamant: Knock out either of the two subunits on the protein receptor he identified and laboratory mice lose all sense of sweet, regardless of which compounds they're given.

But what if each subunit had its own binding site, Zuker wondered? Finally, last September,  biochemists from Senomyx (a company cofounded by Zuker) proved him right. There is only one sweet receptor, they concluded. But unlike any other receptor in the body, it has more than one region that can be activated by different molecules. "It's like having a gun with two triggers," DuBois says.

Chemists have only begun to tap this receptor's true potential. Cyclamate is 45  times as sweet as sugar, aspartame and  saccharin are 180 and 300 times as sweet, respectively, and sucralose is 600 times sweeter. But the next generation of aspartame, known as neotame, is 13,000 times as sweet as sugar, and other compounds have been isolated that are more than 100,000 times as sweet. "The differences are because the molecules have different affinities," Walters says. Sucralose, for instance, fits more snugly in the receptor than sucrose, partly because its chlorine atoms carry a stronger charge than the oxygen atoms they replaced. Neotame, which was recently approved by the FDA, locks in so tightly it keeps the receptor firing like a machine gun.

How Sweet It Is

The relative potency of sugar compared with artificial sweeteners:

Even when they've been cut with fillers, none of these sweeteners can truly pass for sugar. Saccharin has a disconcertingly metallic aftertaste — not, thankfully, because it leaches aluminum from cans but because it also triggers bitter and sour receptors. Aspartame and neotame are fragile molecules that break down relatively quickly on supermarket shelves and can't withstand the heat of cooking. Sucralose can take the heat and is stable, but it lacks the bulk, the browning ability, and the "mouthfeel" of real sugar.

That these sweeteners were invented by chemists has long made them suspect. Saccharin was listed as an "anticipated human carcinogen" in 1981, sucralose has been shown to weakly mutate genes in test tubes, and aspartame has triggered fears about everything from autism to multiple sclerosis. Still, no concerns have held up under scrutiny. Food additives have to meet much higher standards than drugs, Walters points out, because their drawbacks aren't weighed against their medical benefits. Aspartame, for instance, has been studied more than any other substance in FDA history, yet it has consistently been declared safe. Sucralose has shown no carcinogenic effects in animals, even at high doses. And saccharin was rehabilitated as a safe additive in 1997, when scientists found that rats used in earlier studies had a predisposition to cancer unrelated to the sweetener.

The best reason to be sour on artificial sweeteners is more familiar. Although sucralose and saccharin aren't absorbed by the body, they're not quite calorie-free: The dextrose and maltodextrin that manufacturers use to bulk them up contain about a quarter of the calories found in sugar. And although diabetics choose sugar substitutes over sucrose, animal studies suggest that artificial sweeteners can also trigger the release ofinsulin — albeit in much smaller quantities. Studies show that people who drink sugar-free sodas can lose more weight than those who drink regular sodas, but some nutritionists worry that catering to the body's craving for sweets will only increase the appetite for them. Sugar by any other name is still best in small doses.