Chimpanzees, for instance, don't have nearly as much heart disease as us humans. 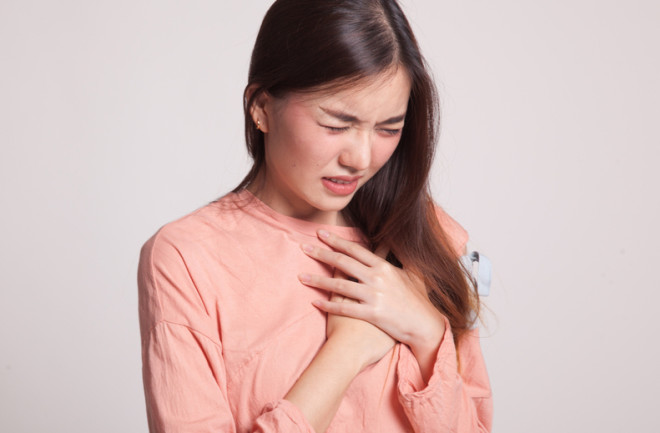 There are many things that set us humans apart from other species: large brains, bipedalism, a predilection for puns. But we’re also defined by our singular vulnerability to cardiovascular disease.

Heart attacks and strokes, the leading causes of death in humans worldwide, are rampant in our species and our species alone. Even chimpanzees, our closest relatives in the animal kingdom, suffer from cardiovascular disease at far lower rates, and for different reasons. So how did we get stuck with a plague of plaque-filled arteries?

A recent study by researchers from the University of California, San Diego, suggests that a mutation during the lower paleolithic period, which began around 3.3 million years ago, could be the culprit. This single genetic alteration inactivated a gene called CMAH, leaving early humans without the mechanisms that seem to protect other mammals from heart disease.

Namely, the loss of the gene made our forebears deficient in molecules called sialic acids. In the study, published in the Proceedings of the National Academy of Sciences, the researchers genetically modified mice to resemble humans in the deficiency of a sialic acid called Neu5Gc. In the modified mice, they found that rates of atherosclerosis — the buildup of fats and cholesterol on artery walls that leads to heart attack — had doubled compared to normal mice. Those that ate red meat meat saw their risk compounded even more.

Those results offer new insight into the origin of a disease that claims a quarter of all lives in the United States, and a third globally. “That’s usually explained on the basis of modern times,” said Ajit Varki, one of the lead researchers on the study. People chalk atherosclerosis up to high cholesterol, sedentary lifestyle, obesity, smoking, age —  “all the usual suspects.”

But 15 percent of people, when they experience their first cardiovascular event, don’t meet any of those criteria. Even healthy vegetarians drop dead for no apparent reason at a far higher rate than other mammals. And conversely, virtually every non-human animal, including chimpanzees leading a sedentary life in captivity, evade heart disease despite many of the same risk factors.

Donna Arnett, a former president of the American Heart Association and dean of the University of Kentucky’s College of Public Health, who was not involved in the study, warned against inferring too much about human heart conditions from those observed in mice. She also noted that although some people suffer heart attacks without obvious causes, there are likely other factors involved in those cases. In other words, the CMAH gene may not be the only thing making us the heart attack species.

Varki agreed, saying the gene is only one piece of the puzzle. “We’re not saying we found the answer for why humans are so prone to heart disease, but we found a major component,” he said. “It’s the first one that I know of that explains the difference between humans and chimpanzees and other animals.”

Arnett said she expects to see more insights into the genetics of cardiovascular disease. Other researchers are on the case as well. Thorsten Leucker, a researcher with the Ciccarone Center for the Prevention of Heart Disease at Johns Hopkins University’s School of Medicine, who also was not involved in the study, is building a genetic database to look for genes related to heart disease. “I think it’s a fascinating idea,” he said, “to find a family that has this [CMAH] gene turned on to understand what the implications are.”

He also suggested that with modern gene editing techniques, like CRISPR, it could be possible to switch the CMAH gene back on. This is an ethically fraught proposition, he acknowledged, especially given the danger of unforeseen consequences. For example, the loss of CMAH could have been a tradeoff for early humans — it seems they may have dropped the gene because it made them an easy target for malarial parasites.

But maybe, Leucker argued, this new research hints at ways to curb the deadliest affliction of our species. “This could be big, or this could be a bust,” he said. “The question is always, what do we do with this information?”

Varki discouraged the idea of intentionally manipulating the gene after millions of years of evolution, but he said his team’s research does offer potential solutions to cardiovascular disease. In addition to reaffirming the fact that exercise and moderate red meat intake are essential for heart health, Varki says his study might help to develop an “antidote” for the excessive inflammation to which our species is so susceptible. “Knowing what is uniquely different about humans,” he says, “can let us know what is uniquely addressable in humans.”

More From Discover
Health
Is 'Expired' Milk Safe to Drink? Here's How to Know When to Throw Away Food
Health
Extreme Fatigue: 4 of the Longest-Lasting Sporting Events
Health
What Science Says About the Weight-Loss Potential of The One-Meal-a-Day Diet
Health
Walking vs. Running Benefits: Should You Walk or Run for Exercise?
Technology
What Is a Social Media Cleanse?
Mind
Gut Bacteria's Role in Anxiety and Depression: It’s Not Just In Your Head
Recommendations From Our Store
My Science ShopDiscover STEM Kits
My Science ShopDiscover 2022 Calendar
My Science ShopStrange Science
My Science ShopElements Flashcards
Shop Now
Stay Curious
Join
Our List