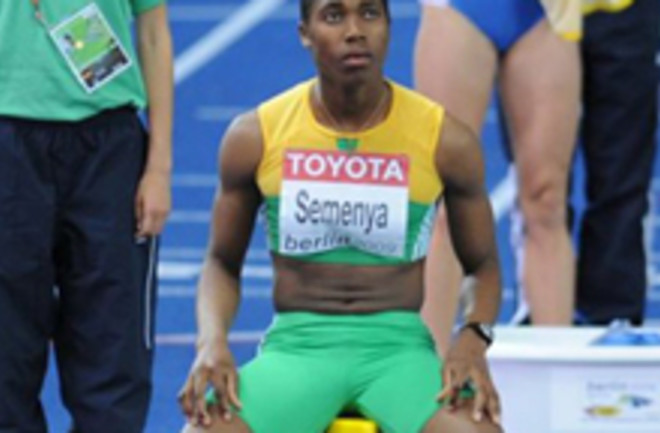 When 18-year-old Caster Semenya blew past the competition in the women's 800-meter race at the World Athletics Championships in Berlin this week, she got more than a gold medal. The South African athlete ran straight into a controversy about both the nature of gender and hers in particular. Some other runners contend that Semenya, with her stereotypically masculine build, is really a man, while the more temperate governing body, the International Association of Athletic Federations, says it needs to determine if she has male characteristics that give her an unfair advantage. To settle the question, the IAAF has ordered tests by a gynecologist, an endocrinologist, a gender expert, and a psychologist. Gender expert Richard Auchus says

In the 1960s, athletic federations began testing athletes by scraping cells from their mouths and testing them for a pair of X chromosomes, which typically establishes a person's sex as female (as opposed to the XY chromosomes typically carried by males). But the tests were halted in the 1990s as critics pointed out that

Whether an athlete has an unfair advantage isn't necessarily determined by their sex chromosomes.

Genes are only a blueprint, and sometimes nature doesn't follow the blueprint precisely. Take the examples of XY athletes who appear to be women. At least five enzymes are required to synthesize testosterone, the hormone that produces most male characteristics, and occasionally one of those enzymes is defective. When that happens, the genitals are typically male and tiny, the person doesn't have much body hair and he is generally feminized [Los Angeles Times].

Such athletes, without high levels of testosterone to produce greater muscle mass and other male characteristics, are usually allowed to compete as females. Other hormonal anomalies can create XY people with female genitals but no reproductive capacity, or XX people with normal female reproductive organs but a masculine appearance. In Semenya's case, no one except a few disgruntled competitors seems to be suggesting that the South African is deliberately lying about her gender. The runner's family members and old friends have confirmed that Semenya grew up as a girl--albeit one who liked to play sports with the boys. Gender expert Myron Genel believes that should be enough to let Semenya keep her gold medal.

"We don't discriminate against tall women and say they shouldn't compete because they're too tall. We don't discriminate in track events on the basis of whether you have a high prevalence of fast twitch or slow twitch fibres," says Genel. "If they have been born and raised as women and they think about themselves as women I would say let them compete as women" [Nature News].