In fact, researchers are investigating the hallucinogenic drugs' ability to treat other substance abuse disorders. 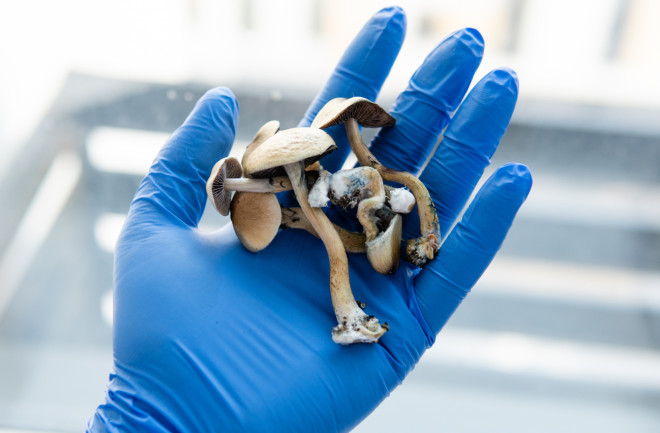 In 2004, a team of pharmacologists at the University of Michigan Medical School, led by William Fantegrossi, set out to test the addiction potential of psilocybin — a hallucinogenic compound derived from certain mushrooms — on a cohort of rhesus monkeys. The researchers presented one group of primates with a lever that, when pressed, injected them with a dose of the compound. A second group was hooked up to levers that injected mere saline solution.

In similar experiments, monkeys have been known to repeatedly press levers that inject the drugs heroin, cocaine and even methylenedioxymethamphetamine (MDMA). It’s a phenomenon that researchers attribute to the “reinforcing effects” of these drugs. But when it came to psilocybin, the results were erratic. Some repeatedly pressed the lever to the point of intoxication; others swore off the lever for good after one dose. On average, the monkeys were no more prone to self-administering psilocybin than the less exciting saline solution.

During the last two decades, scientists have reopened a line of inquiry into the therapeutic applications of psychedelic compounds that was abruptly closed after the drugs were first outlawed in the 1960s. But the rhesus monkey study is one of many pieces of evidence for something that researchers have long suspected: Unlike other widely used recreational drugs, certain psychedelics aren't reliably addictive.

Although we tend to think of addiction in terms of human behavior, it has neurological roots. In the brain, addiction is manifested in what researchers call the “reward pathway.” When a person is stimulated by a reward — chocolate cake, their favorite song, good sex — the brain responds by increasing the available concentration of dopamine, a neurotransmitter. This response, in moderation, is experienced as pleasure.

Most recreational drugs, including caffeine, alcohol, nicotine, marijuana, opiates and cocaine, artificially elevate the available concentration of dopamine in your brain. In other words, they create the feeling of pleasure irrespective of natural stimuli. Psychedelics, on the other hand, operate by an entirely different pathway.

The term “classic psychedelics” is used by researchers to refer to a family of chemically-similar drugs, called tryptamines, that includes psilocybin, lysergic acid diethylamide (LSD), dimethyltryptamine (DMT) and mescaline (the psychoactive component of peyote). These compounds are distinct from compounds like ketamine and phencyclidine (PCP), which are sometimes referred to as psychedelics but have an entirely different mechanism of action.

Though classic psychedelics have little affinity for dopamine receptors, they mimic another neurotransmitter: serotonin. In particular, these compounds bind to a certain serotonin receptor that occurs throughout the brain and has been shown to be involved in mood regulation, facial emotion recognition and memory.

Unlike most drugs, however, a person’s psychological reaction to tryptamines is highly unpredictable. One person could take psilocybin and have a profound, joyful experience. Another could take the same dose and endure anxiety or horror. “Classic psychedelics are unreliable,” says Matthew Johnson, a psychedelics researcher at Johns Hopkins Medicine. “Even if you have an optimal environment, for the same person sometimes it’s blissful and sometimes it’s terrifying. It’s not an easy drug escape if that’s your goal.”

Users of almost any drug experience diminishing effects after habitual use. The same opiate dosage could knock out a first-time user while simply staving off an addict’s cravings. But for psychedelics, tolerances can develop much more quickly.

In a 2016 chapter on psychedelics in Pharmacological Reviews, pharmacologist David Nichols writes that “daily administration of LSD leads essentially to complete loss of sensitivity to the effects of the drug by day 4.” Even if a user attempted to circumnavigate this by rotating through different psychedelic compounds, the effects would be greatly diminished if not eliminated. Studies have shown that tolerance to LSD also translates to tolerance for psilocybin and mescaline.

Together, these three factors — the absence of an effect on dopamine levels, the unreliability of the psychedelic experience and the rapid onset of tolerance — are thought to contribute to low addiction potential in classic psychedelics.

According to the Substance Abuse and Mental Health Services Administration, the portion of patients reporting hallucinogens as their primary substance of abuse didn’t rise above 0.1 percent from 2005 to 2015. In comparison, the portion of patients that reported alcohol as their primary substance of abuse never fell below 33 percent.

If you peruse the growing body of research on psychedelics, you won’t find many articles addressing the addiction potential of tryptamines themselves. Instead, you’ll come across a number that investigate the efficacy of these compounds in treating substance abuse disorders. In particular, LSD may be an effective treatment for alcoholism and psilocybin, along with therapy, may help people kick nicotine addiction.

Read More: Psychedelics Could Be the Future of Psychotherapy

In October, the National Institutes of Health awarded a team led by Johnson the first federal grant for psychedelic treatment research in over half a century. The nearly $4 million grant will allow the researchers to conduct the first-ever double-blind randomized clinical trial on psilocybin as a treatment for nicotine addiction.

“I didn’t know if it was going to be this year or five years from now,” Johnson says, “But, with the data continuing to come out and showing these really promising effects, it was almost unthinkable that NIH would choose not to fund it.”