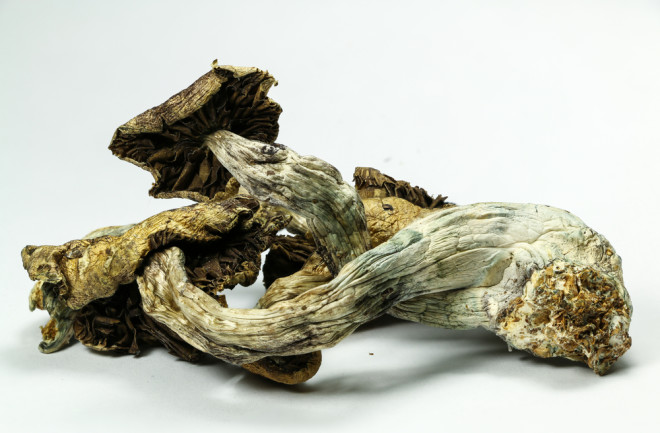 Scientists have known about psilocybin, the psychoactive ingredient in “magic mushrooms,” ever since Albert Hofmann isolated it in 1958. It’s taken until now, however, for them to figure out how it’s produced.

Researchers at Friedrich Schiller University Jena in Germany sequenced the genomes of two psychedelic mushroom species and used the information to identify four key enzymes involved in the process of creating psilocybin. Knowing how the mushrooms make the compound opens the door to large-scale bioengineering of the chemical that has increasingly been shown to benefit people suffering from depression, alcoholism and other disorders.

Farming or genetically-engineering fungi is difficult, so mass-producing psilocybin with the kind of quality controls demanded by the drug industry has never before been feasible. Now that the pathway and ingredients are known, the process could potentially be applied on an industrial scale. For their study, the researchers engineered bacteria to reproduce some of the steps involved in synthesizing psilocybin as a test of the process. They ended up with a simplified approach to producing the compound that could be applied on a larger scale in the future

The process, published in the journal Angewandte Chemie, starts with a molecule called 4-hydroxy-L-tryptophan and strips off a carbon dioxide molecule before adding on phosphorus and methyl groups. Each step takes a different enzyme — in fungi it takes four, but the researchers were able to slim it to three with their method.

There was one attempt to figure out the series of steps that turns tryptophan into psilocybin back in 1968, but researchers got the order wrong. The subsequent Schedule 1 classification of the drug forestalled further research. In recent years, there’s been something of a psychedelic science renaissance,and small-scale studies have begun to reveal myriad benefits to psilocybin and have reinforced its safety. As with any drug, however, producers must ensure that their product meets stringent safety protocols. Bringing the synthesis of psilocybin out of the woods and into the lab is a big step toward potentially putting psychedelics on the market.