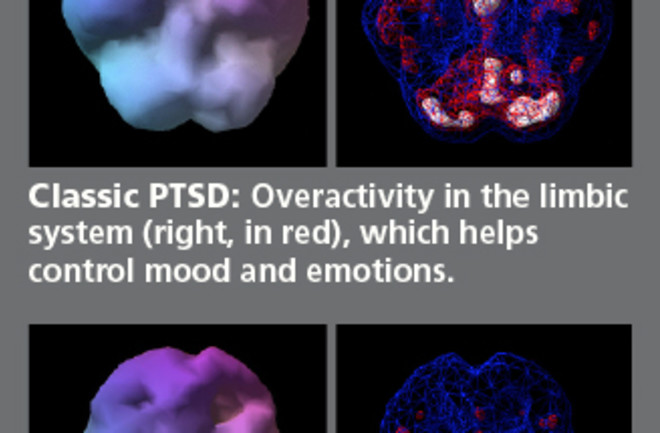 Over a million soldiers have served in the wars in Iraq and Afghanistan. Of the men and women who have returned from combat, more than 100,000 have been diagnosed with posttraumatic stress disorder (PTSD). Over 300,000 more have been told they have a traumatic brain injury (TBI). In many cases, symptoms are the same: insomnia, anxiety, irritability, poor concentration and limited impulse control.

The treatments for these two conditions are very different. The problem is, there hasn’t been a consistently accurate diagnostic test to distinguish between PTSD and TBI. That changed earlier this year when two studies, one of which involved 20,746 patients, found that a type of medical imaging called single photon emission computed tomography (SPECT) showed clear differences in the brains of people with TBI or PTSD. Largely through analyzing how well blood flows (or doesn’t) through various parts of the brain, SPECT scans show with 80 to 100 percent accuracy whether someone has TBI, PTSD or both.

Understanding which is which is huge. Physical damage from TBIs, for example, can depress brain activity. If a doctor mistakes it for PTSD and prescribes sedatives that are often helpful for that condition, those drugs can further dampen cerebral function and worsen symptoms.

“If you go for help and the help is ineffective, it’s not a neutral experience,” says Daniel Amen, founder of Amen Clinics and lead author of the larger study, which was published in July. “It wastes time and money, it’s demoralizing, and it can hurt people.”