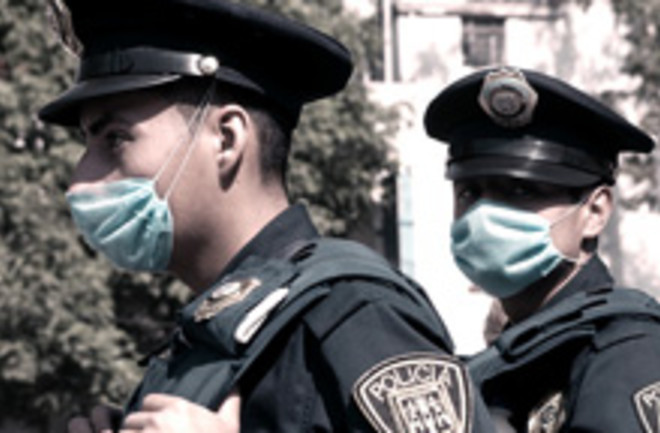 The swine flu outbreak that began in Mexico over the past few weeks has gone global, spread to new continents by infected air travelers returning from Mexico. Confirmed cases have been reported in the United States, Canada, and Spain, while suspected cases are being investigated in France, the United Kingdom, Brazil, Israel, and New Zealand. Amid fears that a global pandemic is in the offing, governments around the world are taking new precautions.

Singapore, Thailand, Japan, Indonesia, and the Philippines dusted off thermal scanners used during the 2003 SARS crisis and were checking for signs of fever among passengers arriving at airports from North America [AP].

The situation remains worst in Mexico City, where many schools and public buildings are closed and doctors have warned citizens to wear face masks and avoid crowds. The virus is believed to have killed 103 people in Mexico, and sickened at least 1,600. But so far, the cases reported elsewhere in the world haven't been as deadly. A 23-year-old Spanish man has tested positive for swine flu, and at

least 17 further suspected cases are under investigation in Spain.... The patients concerned had all recently returned from Mexico. None of the cases is thought to be life threatening [BBC News].

There are now 20 confirmed cases in the United States, including eight associated with a New York City elementary school where some students had recently been to Mexico for spring break. While the United States has declared the outbreak a public health emergency, health officials note that all the U.S. cases thus far have been mild, with no deaths reported. Swine flu typically infects just a few people each year who have been in direct contact with pigs, but now the virus has mutated into a form that can be transmitted from person to person. Experts say it isn't yet clear how much of a threat the virus poses. Says World Health Organization spokesman Peter Cordingley:

"These are early days. It's quite clear that there is a potential for this virus to become a pandemic and threaten globally.... But we honestly don't know," he added. "We don't know enough yet about how this virus operates. More work needs to be done" [AP].

Martin Cetron of the Centers for Disease Control and Prevention says the most important question to answer is how many mild cases Mexico has had.

“We may just be looking at the tip of the iceberg, which would give you a skewed initial estimate of the case fatality rate,” he said, meaning that there might have been tens of thousands of mild infections [in addition to the 1,600 serious cases and about 100 deaths]. If that is true, as the flu spreads, it would not be surprising if most cases were mild.... Another hypothesis, Dr. Cetron said, is that some other factor in Mexico increased lethality, like co-infection with another microbe or an unwittingly dangerous treatment [The New York Times].

While some infectious disease experts are scrambling to determine how the virus spreads and whether it is mutating into either a more lethal or less dangerous form, others are trying to work out how to best protect people from the illness.

More From Discover
The Sciences
This Virus Could Clarify the Origins of Complex Life
Health
Wearable Copper Could Protect You Against Bacteria and Viruses
Health
Hunter Gatherer’s Gut Bacteria Might Show History of Our Microbiome
Mind
A Promising Treatment for Mental Disorders: Fecal Matter Transplants
Health
What to Feed Your Microbes
The Sciences
Labs Are Assembling Synthetic Genes, and It's Cheaper Than Ever
Recommendations From Our Store
My Science ShopDiscover STEM Kits
My Science ShopDiscover 2022 Calendar
My Science ShopStrange Science
My Science ShopElements Flashcards
Shop Now
Stay Curious
Join
Our List