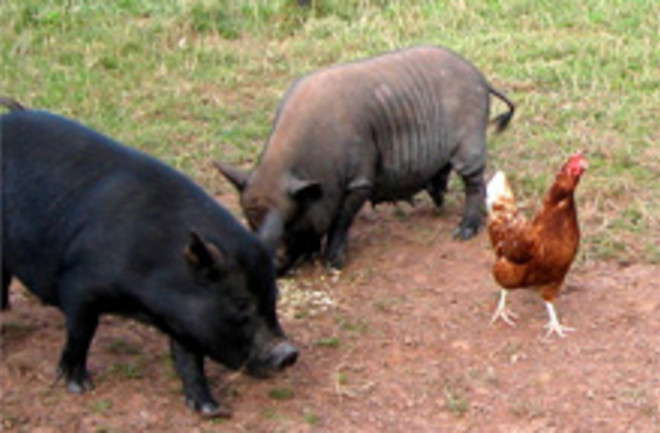 Egyptian health officials have just reported two deaths from bird flu within days of each other. The dangerous virus variant H5N1 struck down a six-year-old boy and a young woman, bringing the total death toll in Egypt to 25. While bird flu experts note that

Egypt has seen a surge in human cases in recent months, with 16 confirmed since the start of the year, compared to seven cases between January 1 and April 17 last year [Reuters],

they also say that the Egyptian people's level of alarm is out of proportion to the threat. Rumors have appeared in the Egyptian media that the virus is circulating widely, and that some people get "silent infections" which show no symptoms, but still allow them to pass on the virus. The rumors have been fueled by the pattern of recent infections: Many of the infected patients have been toddlers, leading to the belief that stronger adults are also infected but simply show no symptoms.

Although thousands of Egyptians have rushed their children to hospitals this flu season, there is no evidence yet of asymptomatic avian flu cases or any significant mutation in the H5N1 virus. “Right now, it’s all hot air,” said Dr. Robert G. Webster, a flu expert.... “I hope to hell it’s not happening, because it would mean the virus is adapting to humans. But there’s not a shred of data” [The New York Times].

While the H5N1 virus rarely infects people, the looming fear is that the virus may mutate into a form that can be transmitted easily from person to person, which could spark a deadly pandemic. However, an outbreak of swine flu across the world from Egypt, in Southern California, has reminded people of the hazards of overreacting before all the information is in. Swine flu is found in pigs and very rarely in humans who have direct contact with pigs; the United States reports one human case every one or two years. However, two California children were diagnosed with the disease this spring, sparking an investigation by the Centers for Disease Control.

Since neither of the two children, a 10-year-old boy and a 9-year-old girl, had contact with pigs, it "increases the possibility that human-to-human transmission of this new influenza virus has occurred," according to a CDC report. The girl did attend an agricultural fair four weeks before becoming sick, she said, but did not have any contact with pigs or other livestock [CNN].

The incident has brought back memories of another swine flu outbreak in 1976 among army recruits at Fort Dix, New Jersey, which taught public health officials a tough lesson. That winter, 13 men got sick and one died of what proved to be swine influenza viruses--viruses that were thought to be similar to the one

responsible for the 1918 Spanish flu pandemic. U.S. officials ordered the manufacture of swine flu virus vaccine and the country proceeded to launch a mass immunization program that saw upwards of 40 million people injected with the vaccine. The feared pandemic never occurred. But the vaccine appeared to trigger a high level of cases of Guillain-Barre syndrome, a type of paralysis [The Canadian Press]

, and thousands of vaccine recipients filed injury claims. UPDATE on April 24, 4:40 EST: Not all swine flu is created equal, it would seem. While health officials still say that the virus currently circulating in the American Southwest is not a major cause for concern, another outbreak of swine flu in Mexico City has already killed at least 16 people. Related Content: 80beats: Winter Flu Season Brings New Bird Flu Outbreaks Across Asia 80beats: Lack of Genetic Diversity in Chicken Coops Could Worsen Bird Flu Outbreaks 80beats: Ignored Strain of Bird Flu Could Lead to a Pandemic… of Light Sneezing DISCOVER: The Science of Avian Flu