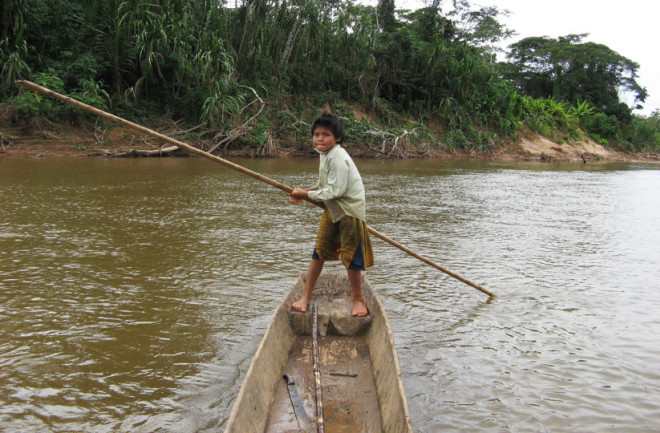 It sounds like basic, common-sense advice: living actively with a focus on natural diet is the secret to a longer, healthier life. But researchers were still surprised to discover that an indigenous group in the Amazon that practices these concepts manages to stave off some of the effects of aging.

The roughly 16,000 Tsimané live electricity-free in the lowland rainforests of Bolivia. They avoid most contact with the outside world and still largely adhere to a traditional way of life, hunting game and catching fish. They practice a basic form of agriculture and gather other food from the rainforest around them. Their economy isn’t based on money in the traditional sense.

Hillard Kaplan, a professor of health economics and anthropology at Chapman University, has worked with the Tsimané for nearly 20 years. The average lifespan of the Tsimané was in the early 50s — a low number compared to Americans, who typically live to their late 70s on average.

“They die relatively early, mostly from infectious disease,” says Andrei Irimia, a gerontologist at the University of Southern California also involved in medical research involving the Tsimané. But a number of Tsimané last into their 70s, 80s, or even 90s. Kaplan noticed that the elderly showed few signs of dementia, and rarely had heart attacks.

The trouble was, the Tsimané lived far from the nearest facility housing a CT scanner that could help researchers understand what was happening. “They live in a very inaccessible area,” Irimia says.

The Tsimané also lacked access to the type of medical care that could treat parasitic infections, disease or other health problems. However, researchers helped bring them to their facilities in Trinidad, Bolivia for treatment and provided them with some household goods needed in their villages.

As part of a relationship Irimia describes as “very long-standing and amicable,” researchers also ran CT scans on Tsimané elders that came for treatment. “Our collaboration has been with approval with the villagers from the village leadership, the Bolivian government and U.S. federal government,” he says.

According to a recent study published in The Journals of Gerontology: Series A, Irimia, Kaplan and their colleagues examined the brains from 750 elder Tsimané people via CT scans. They analyzed the loss of brain volume in Tsimané and compared it to people from industrialized societies of the same age.

They found that the decrease in brain volume was 70 percent slower in Tsimané compared to people in western populations. When brain volume loss accelerates too quickly, it can cause issues typically associated with aging like dementia, strokes and Alzheimer’s disease.

Somewhat paradoxically, Tsimané brains also displayed high levels of inflammation. Inflammation is typically associated with shrinking brains in Western populations. But while inflammation in the elderly in industrialized areas is complicated, stress and a lack of exercise are considerable culprits in those societies.

Unpublished analysis shows the Tsimané have low levels of stress, Irimia says. Instead, they likely experience inflammation due to the high intestinal parasite load they carry – often five or six types of parasites on average.

“That leads to high inflammatory loads throughout their lives that stays much higher than in the United States,” Irimia says, adding that they also contract higher levels of infectious diseases like tuberculosis that can cause inflammations.

Despite the inflammation, the Tsimané elders showed a lack of signs of aging in other important ways. The recent research on brain volume followed a 2017 study published in The Lancet revealing that the Tsimané had the lowest rate of coronary artery disease known in the world.

Irimia believes that both come down to the lifestyle and diet the Tsimané practice. Their subsistence way of life involves a menu high in fruits and vegetables, fish and lean meats from animals they hunt in the forest. These meats lack the trans fats often associated with cardiovascular disease in industrialized societies.

“The healthy diet of the Tsimané is likely protective of their brains and their hearts,” Irimia says, adding that their salt intake is quite low.

“On a typical day the men go hunting, the women take care of cooking in the villages,” he says. “They do a lot of physical activity.”

The lesson to learn here isn’t necessarily that everyone needs to go live in the Amazon Rainforest, but rather that diet and exercise are important for staving off some of the negative effects of aging. “If we do live a lifestyle that’s healthy — healthy diet and high levels of exercise — we may be implicitly protecting ourselves from the effects of inflammation,” Irimia says.

The Tsimané themselves are quite interested in the results of these studies, which have been relayed back to them by some of the researchers.

“They feel very good that they are able to contribute to the education of others, and improve the lifestyle of people,” Irimia says.