A Lesson From the Zebrafish: How to Mend a Broken Heart 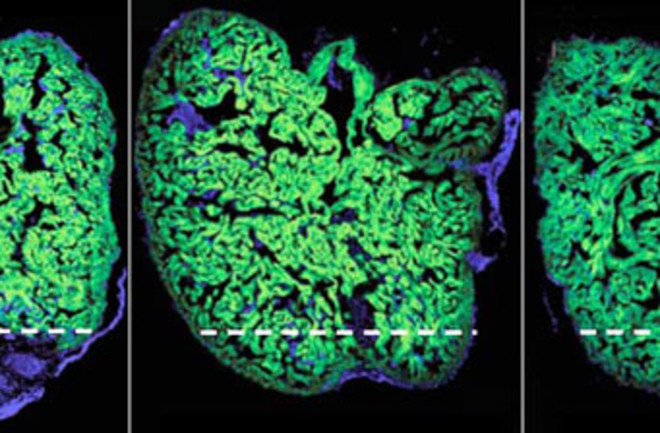 When a person has a heart attack, the heart repairs its damaged muscle by forming scar tissue. As a result, the heart never truly goes back to the way it was. But when a zebrafish has a heart injury, like having a large chunk of it chopped off, it grows a brand new piece to replace it. Two independentreports published in the journal Nature show that within days of an injury to its heart, the zebrafish has the remarkable ability to regenerate most of the missing cardiac tissue using mature heart cells--not stem cells, as some researchers had suspected. The findings help explain why human beings can't regenerate a heart or missing limbs. The reports contradict a previous study (pdf) done by one of the research teams in 2006 that suggested that stem cells, the general all-purpose cells that develop into all the mature and functional cells of the body, were responsible for self-repair. The finding suggest that doctors have been on the wrong track with recent stem cell-based therapies for heart attack patients.

Many heart patients have received injections of stem cells, often ones taken from their own bone marrow. But the beneficial effects have generally been unremarkable [The New York Times].

In one study, a team led by Chris Jopling and Juan Carlos Izpisúa Belmonte

.Then they chopped off part of the fish's heart and watched to see if the fish would employ stem cells to regrow the heart or use mature heart muscle cells, known as cardiomyocytes. In just a few days, scientists found the zebrafish had regrown the missing piece of heart. On further observation, scientists found that all the cells in the new part of the heart glowed green, proving that existing heart muscle cells were the principal or only source of the new tissue

Further experiments showed that the cardiomyocytes near the injury site seem to take a step backward in development, detaching from one another and losing their typical shape—presumably to make it possible for them to start dividing again as they replenish the lost tissue [ScienceNOW].

Experiments conducted by Kenneth Poss, the researcher behind the 2006 study, showed similar results. Both teams say the next step is to identify the cellular signals that trigger the regeneration process. The scientists say that prior to heart failure, mammalian heart cells go into a state called hibernation, where the muscle cells stops contracting in an effort to save themselves. Hibernating cardiomyocytes are also seen in zebrafish, but unlike the mammal cells, the fish cells then take another step and begin proliferating. Scientists are trying to understand what gives the fish cells the ability to start multiplying, and hope to conduct further studies on mice to see whether mammalian cells can be induced to follow suit.

"Maybe all they need is a bit of push in the right direction," Jopling said [HealthDay News].