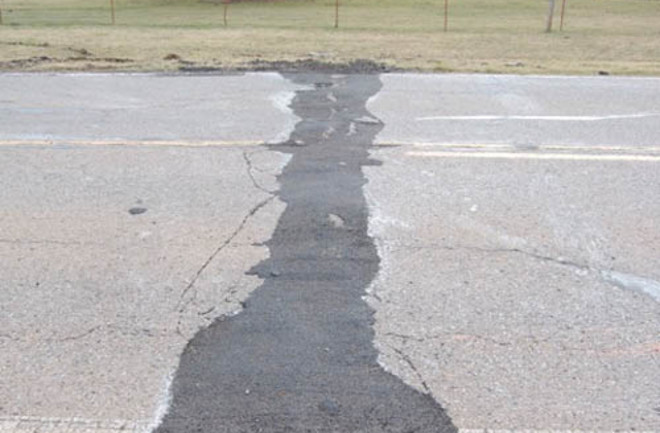 A 2011 magnitude 5.7 quake near Prague, Okla., apparently triggered by wastewater injection, buckled U.S. Highway 62. Image courtesy John Leeman via the Earth Institute at Columbia University. Fracking has provided a growing domestic supply of natural gas in recent years. As a result, there has been a lot of talk lately about whether or not this method of fuel extraction produces earthquakes. Now research indicates that at least one part of the process---disposal of the wastewater from both fracking and conventional oil extraction---does indeed pose a real geological risk. In the last four years, the number of earthquakes in the central United States has been 11 times greater than it had been over the three decadesprior, according to geologists' findings. Five of those quakes have been magnitudes of at least a 5.0. Researchers say this seismic activity is the result of injecting wastewater deep underground. And according to a study published this week, wastewater injection was the cause of a magnitude 5.7 earthquake in Oklahoma in 2011---the largest earthquake to date thought to have been caused by human activities. The wastewater in question comes from two fuel-extraction processes. Hydrofracking relies on a mix of water and chemicals to crack rock and release the natural gas it contains. Conventional oil extraction uses water to force oil reserves out of wells. Since the U.S. has ramped up its domestic fuel production, wastewater disposal has spiked as well. In the case of the Prague, Okla. earthquake, the wastewater was being pumped out of one set of oil wells and injected into another set that had already been drained of their oil. This wastewater injection had been going on at the site for 17 years without incident before the nearby Wilzetta Fault finally gave way. The researchers suspect that the wastewater was slowly refilling the spaces once filled with oil, and succeeded in doing so for over a decade with little or no pressure buildup. But records from the wellhead indicate that injection pressure got 10 times greater between 2001 and 2006. This stress eventually forced the fault to jump. The earthquake in Oklahoma was the largest the state has ever experienced, and was felt in at least 16 others. When it hit on Nov. 6, 2011, the series of major tremors injured two people, buckled a highway and destroyed 14 homes. The swarm of aftershocks numbered in the thousands, and continues to this day---as does the injection of wastewater near the site. The Oklahoma Geological Survey says these aftershocks could still be natural, but the researchers say the likelihood of a big earthquake from human-caused pressure changes, even with relatively small amounts of water, is higher than they once thought. Plus, the risks are much greater now that they know the pressure can build during decades' worth of injection before an earthquake finally strikes.