Typhoons Over Taiwan May Trigger Gentle Earthquakes and Prevent Damaging Ones 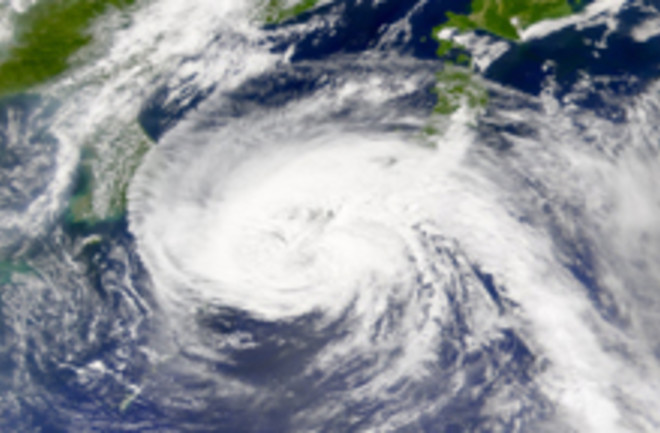 Earth scientists say that from all appearances, Taiwan should be rocked periodically by devastating earthquakes. The island sits on the boundary between the Philippine Sea tectonic plate and the Eurasian plate, and geologists describe the area as one of the most seismically active in the world.

Here, the colliding plates move so rapidly that they build mountains at a rate of almost 4mm per year. [Researcher Alan] Linde said that in geological terms that is almost like "growing mushrooms". "It's surprising that this area of the globe has had no great earthquakes and relatively few large earthquakes" [BBC News]

, says Linde. Now, Linde and his colleagues think they have an explanation for Taiwan's seismic silence in the region's typhoons--the tropical cyclones that originate in the northwest Pacific Ocean. Their new study suggests that the

typhoons passing over the island have been triggering quakes that harmlessly release fault strain over hours and days rather than destructively over seconds or minutes. And these slow earthquakes, they speculate, may be staving off a big one [ScienceNOW Daily News].

Slow earthquakes do not emit seismic waves that are strong enough to be detected by seismometers, so to detect the quakes' activity, the researchers placed highly sensitive 'strainmeters' inside boreholes [Nature News],

which ranged from 650 to 900 feet deep. As the researchers report in their paper, published in Nature, they detected 20 slow quakes between 2002 and 2007, and found that 11 of those coincided exactly with typhoons.

Typhoons are low-pressure systems. When the storms stir up the ocean, local sea levels change to maintain a balance in pressure on the ocean floor. "On the land side, however, there's nothing to move [to create such a balance], so the pressure on the land is slightly decreased during the typhoon," Linde said. This means the storm becomes the proverbial last straw, pushing faults that were on the verge of movement into action [National Geographic News].

Linde says it's reasonable to assume that this frequent triggering of slow earthquakes prevents a longer buildup of seismic stress, which would eventually result in a larger and more damaging quake.

But this is extremely hard to show because, as he puts it, "how do you prove something that doesn't happen?" [BBC News]