Indonesia May Face a "Supercycle" of Devastating Earthquakes 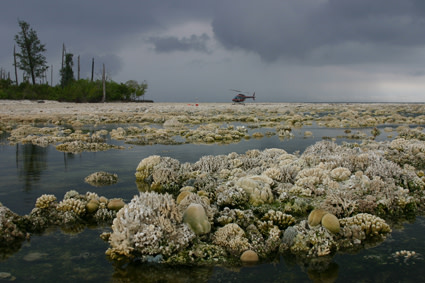 While Indonesia is still rebuilding following the devastating 2004 earthquake and tsunami that killed more than 130,000 people on the island of Sumatra alone, scientists are warning that several other major earthquakes are likely to occur in the region over the next decades. A new study examined the growth records of coral reefs off the coast of Sumatra, and say they show evidence of repeated bursts of earthquakes that relieve pressure on the Sunda fault. A shock in 2007 may be the beginning of a new cycle, researchers say. Says study coauthor Kerry Sieh:

"If previous cycles are a reliable guide we can expect one or more very large west Sumatran earthquakes ... within the next two decades" [Reuters].

As if to illustrate the point that the Indian Ocean is seismically active, reports are coming in that a 5.9 magnitude earthquake struck last night off the coast of Sumatra; happily, there have been no reports of casualties or damages, and authorities say there is no risk of a tsunami. In the study, published in Science [subscription required], researchers looked at

the growth patterns of coral reefs in the region over the past 700 years. When a quake occurs the seafloor rises up, effectively lowering the sea level so that shallow coral reefs are now above the surface. The reefs can’t grow upward, but their still submerged portions grow outward [The New York Times].

Researchers found evidence of this growth pattern about every 200 years, and say the changes to the coral reefs in the region weren't caused by one single giant earthquake. Instead, the growth patterns indicate that each cycle involves a few major earthquakes that occur over the course of several decades, in what study coauthor Aron Meltzner calls a "supercycle." The 2007 quake originated in the southern region of the Sundra fault near the Mentawai Islands just south of Sumatra, a stretch of the fault that

had been seismically calm since major quakes struck the region in 1797 and 1833, Meltzner notes.... Meltzner and his colleagues suggest that the Mentawai Islands’ September 2007 temblor is the opening salvo in a new supercycle of quakes for the region [Science News].

Related Content: 80beats: Geologists Find One Cataclysmic Tsunami in Every 600 Years of Thai Dirt DISCOVER: Natural Selections: Life After the Wave DISCOVER: Did a Tsunami Wipe Out a Cradle of Civilization?Image: Science