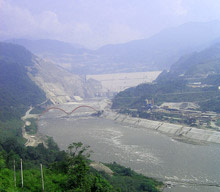 The devastating earthquake that killed 80,000 people in China's Sichuan Province last May may have been triggered by a recently built hydropower dam that lies only three miles from the quake's epicenter, some researchers are arguing.

left more than five million people homeless. It remains a raw and emotional topic for most Chinese, and the government has been quick to quash any suggestion that Zipingpu may have been responsible for the catastrophe. Researchers have been denied access to seismological and geological data to examine the earthquake further [Telegraph].

The few researchers who have investigated the subject are now urging restraint in government plans to build more dams, but they say their advice is unlikely to be heeded. The first evidence regarding the Zipingpu dam's possible contribution to stresses along the fault have been presented at the American Geophysical Union meeting and the Chinese journal Geology and Seismology, according to a report in Science[subscription required], and now other researchers and officials are beginning to speak up.

Fan Xiao, the chief engineer of the Sichuan Geology and Mineral Bureau in Chengdu, said it was "very likely" that the construction and filling of the reservoir in 2004 had led to the disaster. "There have been many cases in which a water reservoir has triggered an earthquake," said Mr Fan. "This earthquake was very unusual for this area. There have been no seismic activities greater than a magnitude seven quake along this particular seismic belt before" [Telegraph].

Fan says that researchers haven't definitively proved a causative link between the dam's filling and the earthquake, but he believes the evidence is strong enough to merit careful study before more dams are built.

“We should readjust our existing plans and take a more cautious attitude when planning projects,” he says. “But I am pessimistic that many of these large-scale constructions will be canceled, because of the strong economic interests that benefit hydro-power developers and local governments” [Science, subscription required].