The West Antarctic Ice Sheet Has Not Collapsed, But New Findings are Concerning. Do they Indicate a 'Climate Crisis'? 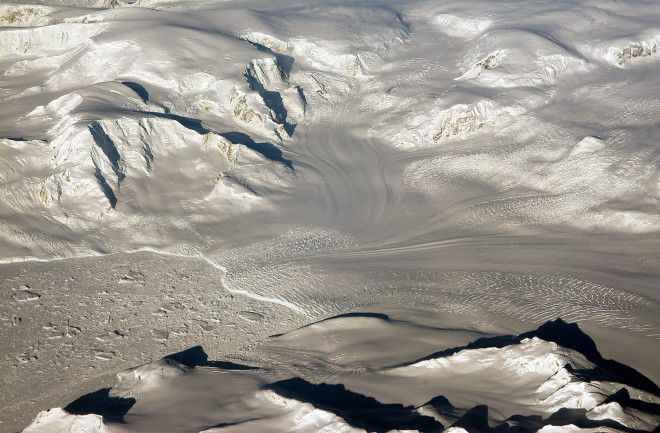 Glaciers in West Antarctica, as seen during NASA's Operation IceBridge research flight in the region on Oct. 29, 2014. (Source: NASA/Michael Studinger) | Udpate: I've been asking some scientists what they think about characterizing the climate as being in "crisis," as well as other issues I raise below. As they come in I'll tack them on to the bottom of the post. So make sure to scroll all the way down. | Earlier this year, new research offered strong evidence that melting of the massive West Antarctic Ice Sheet has passed the point of no return. If true, this means it is now in irreversible retreat and will "collapse," as scientists put it, over the course of 200 years, give or take. As the ice tumbled into the sea and melted, such a scenario would eventually raise sea level by 16 feet. That's enough to swamp coastal areas where many tens of millions of people live worldwide. Luckily, however, the time frame is long — if not from a geologic perspective, certainly from a societal one. This week new research has suggested that the melt rate of glaciers in West Antarctica has tripled during the last decade. And another study attempts to show why: According to the research, over the past 40 years, a deep mass of water ringing Antarctica called the Circumpolar Deep Water appears to have warmed. The research also shows that warming CDW waters are intruding more and more to the undersides of glaciers that drain the West Antarctic Ice Sheet, causing them to melt from below, and speeding their passage toward the sea. It should be emphasized that the latter study isn't the final word on what's causing the melting. Some scientists take exception to its methodology. (For more on that, check out Carolyn Gramling's story in Science.)

The research from earlier in the year is featured in a story I wrote for Discover's Year in Science issue, which has just been published. All in all, it looks like a terrific issue. But I take exception to the headline and subhead that go with my story. The headline is "Climate in Crisis," and the subhead is "West Antarctic Ice Sheet Collapses."

The first is arguable. The subheading really is not.

Science is showing pretty clearly that humanity has not done nearly enough to grapple with the overall issue of climate change. As a result, some major challenges — such as significantly higher sea level from collapsing ice sheets — likely are ahead of us. Does that constitute a "climate in crisis"?

Here's one definition of "crisis": "a time when a difficult or important decision must be made." In that sense, perhaps we are in a moment of crisis, since scientists are saying that we are running out of time to avoid significant climate impacts down the road. But by definition, climate change is a phenomenon that takes place over decades. That means this "crisis" is taking place in a kind of slow motion. And I'm sure to most folks, it doesn't seem like a crisis at all.

So my preference would have been not to use such a loaded term. I think it will invite dismissal from people who are inclined to be skeptical when strong language like that is used. That would include me, since skepticism is one of the journalistic attributes I value highly.

Even so, a case can made for the use of that word in the headline.

That brings me to the sub-head: "West Antarctic Ice Sheet Collapses" is simply wrong. The ice sheet has not collapsed yet. If that had happened, it would already constitute the worst cataclysm ever to hit humanity. You certainly would have heard about it by now — because cities would be underwater or headed there relatively quickly.

I suppose an argument can be made that the collapse process is underway, so in that sense the ice sheet is now "collapsing." But that's not what the headline says. It's just incorrect.

Having been the editor of a science magazine, I completely understand the need for compelling headlines that will cause people who are flipping the pages (or finding things to read through social media, for that matter) to stop and check out an important story like this. And even here at ImaGeo, I sometimes find myself in a struggle to figure out how far I can go with a headline without turning it into something better suited for a supermarket tabloid than a science magazine.

In this case, I think Discover did not find the right balance. What do you think? Please feel free to let me know in the comments section. (But please be civil and constructive, and stay on point.)

| Update: I've put out the call to some scientists to get their take on the issues I've raised here. I'm appending them here, with the first comments I received at the top.

3 p.m. MST, 12/5/14: In an email message to me this afternoon, James White, director of the Institute of Arctic and Alpine Research at the University of Colorado, weighed in on the use of the word "crisis." (Full disclosure, I also work at the University of Colorado, where I direct the Center for Environmental Journalism.) Here's what he had to say:

One thought on the issue of "crisis" and climate change: while sea level rise and temperature change are likely to be relatively slow, and thus themselves don't seem to be a crisis, such plodding changes can trigger more abrupt, crisis point-type changes, particularly in social systems. For example, at what point will the National Flood Insurance Program recognize their staggering potential liability to even a meter of sea level rise? And will that force Congress to make coastal dwellers pay in full? Such an impact on coastal property values will likely constitute a crisis for many, including the politicians who represent those communities.

I emailed him back to ask whether he thinks "climate in crisis" is justifiable in any sense now? And if so, is it advisable to talk about it in those terms? Here was his response:

Perhaps a little. On the one hand, there is no clear screaming crisis now (although that will come), so claiming there is one seems over the top to me. But then, is this not a bit like the "obesity crisis"? Its something that creeps up on us slowly, and when its evident we have a problem, we somewhat need to label it a crisis to take any meaningful action.

He also pointed out that the "basic idea of slow changers triggering fast changers is one we explore in much greater depth in the NAS Abrupt Change volume." If you're interested to explore that, go here. From that press release, you can click on a link to download the entire report. |

3:10 p.m. MST, 12/5/14: For the second story under the "Climate in Crisis" headline in Discover's Year in Science issue, I interviewed Kevin Trenberth, a senior scientist at the National. He shared these comments with me by email:

We do not have to solve the problem today, but we have to start, and the crisis is that we have not really started. Or we have not started in a way that is commensurate with the magnitude of the problem, yet. I add the "yet" with optimism that maybe we will get going. And of course there are at least two aspects to this. The first is emissions [of carbon dioxide and other greenhouse gases] and their mitigation. And the second is adaptation and adequately planning for the consequences, given that mitigation will not suffice. But mitigation may make the consequences much more manageable.