According to a new estimate, the impending iceberg could be the size of Delaware and extend more than 60 stories beneath the surface

Antarctica's soon-to-be iceberg is visualized here in a graphic from the European Space Agency. An ever-widening rift in an Antarctic ice shelf has grown from 70 miles long back in December 2016 to 124 miles long now. That means there's just another three miles to go before the fissure reaches the ocean. When that happens, the ice shelf will let loose a berg extending across 2,316 square miles, according to a new estimate based on satellite radar data released today by the European Space Agency. At its deepest, the berg will extend 689 feet below the sea's surface, ESA says. That's about 64 stories high. By comparison, the Empire State Building in New York is 102 stories tall. Combine that Delaware-sized geographic extent with the thickness and you get a berg that contains a mind-boggling 277 cubic miles of ice. By my calculations, that really does come to more than a million times the volume of the Empire State. 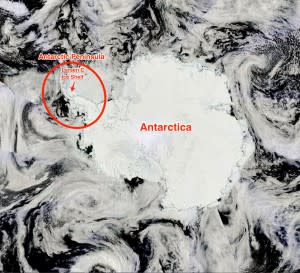 Please click to enlarge. (Image source: NASA) The lengthening and widening rift that will birth the gargantuan berg is occurring in the Larsen C Ice Shelf along the Antarctic Peninsula. According to a recent blog post by scientists of Project Midas, an Antarctic research project investigating the effects of a warming climate on the Larsen C ice shelf:

When it calves, the Larsen C Ice Shelf will lose more than 10% of its area to leave the ice front at its most retreated position ever recorded; this event will fundamentally change the landscape of the Antarctic Peninsula.

It's unclear exactly what will happen to the iceberg once it breaks free. According to Anna Hoag of the University of Leeds, quoted in an ESA press release:

As for this new Larsen C berg, we are not sure what will happen. It could, in fact, even calve in pieces or break up shortly after. Whole or in pieces, ocean currents could drag it north, even as far as the Falkland Islands. If so it could pose a hazard for ships in Drake Passage.

Ice shelves naturally shed large chunks as part of their natural life cycles. "That's how they behave," says Ala Khazendar of NASA’s Jet Propulsion Laboratory. But this chunk will be one of the largest ever observed since satellite monitoring of the region began in the 1990s. When the new iceberg finally does crack free, it could be the beginning of an irreversible retreat. Scientists aren't sure about this, but if it does happen, it could eventually result in the demise of the entire ice shelf. https://youtu.be/WAM0tZB0aIc Ice shelves float on sea water. So a complete collapse of Larsen C would not raise global sea levels all by itself. But Larsen C, as with all ice shelves, retard the flow of grounded ice streams and glaciers behind them. So when one collapses, the ice streams and glaciers accelerate toward the ocean. And that does help to raise sea level.