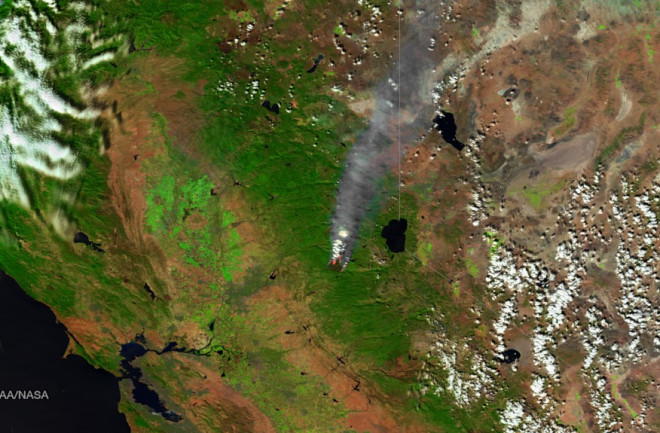 The Suomi NPP satellite's VIIRS instrument captured this view of California showing areas of burning and the smoke plume from the massive King Fire. (Source: NOAA Environmental Visualization Laboratory) California's King Fire continues to blaze out of control in heavy timber and steep terrain in Eldorado National Forest north of the community of Pollock Pines. The fire ignited Saturday and spread with breathtaking speed through a landscape desiccated by hot temperatures and California's profound and record-breaking drought. So far, the King Fire has scorched more than 70,000 acres, forcing nearly 2,800 people to evacuate their homes. As of this morning, 4,425 people were participating in the battle against the blaze, which is just 10 percent contained. A 37-year-old man from Pollock Pines has been arrested on a felony arson charge in connection with the fire.

King Fire Pyrocumulus cloud. (Source: King Fire Facebook page.) The false-color satellite image at the top of the post shows areas of burning and a long smoke plume. It was captured on Wednesday, September 17 by the VIIRS instrument on the Suomi NPP satellite. For a view from the surface, click the thumbnail at right. It shows a towering pyrocumulus cloud that blossomed above blaze. The Weather Guys at the Cooperative Institute for Meteorological Satellite Studies offer a clear explanation of this fascinating phenomenon:

Here's what the pyrocumulus clouds from the King Fire looked like from space:

The Moderate Resolution Imaging Spectroradiometer. or MODIS, on NASA’s Aqua satellite captured this image of the King Fire on September 17, 2014. (Source: NASA Earth Observatory) Note those puffy white clouds protruding from the browner smoke plume. Those are the pyrocumulus clouds. Red outlines in the image show where the MODIS instrument aboard NASA's Aqua satellite detected unusually warm surface temperatures associated with fire on September 17. The big lake to the north and east is Lake Tahoe.

Unfortunately, California is unlikely to get much relief from the drought. A bit of Southern California is expected to see some improvement during the rest of the year. But that's about it. (For the details, click on the thumbnail at left.) With continuing climate change, wildfires are expected to be more frequent and intense, fire seasons will likely last longer, and the size of individual fires are projected to increase. According to a new report published by the Environmental Defense Fund, the Institute for Policy Integrity at NYU School of Law, and the Natural Resources Defense Council, already steep costs for fighting fires are likely to increase significantly. Already, climate change is contributing to increases in wildfires across the western U. S. and Alaska, according to the recent U.S. National Climate Change Assessment. And there are other worrisome changes as well:

Warming has also led to novel wildfire occurrence in ecosystems where it has been absent in recent history, such as arctic Alaska and the southwestern deserts where new fires are fueled by non-native annual grasses (Ch. 20: Southwest; Ch. 22: Alaska). Extreme weather conditions linked to sea ice decline in 2007 led to the ignition of the Anaktuvuk River Fire, which burned more than 380 square miles of arctic tundra that had not been disturbed by fire for more than 3,000 years. This one fire (which burned deeply into organic peat soils) released enough carbon to the atmosphere to offset all of the carbon taken up by the entire arctic tundra biome over the past quarter-century.

As I pointed out my earlier post today, it is looking increasingly likely that 2014 will go down as the warmest year on record.