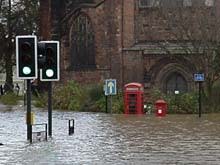 One cannot look at a single storm, flood, or drought and say conclusively, "climate change caused that." But what researchers are attempting to do lately is climate change risk assessment—figuring out how much more likely severe events may become as our world continues to warm up. Two new studies in Nature today try to do just that with heavy rains and flooding, saying definitively that warm temperatures make these events more likely.

More-localized weather extremes have been harder to attribute to climate change until now. "Climate models have improved a lot since ten years ago, when we basically couldn't say anything about rainfall," says Gabriele Hegerl, a climate researcher at the University of Edinburgh, UK. [Nature]

, a broad-based look at how much humans are contributing to intense precipitation events in the Northern Hemisphere. The simple physics of it makes sense: warmer air can hold more water. To show a link, however, the researchers pulled together a half-century of rainfall records, which they compared to the results of eight different climate models.

Richard Allan, a climate scientist at the University of Reading in England who was not part of the study, called the method employed by Zwiers "very rigorous." He added, "There's already been quite a bit of evidence showing that there has been an intensification of rainfall" events across the globe. But until now "there had not been a study that formally identified this human effect on precipitation extremes," Zwiers said. "This paper provides specific scientific evidence that this is indeed the case." [Washington Post]

looked into a particular event—the major floods of 2000

in England and Wales, the worst in the U.K. since 1766—to try to determine how much climate change increased the risk of such an event. To do so, they needed to run a countless models to sort out the variables that could skew the findings. Thankfully, the team could turn to the crowdsourcing project Climateprediction.net

project, relies on ordinary people to volunteer their computers' down time.

The team ran models simulating the real weather and, crucially, models of the region's weather as it might have been in a world without human-produced greenhouse gases. The models were run thousands of times to enable the probability of the extreme floods to be determined in both scenarios, taking 40,000 years of computing time. Global warming was found to have most likely doubled the risk of the 2000 floods, but there is a one in 10 chance that the increased risk was as high as 700% or as low as 20%. [The Guardian]

"Damaging weather events have always happened since well before humans had any substantial influence on climate," says Allen. "This research allows us to quantify how rising greenhouse gas levels may be loading the dice in favor of certain events, such as the U.K. floods of 2000, and against other events." [USA Today]

DISCOVER: The 9 Industries That Will Be Most Screwed By Global Warming (PHOTOS)