Solution for Climate Change Could Come From A Few Targeted Actions 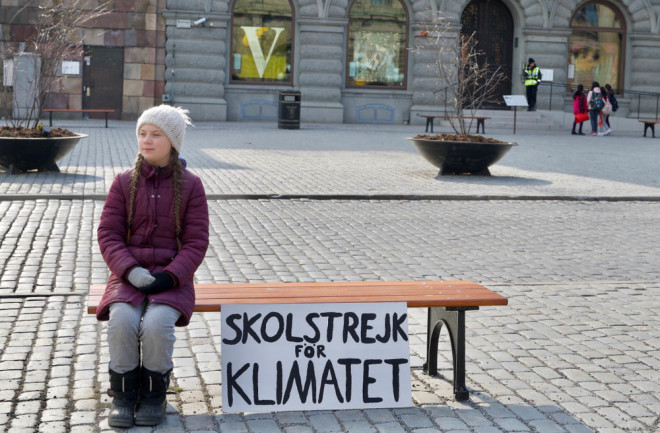 Greta Thunberg, a Swedish student who led schoolchildren in a climate change protest. (Credit: Liv Oeian/Shutterstock) If you’ve been following climate news, you’ve probably heard about an approaching “tipping point” toward climate change — the point of no return after enough small changes brought us to certain disaster. But what if the opposite were just as likely? One group of researchers thinks that a few small, positive changes could “tip” us back in the right direction. They’re calling them “sensitive intervention points,” or SIPs for short. And some of them might be inevitable — meaning we might not be as doomed as we think. The interdisciplinary team of researchers at the University of Oxford Institute for New Economic Thinking published their ideas in Science today, explaining a few ways that “a small kick at the right point can trigger a large change” for climate change.

Tip Away from Oil and Gas Companies

First of all, the team reports, companies aren’t accurately incorporating climate-change-related risks and profit projections into their business models. But ignoring climate change doesn’t make it go away. If investors were given accurate information about risks like sensitivity of infrastructure to extreme weather events, the researchers say, investments would shift toward greener options simply because it’s better for business. For example, oil and gas companies often project the price of oil is going to continue to rise by about 2 percent each year. But meanwhile, many countries are taking real actions to meet the goals set by the Paris Agreement, the international climate change pact ratified in 2016, to limit global warming to 2 degrees Celsius above pre-industrial levels. As more and more actions are taken by countries to meet this goal, demand for oil and gas will drop dramatically. Instead of the 2 percent increase each year, the price of a barrel of oil might instead drop by half. High-emission companies — not just oil and gas companies — will take serious profit hits as they replace or abandon existing infrastructure. Not accounting for these details, the authors say, effectively subsidizes high-emissions industries, inflating the amount of investments they get in false expectation for high future profits. But as soon as these risks and inevitable future costs become more transparent, current investments should organically shift away from carbon-heavy industries. Not because of any sacrificial love for the planet — just because investments go where future profits are expected.

Removing greenhouse gases from the air will cost trillions.

The reason that alternative energies like solar and wind aren’t more prevalent already is because they’re either more expensive than oil and gas or it’s just too expensive to make the switch. Solar panels on your home’s roof sound great, until you consider the tens of thousands of dollars that it’ll cost you. But these prices are changing, fast. Oil and gas have cost the same amount to produce for about a century, while the “real cost” of solar has dropped by a factor of some 6,000 since the invention of photovoltaics in 1956. It’s been dropping in cost about 10 percent every year since 1990. The only question is whether investors will speed up this process by investing in the switch, or slow it down by investing in business-as-usual despite its unsustainability. The former seems likely, argue the authors, since it’s the better business decision. “There’s a lot of hope there,” says Matt Ives, an Oxford University economist and complex systems modeler who worked on the new paper in Science. “Well, it’s not even hope, it’s just inevitable.” “Why aren’t we doing it [yet]?” he says. “They’re probably against losing profits, but I think people should be worried about whether those profits are going to continue if they continue to invest in their old ways.”

The authors point out there’s a widespread belief around the world that climate change exists and should be addressed, but until now, people have been floundering instead of acting. Climate is a big issue, sure, but when the path forward is unclear and uncertain, it’s easy to permanently move it to the back burner. But the authors point out that this is yet another place where over-sized impacts can come from small actions. The more people that get involved in a cause, for example, participating in protests, the lower the cost to that person and the greater the impact of doing so. Case in point: Greta Thunberg, a Swedish student who led schoolchildren in a climate change protest, has become a prominent activist and inspired climate strikes around the world. The last example the authors give is tipping governments into a ready position, which will allow them the option of taking climate-friendly actions. They give the example of the United Kingdom’s Climate Change Act of 2008, which on its own didn’t “kick the system,” they write, but it did create a framework in the UK government that allowed and supported policies that would reduce emissions.

Bruce Hungate, a climate change researcher not involved in this study, says there’s no silver bullet to fix the climate problem. “But maybe there’s some silver buckshot.” “What I found really interesting about this, was instead of that sort of reductionist, direct, maybe simplistic and linear way of thinking,” says Hungate, referencing strategies like carbon taxes and cap-and-trade systems, “instead, it looked at it from a whole systems perspective with the strategy of: Let’s find the most leverage. Where are the real sensitivities?” “I’ll never say we can’t solve this problem. I think we can,” says Hungate, director of the Center for Ecosystem Science and Society at Northern Arizona University. “My first reaction [to the paper] was, wow, that’s really cool.” Ives explains that the team’s goals from this Science paper are a bit out of the ordinary. “Part of the reason why we’re doing this is we want to be able to trigger these sensitive intervention points. We don’t just want to identify them, and understand them, we want to trigger them.” “Which is unusual for an academic program,” he adds. “What I see here is a cleaner, smarter, safer, and cheaper world. It’s possible.”