Even if we curb emissions, wrangling greenhouse gases will mean a price tag of trillions. 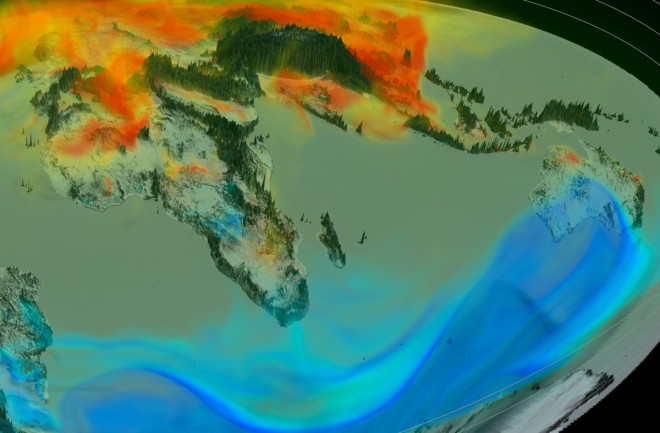 “You can think of it as taking planetary vital signs,” says Ralph Keeling, who continues his father’s work at Scripps today. The news isn’t good. In April, carbon dioxide hit 410 ppm, a 50 percent increase from pre-Industrial Revolution levels. And it’s been increasing roughly 3 ppm per year, a record rate. Last year, 175 countries agreed to reduce emissions via the Paris Agreement, which — optimistically — could hold global temperatures to an increase of 1.5 degrees Celsius since pre-industrial levels.

“We are almost there already,” says glaciologist Eric Rignot of the University of California, Irvine. “I think at some point, people will realize we’ve already passed it.”

Our current emissions trajectory locks Earth into a carbon dioxide level of at least 450 ppm, Ralph Keeling says. And burning fossil fuels at the same increasing rates through 2050 would drive those levels to their highest point in 50 million years, according to an April study in Nature Communications. Add a few more centuries of similar emissions, and carbon dioxide levels rise to those not seen in 420 million years, causing unprecedented sea level rise.

Keeling doesn’t think it’ll come to that. New efficiency standards and cleaner energy are already reducing emissions in the U.S. and other countries. If such efforts register at Mauna Loa, it could show humans still have some control. “It’s been an alarm bell so far — the curve,” Keeling says. “But if we start to take positive steps, it can become a sign of progress and hope.”

However, new research shows that reducing emissions isn’t a complete fix. “If you just stop emitting cold turkey, the temperature drops a little, but it doesn’t drop too much,” says MIT atmospheric scientist Susan Solomon. “The temperature stays almost as hot for 700 years.”

That’s because the carbon dioxide remains trapped in the atmosphere — much of it lingers a millennium later — pumping more and more energy into the ocean. So temperatures stabilize, but the seas keep rising.

This means humans actually have to remove greenhouse gases to reach levels scientists consider safe, roughly 350 ppm. And even short-lived greenhouses gases — methane lasts about a decade — will still cause sea levels to rise for centuries.

The reason is fairly simple. Greenhouse gases trap extra heat in our atmosphere, and oceans suck most of it up. As the warmer water expands, it causes sea levels to rise. And like a hot bath, the ocean must radiate its heat back out — through the atmosphere and into space — for it to cool.

Former NASA scientist James Hansen, now at Columbia University, helped launch climate change into the public sphere with his 1988 testimony before Congress. “[A level of] 450 ppm would guarantee disaster,” Hansen says now. “If you leave it in place long enough, it would guarantee that you do lose the coastal cities.”

And in a recent study in Earth System Dynamics Discussion, Hansen’s team writes that to reach 350 ppm, humans must spend the next century extracting billions of tons of carbon dioxide from the atmosphere. They calculated a range of options to reach that threshold, putting the final price tag between $100 billion and over $1 trillion — each year, for roughly 80 years.

They found that returning Earth to 350 ppm by 2100 requires planting trees on an epic scale, as well as substantial investments to boost soil fertility so it holds more carbon. We’d also need large-scale tech to remove the gas, something not currently feasible. Others are exploring alternative approaches. A Harvard University program is spending $20 million to launch particles into the stratosphere to test a kind of solar shield.

Some scientists fear that even talking about such geoengineering will embolden people to keep polluting. But that hasn’t stopped the discussion. “All the pollution we put in the air, we’re going to have to take it back,” Rignot says.

[This article originally appeared in print as "What Carbon Really Costs."]