As of the morning of May 31, 2019, smoke from Canadian wildfires covered millions of square miles of North America. 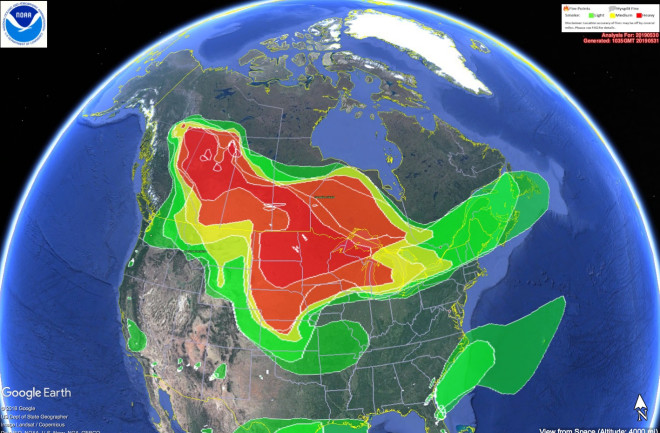 Since then, things have gotten worse, with one blaze — the Chuckegg Creek fire — exploding to nearly 1,000 square miles by this morning, up from 580. That means the fire has now scorched an area twice the size of Los Angeles. By this evening, it will likely be even bigger.

As described by Alberta wildfire officials:

The Chuckegg Creek Fire experienced extreme fire behaviour yesterday with significant growth to the south. Continued hot and dry conditions along with variable, gusty winds have proved a challenge to firefighting efforts and safety.

And that’s just one of eight fires burning out of control in the province.

Also since yesterday, smoke from the Canadian wildfires has spread far more widely. It has blown 3,000 miles to the east — all the way to Newfoundland. Even more significantly, smoke has now covered more than 2.7 million square miles of North America. (I calculated that by importing data used to make the map above of smoke coverage into Google Earth Pro.)

I find the animation of satellite images particularly striking. It shows thick wildfire smoke arriving over the Upper Midwest from the fires burning in Alberta — about 2,000 miles away.

I find the animation of satellite images above particularly striking. It shows thick wildfire smoke arriving over the Upper Midwest from the fires burning in Alberta — about 2,000 miles away.

The smoke from the Canadian wildfires is so prominent that it’s also visible from nearly a million miles away:

Check out the circled part of the image above. (And make sure to click on the image to enlarge it.) NASA’s Deep Space Climate Observatory spacecraft captured the image on May 30th from its distant orbit at the neutral gravity point between Earth and the Sun.

Smoke from Canadian wildfires partly obscured the Sun in Madison, WI on May 30, 2019. (Credit: Cooperative Institute for Meteorological Satellite Studies)

The image above is a screenshot from a time-lapse animation showing what it looked like from the ground in Madison, Wisconsin as the smoke from the Canadian wildfires rolled in and became increasingly thick. The time-lapse was acquired from a camera on the roof of the Department of Atmospheric and Oceanic Sciences at the University of Wisconsin. To watch the time-lapse itself, click here.

Air quality in Calgary, Alberta on May 31, 2019. (Credit: Environment Canada)

The screenshot above shows that as of 1 p.m. in Calgary on May 31, air quality posed a very high health risk.

There have been scattered showers in northern Alberta today. With a bit of luck, that has helped firefighters get a better handle on the blazes.

Tomorrow, the forecast is for winds gusting to 25 miles per hour. That won’t help. But starting Monday, cooler temperatures are in the offing for the region.

Even so, abnormally warm temperatures are expected to persist in the southern part of the province, and also extend into a large portion of the western United States in coming days. Parts of the U.S. Pacific Northwest have been abnormally warm and dry lately, so I wouldn’t be surprised if we start seeing an upsurge of wildfire activity there.