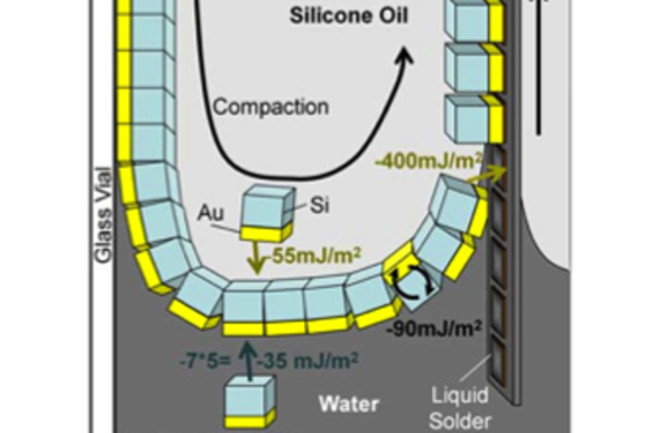 What if we could outsource the manufacturing process to the very things we're manufacturing? That's the tantalizing promise of self-assembling systems, in which scientists use the laws of nature to get components to organize themselves into, say, a computer chip. Or in this case, a solar panel. Researchers have announced the creation of self-assembling solar cells that rely on the a principle known to everyone who's ever made a vinaigrette salad dressing: that oil and water don't mix. The researchers' efforts to made a self-assembling solar panel had been unsuccessful for years, because the components were just the wrong size.

To get around this problem, the researchers designed a kind of conveyor belt. They made a solar cell substrate with regular depressions lined with low-temperature solder, which were designed to receive the individual solar cell elements. Each element had gold on one side and silicon on the other. The silicon side was painted with a hydrophobic molecule that is repelled by water, and was painted the gold side with a hydrophilic, or "water-loving," molecule. When the elements were dumped into a vial containing oil and water, the elements neatly lined up in a row at the boundary between the two liquids. Each element had its gold side pointed towards the water. In the study, published in the Proceedings of the National Academy of Sciences, the researchers describe how the solar cell took over the work from there.

The conveyor belt process is to simply dunk the [substrate] through the boundary and draw it back slowly; the sheet of elements rides up along behind it, each one popping neatly into place as the solder attracts its gold contact. The team made a working device comprising 64,000 elements in just three minutes.... The method tackles what [experts say] is the most challenging problem - the proper alignment of thousands of parts, each thinner than a human hair [BBC News].