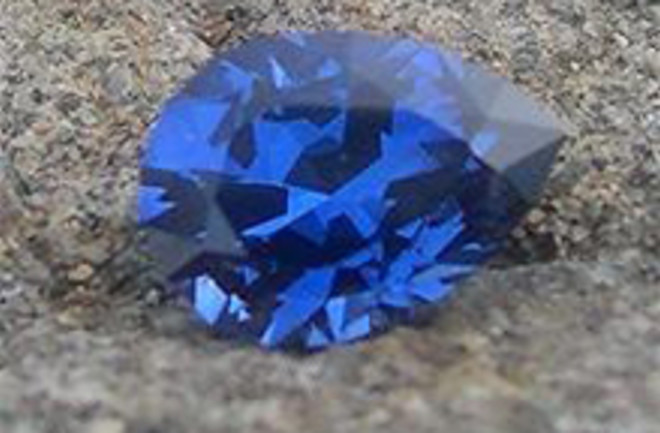 Sapphire crystals may be the next material to transform the electronics industry, thanks to nanotechnology researchers who have announced a new way of storing data that would fit the contents of 250 DVDs on a coin-sized surface. The study, published in Science, illustrates how nanoscale elements can organize themselves over a large sheet of semiconductor film. The researchers expect that when applied to electronic media, their discovery will improve the efficiency of data storage, savings which can then be transferred to improve other pieces of electronics besides just storage, like high-definition screens and solar cells. Similar attempts have previously been made to improve data storage on semiconductor films, but have consistently failed because the polymers—which are known to link together, on their own, in precise patterns—lose their organized structure when the film being used increases in area, rendering them useless for storing memory. Lead researchers Ting Xu from the University of California at Berkeley and Thomas Russell from the University of Massachusetts at Amherst overcame this by layering the film of block copolymers onto the surface of a commercially available sapphire crystal. When the crystal is cut at an angle—a common procedure known as a miscut—and heated to 1,300 to 1,500 degrees Centigrade (2,372 to 2,732 degrees Fahrenheit) for 24 hours, its surface reorganizes into a highly ordered pattern of sawtooth ridges that can then be used to guide the self-assembly of the block polymers [Science Daily]. With this technique, the only limit to the size of an array of block copolymers is the size of the sapphire, Xu said. Once a sapphire is heated up and the pattern is created, the template could be reused. Both the crystals and the polymer chains could be obtained commercially, Xu said [PC World]. The researchers say the technology could make nearly perfect arrays of semiconductor material that are about 15 times denser than anything achieved previously [Reuters]. Using the technology, it might also be possible to achieve a high-definition picture with 3-nanometer pixels, potentially as large as a stadium JumboTron, Xu said. Another possibility is more dense photovoltaic cells that capture the sun's energy more efficiently.... The new technology could create chip features just 3nm [nanometers] across, far outstripping current microprocessor manufacturing techniques, which at their best create features about 45nm across [PC World]. Related Content: DISCOVER: Think Tech One Hundred Movies on Just One Disk 80beats: Carbon Nanotubes Could Replace Platinum and Lead to Affordable Hydrogen Cars