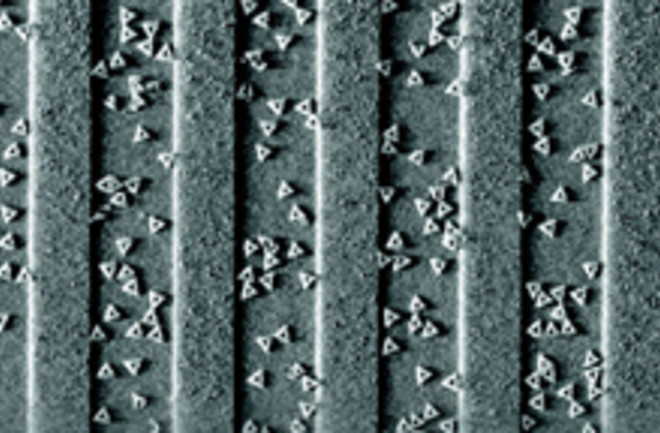 The next big leap in computing power may come from a surprising source: the genetic code. Researchers at IBM have found a way to use DNA strands as the scaffolding on which to place carbon nanotubes, creating tiny microchips that could eventually be more efficient and cheaper to produce than today's silicon chips.

The new process offers an entirely different route to miniaturization.

Microchips are used in computers, cell phones and other electronic devices.... Right now, the tinier the chip, the more expensive the equipment. [An IBM spokesman] said that if the DNA origami process scales to production-level, manufacturers could trade hundreds of millions of dollars in complex tools for less than a million dollars of polymers, DNA solutions, and heating implements [Reuters].

In the study, which appears in the September issue of Nature Nanotechnology, researchers explain that they started with the process of "DNA origami," in which scraps of virus DNA are coaxed into self-assembling in precisely folded shapes.

"The utility of this approach lies in the fact that the positioned DNA nanostructures can serve as scaffolds, or miniature circuit boards, for the precise assembly of components," according to IBM [CNET].

The researchers then layered millions of nanotubes over the scaffold, where they adhered to form tiny integrated circuits.

While the technology shows promise, it is years away from practical use, the scientists warned. "It's too early to say whether this will be a game changer," [IBM scientist Bob] Allen said. "But we're pretty enthusiastic about the potential of this technique" [PCWorld].