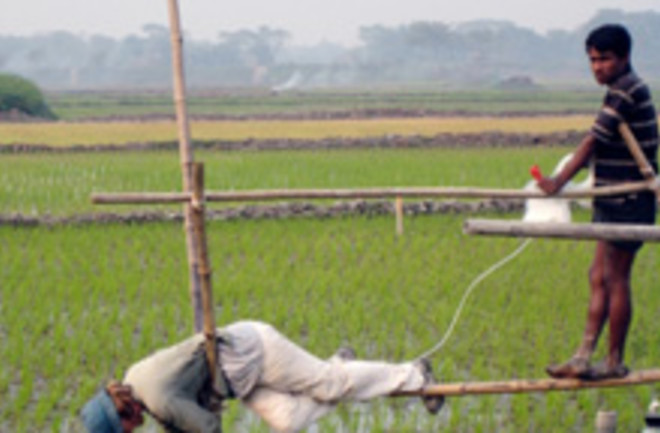 It was a twisted cycle: In the 1970s, Bangladeshis used surface ponds or rivers to collect rainwater for drinking. But thanks to garbage dumping and sewage, that water became a breeding ground for disease. So UNICEF sought to fix the problem—the agency helped residents drill simple wells that drew water from a shallow aquifer. But this remedy became a tragedy. Bangladesh's groundwater was laced with arsenic. Now, in a study in Nature Geoscience, a team from MIT has answered one of the outstanding pieces of the Bangladesh puzzle: Just how all that arsenic got into the water in the first place.

, and that river brought the arsenic to the region's sediments. But why doesn't it just stay in the sediments once it's there? Back in 2002, another MIT team began to answer the question by showing that microbes digest organic carbon in the soil in such a way that frees up the arsenic, but they couldn't say where that carbon itself came from until Rebecca Neumann and colleagues figured it out this year: man-made ponds left behind by excavations.

Using a six-square-mile test plot, they found that the organic carbon comes from shallow ponds that were dug to provide soil for flood protection. The carbon compounds sink in the pondwater and seep underground where bacteria digest them, setting up the perfect chemical conditions to free up the soil’s arsenic. Groundwater flow then brings the arsenic-rich water to the wells [Scientific American]

. Hopefully, these answers will help to turn around the Bangladesh disaster.

Around 25m people in the country have been exposed to arsenic through water. Experts have described the situation as the worst mass poisoning of a population in history [BBC News]

.There's no quick fix, but Neumann's team suggests two things: Digging deeper wells that go below the influence of the ponds, and using wells that retrieve water from beneath rice paddies, which the team found to be less toxic than wells in other places. Related Content: 80beats: Arsenic-Eating Bacteria May Resemble Early Life on Primordial Earth 80beats: Are Traces of Arsenic in Tap Water Linked to Diabetes? Discoblog: Did Arsenic Kill Napoleon? His Hair Says No DISCOVER: The 5 Most Creative Ways to Clean Up PollutionImage: Sarah Jane White, MIT. Researcher Rebecca Neumann hangs off the end of bamboo scaffolding to set up an experiment.