Are Traces of Arsenic in Tap Water Linked to Diabetes? 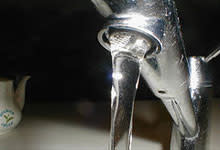 A new study has shown that people with small amounts of arsenic in their urine are more likely to suffer from diabetes, and raises the possibility that drinking tap water contaminated with trace amounts of arsenic may be a risk factor for the disease.

The [diabetes] risk was apparent at levels generally considered harmless and grew with increasing exposure [Bloomberg].

"It seems there is may be no safe level of arsenic," [lead researcher Ana] Navas-Acien said in a telephone interview. "Worldwide it's a huge problem" [Reuters].

Previous epidemiological studies in Bangladesh, Mexico, and Taiwan have shown that drinking water with high levels of arsenic in linked to high rates of diabetes. While safety standards for drinking water are much stricter in the United States, researchers say that 13 million Americans may be drinking water with arsenic levels that exceed federal guidelines. People in rural areas who drink well water may be particularly at risk, researchers say. Arsenic is a toxic element commonly found in rocks and soil, and which

can get into drinking water naturally when minerals dissolve. It is also an industrial pollutant from coal burning and copper smelting. Utilities use filtration systems to get it out of drinking water. Seafood also contains nontoxic organic arsenic [AP].

In the study, published in the Journal of the American Medical Association [subscription required], researchers

studied 788 adults who had their urine tested for arsenic exposure in the 2003-2004 National Health and Nutrition Examination Survey. Participants with type 2 diabetes had a 26% higher level of total arsenic in their urine than those without the disease [WebMD].

However, further research must be done to determine whether arsenic is damaging pancreatic cells in ways that could lead to diabetes, or whether diabetics are less able to metabolize arsenic and therefore excrete more in their urine.