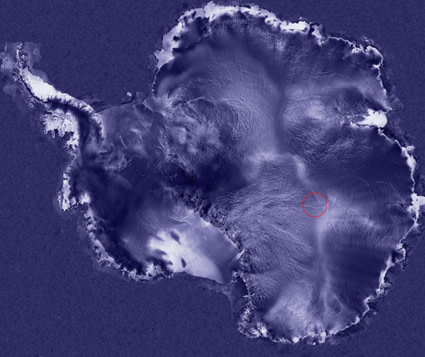 At the bottom of the ice sheet at the bottom of the world lies one of the most pristine and tantalizing places on the Earth—a lake beneath Antarctica that has been isolated for millions of years. Soon, humans will get a glimpse of Lake Vostok.

Since 1990, the Arctic and Antarctic Research Institute [AARI] in St Petersberg in Russia has been drilling through the ice to reach the lake, but fears of contamination of the ecosystem in the lake have stopped the process multiple times, most notably in 1998 when the drills were turned off for almost eight years. Now, the team has satisfied the Antarctic Treaty Secretariat, which safeguards the continent’s environment, that it’s come up with a technique to sample the lake without contaminating it. [Wired]

is nearly the size of Lake Ontario

. Its temperature actually remains a few degrees below freezing

, but the pressure on the water allows it to stay in liquid form. It's the isolation, though, that has everyone so excited. There are more than 150 lakes beneath the Antarctic

glaciers, but Vostok is the only one that's entirely cut off. It's impossible to say what kind of life could have evolved in its hyper-oxygenated waters (with 50 times the oxygen content of most lakes on the surface). That's why it has taken so long for Russia to get permission to drill down any further. Before drill teams enter Vostok, they need to be as sure as they can be about avoiding contamination.

The AARI's Valery Lukin says they have devised a clever method for sampling the lake without contaminating it. "Once the lake is reached, the water pressure will push the working body and the drilling fluid upwards in the borehole, and then freeze again," Lukin says. The following season, the team will go back to bore in that frozen water, take the sample out and analyse its contents. "The Russians really did a good job in giving answers to all the fears raised that their actions would contaminate this unexplored environment," says Manfred Reinke, head of the ATS. [New Scientist]

The Russians could reach the lake as early as late January. Lake Vostok is another reminder that Antarctica is not the homogeneous, monotonous mass of ice that it sometimes seems from afar. Beneath it surface there are also mountains as tall as the Alps

completely buried in ice, and on its surface there are "blood falls

" that gush forth iron-rich liquid, the handiwork of hardy bacterial colonies. One can only hope there are extremophile

80beats: NASA Finds Shrimp Where No Advanced Life Should Be: 600 Feet Beneath Antarctic Ice