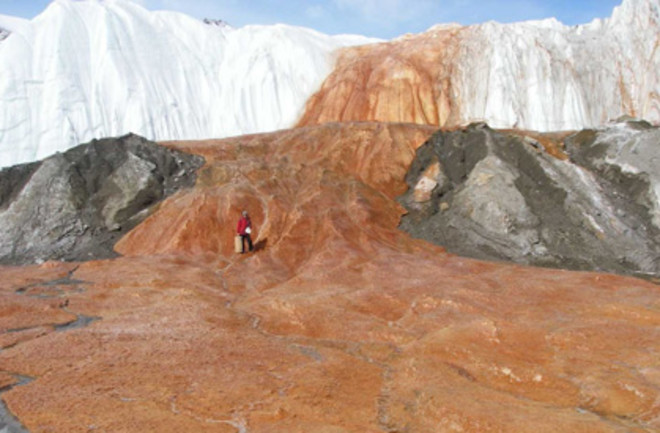 Life sure turns up in the darnedest places. The latest discovery comes from Blood Falls, a rusty red discolouration on the face of the Taylor Glacier in Antarctica [that] occasionally gushes forth a transparent, briny, iron-rich liquid that quickly oxidizes and turns red, staining the ice below [Nature News].

The source of that water is an intensely salty lake trapped beneath 1,300 feet of ice, and a new study has now found that microbes have carved out a niche for themselves in that inhospitable environment, living on sulfur and iron compounds. The bacteria colony has been isolated there for about 1.5 million years, researchers say, ever since the glacier rolled over the lake and created a cold, dark, oxygen-poor ecosystem.

In the sub-glacial lake, the microbes have no chance of getting energy through photosynthesis. Instead, the microbes live off the minerals that were trapped in the lake with them, the researchers explain in the study, published in Science. It appears that energy is obtained when sulfur is cycled through different oxidation states by reacting it with iron…. The oxidized sulfur is then used to react with carbon compounds, powering the metabolism [Ars Technica].

Similar critters may have lived 600 to 800 million years ago during the harsh epoch known as “snowball Earth,” when glaciers reached into the tropics, explains study coauthor Ann Pearson. Back then, photosynthesis probably ground to a halt across the planet, and marine bacteria may have only managed to eke out a living in the same way as those living under Taylor Glacier, Pearson says. “Life in sea water, as we know it, could maintain reasonable continuity through an event like this” [New Scientist].

And if life can thrive in one of the toughest environments on earth, maybe it has found a way to take hold elsewhere as well, says lead researcher Jill Mikucki. “If it can survive below this glacier, why not below the ice cap on Mars and on Europa?” asks Mikucki [Nature News].